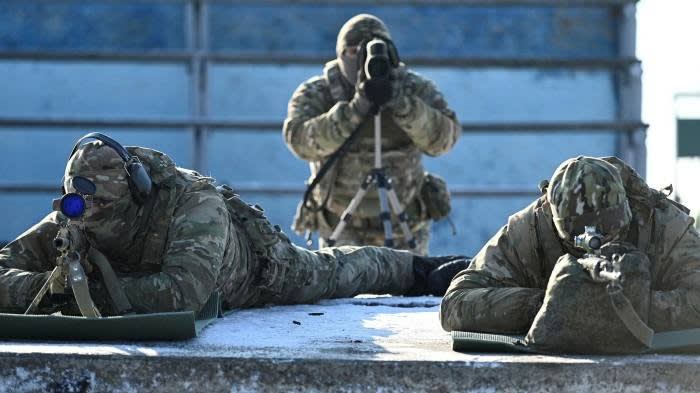 How well did you keep up with the news this week? Take our quiz.

Russia said talks with the US and Nato in Geneva and Brussels have failed to address its security grievances, casting doubt over whether a western diplomatic push will defuse Moscow’s threat of military action against Ukraine.

Dmitry Peskov, spokesperson of Russian president Vladimir Putin, said this week’s talks had been “unsuccessful” despite “positive elements” on issues Moscow did not consider central to its demands. “That’s bad,” he added. He said Russia would have the “political will” to continue talks if the west was willing to negotiate on rolling back Nato’s expansion.

Sergei Ryabkov, deputy foreign minister and Russia’s lead negotiator in the talks with the US this week, said discussions outlining Moscow’s grievances had run into a “dead end” because the US and its allies were only willing to consider issues such as arms control and force deployments, rather than the Kremlin’s main requests.

Thank you to those who took part in our poll on Wednesday. 78 per cent of readers said Boris Johnson should resign. Here’s the rest of today’s news — Emily

2. TPG hits $10bn valuation on first day of trading Shares of TPG, the private equity group co-founded by billionaires David Bonderman and Jim Coulter, became the latest to capitalise on soaring valuations by tapping public markets to finance growth. The stock opened at $33 a share, lifting its market capitalisation above $10bn.

3. Lithuania’s foreign minister calls on EU to stand up to China Europe needs to stand up to China’s “illegal” pressure on Lithuania and foreign companies operating there or risk damage to the international trade system, Gabrielius Landsbergis told the Financial Times.

4. UK trade minister insists ‘everything on table’ in India talks Anne-Marie Trevelyan said her team had “a broad mandate to crack on from cabinet”, including to address India’s demands of easier visa access for students and skilled workers. She said the UK wanted to finalise a post-Brexit free trade deal by early 2023, ahead of both Indian and British general elections the following year.

5. Prince Andrew to lose royal titles A statement from Buckingham Palace announced that Prince Andrew is to stop using the title “his royal highness” and lose his role as a royal patron to scores of organisations as controversy continues over his links with the convicted sex offender Jeffrey Epstein.

For more on how the global economy is bouncing back from the pandemic, sign up to our Road to Recovery newsletter.

US banks’ earning season JPMorgan Chase, Citigroup and Wells Fargo will kick off proceedings on Friday. Investors are watching out for updates on their outlooks for 2022.

Ashes Test cricket In Australia, the fifth and final Ashes Test match against England begins in Hobart. Australia leads the series 3-0 with one match drawn.

Don’t deride the Davos prophets of doom Each winter the World Economic polls its members about perceived risks. This year’s survey of Davos-goers is startlingly gloomy. Doubly striking is the detail about what scares the Davos elite, writes Gillian Tett.

Bridging the workplace generation gap Often in the workplace, there is a bit of dissonance between the “wisdom and experience” of Gen X and Boomers, and the “innovative energy” of those in their twenties and thirties. So what are the perks and pitfalls of working with people much older (or younger) than you? Isabel Berwick explores on the Working It podcast.

From the homespun wisdom of a cheerleading coach to how to deal with the “jerk” at work, here are this month’s top business reads.

Thank you for reading and remember you can add FirstFT to myFT. You can also elect to receive a FirstFT push notification every morning on the app. Send your recommendations and feedback to firstft@ft.com

#TechAsia — Your guide to the billions being made and lost in the world of Asia Tech. Sign up here