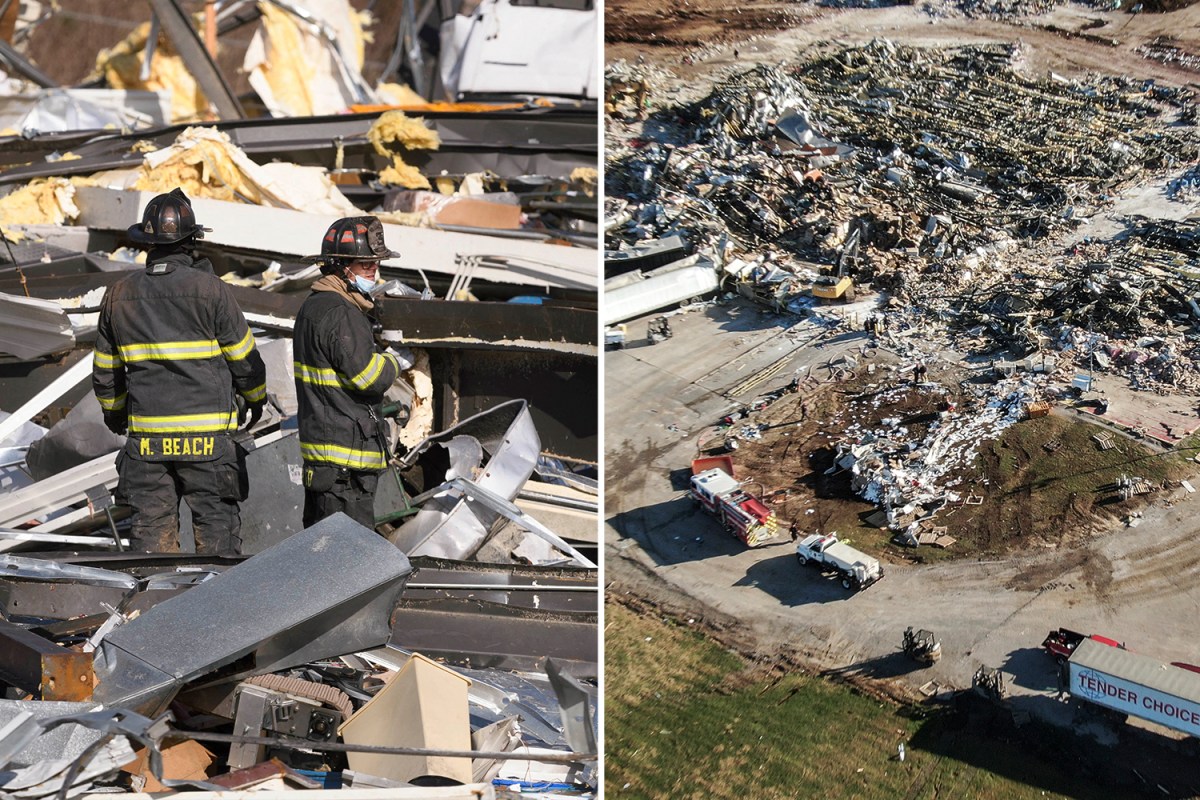 FACTORY collapse survivors are claiming their bosses threatened to fire employees if they left work before the tornado hit the building.

Mayfield Consumer Products candle factory workers who survived the tornado that struck Mayfield, Kentucky, on Friday have opened up about what happened when they wanted to leave work early to take shelter at their homes.

The twister ended up flattening the candle factory where around 110 employees were working a night shift.

At least five factory workers have alleged that supervisors at the building told employees that they would be fired for going home before their shift ended — even though they heard tornado sirens, NBC News reports.

More than a dozen workers reportedly requested to leave early and take shelter at their own homes, but they were denied.

And although some workers went home regardless of what they were told, others stayed and at least eight people died inside.

According to 21-year-old McKayla Emery, workers first requested to leave work early at around 5.30pm when sirens were heard.

Emery, who chose to stay at work and make extra money, spoke from her hospital bed — as she ended up getting struck by a piece of concrete in the factory, trapped for six hours, and obtained severe chemical burns and kidney damage.

“People had questioned if they could leave or go home,” she said, explaining how she heard managers tell four nearby workers: “If you leave, you’re more than likely to be fired.”

Elijah Johnson, 20, said: “I asked to leave and they told me I’d be fired,” prompting him to ask his boss: “Even with the weather like this, you’re still going to fire me?”

Forklift operator Mark Saxton, 37, said: “The first warning came, and they just had us go in the hallway. After the warning, they had us go back to work. They never offered us to go home.”

“Employees can leave any time they want to leave and they can come back the next day.”

The Sun reached out to the Mayfield Consumer Products candle factory on Monday but did not receive an immediate reply.

Only 40 out of 110 people working in the Kentucky candle factory when it collapsed were rescued from the rubble.

Kentucky Gov Andy Beshear said on Sunday that he believes more than 100 Kentuckians died in the tragedy and that another rescue from the factory is unlikely.

Dozens of workers are feared dead as the search continues in Mayfield.

“I’m not sure that we’re gonna see another rescue,” Beshear told State of the Union. I pray for it.”

The governor added that it “may end up being the largest loss of life in any tornado event in a single location in the state’s history.”

And on Monday, Beshear said the death toll reached 74.

Deaths confirmed in the state include a 5-year-old in Muhlenberg County and a three-year-old.

“This tornado didn’t discriminate. Anybody in its path, even if they were trying to be safe, again, just like nothing we’ve ever seen before.”

President Joe Biden has signed a federal emergency declaration for the state in response to the deadly tornadoes.

The National Guard has been activated as the state police lead the rescue operations.

“This tornado event may surpass the 1974 super outbreak as one of the most deadly in Kentucky’s history,” said Kentucky Emergency Management Director Michael Dossett.

A curfew remains in place for many of the hardest-hit parts of Kentucky as residents are urged to avoid the area.

“Citizens who are not actively involved in rescue operations or emergency services are encouraged to avoid travel to and around the affected areas,” a state police news release said.

“With widespread power outages, traffic control devices are not operational and there is no available lighting at many intersections throughout the area creating a serious hazard.”

The storm also killed several people in Arkansas, with tornadoes touching down in at least six states.

The storm ripped through parts of Missouri and Tennessee before traveling over 200 miles in Kentucky.

Kentucky state parks and 11 shelters have been opened for impacted residents.