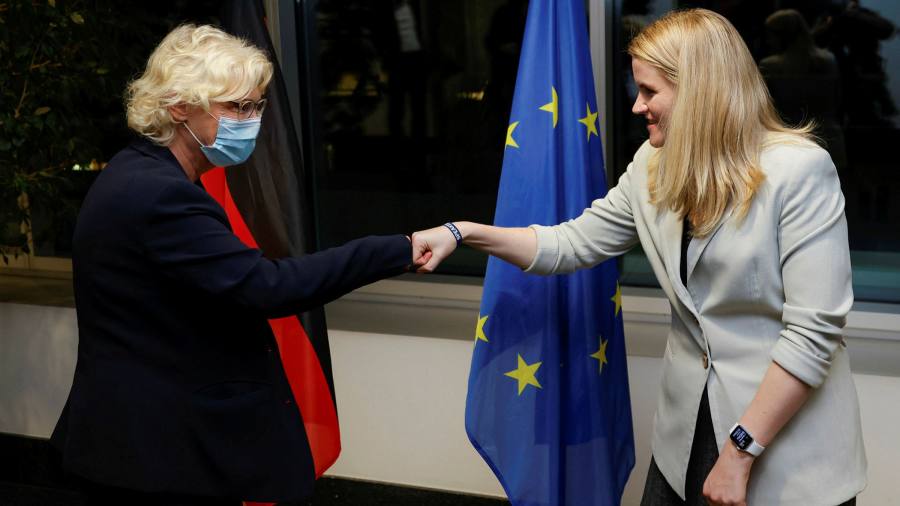 The whistleblower behind the Facebook Papers, Frances Haugen, is speaking in the European parliament in Brussels today as part of her extensive tour of European capitals (London, Berlin and Lisbon so far). We’ll look at what ammunition MEPs hope to gather from this hearing in their efforts to rein in Big Tech.

Also today (and tomorrow), finance ministers are gathering in Brussels first in eurogroup, then in full Ecofin format, to discuss inflation, energy prices and the commission’s recent proposals on how to approach a review of the bloc’s fiscal rules. I’ll unpack their agenda and what prospects are for progress, pending the formation of a new government in Berlin.

And on the Covid-19 vaccination front, we look at political tensions brewing in the Baltics, most strikingly between the president and the prime minister of Lithuania.

The controversial practice of targeted advertising is back in the spotlight today when Frances Haugen, a Facebook whistleblower, addresses lawmakers at the European parliament, writes Javier Espinoza in Brussels.

With an update of the bloc’s tech rules still under discussion, Brussels is feeling increased pressure from politicians, academics, activists and privacy watchdogs to introduce a ban or at least limit the extent to which companies including Google and Facebook (now known as Meta) are able to track users’ online behaviour and sell the resulting profiles for targeted advertising.

An outright ban would be a massive blow to Big Tech, as their core business model relies on the multibillion dollar adtech industry.

So far, the European Commission has been reluctant to include an outright ban. EU officials argue that the move is likely to disproportionately hurt small businesses, which rely on targeted advertising to let users on social media know about their products and services. Tech executives argue a ban is not needed if privacy rules are enforced properly.

That has not stopped the controversy around the practice. Earlier this year, MEPs from the centre-left Socialists and Democrats launched a campaign entitled #AdsZuck (a reference to Meta chief executive Mark Zuckerberg) which sought to gather signatures for a public petition calling for a total ban on targeted advertising. Some 2,000 people have signed the petition so far.

Today’s hearing (which you can watch live here from 16:45 CET) with Haugen is an attempt to gather more ammunition for the parliament’s stance that the planned update to the bloc’s tech regulation doesn’t go far enough.

Axel Voss, a centre-right German MEP involved in the negotiations on tech regulation, is likely to ask Haugen how to “prevent targeted ads from being tools for harmful content, for instance, for children, while not banning [it] altogether”, according to a person with knowledge of his question.

Haugen will know a thing or two about social media causing harm to children (Read her full profile). During her time at Facebook, she gathered a trove of documents exposing the company’s alleged culture of putting profits over the wellbeing of its users. Facebook has said she was a mid-level employee with no decision power who mischaracterised the way the company works.

Some are hoping her arrival in Brussels at a time of deep political divisions inside the parliament over the draft rules for the modern internet will help unblock the impasse on the day lawmakers were supposed to have a common position ready to be debated with member states and the commission.

According to the US-based activist group Avaaz, Haugen’s revelations are a “golden opportunity” to influence the last stages of the Digital Services Act. Avaaz says MEPs need to focus on three key battles: regulation of platform’s “harmful” algorithms, opening up of the platforms’ black box of data and stronger enforcement of EU rules.

Schwab said that the tech rules currently under discussion will not be enough to “tackle political advertising, fake news and foreign interference in domestic politics online”, urging the commission to “hurry” with its complementary proposals on these topics.

“We must never have another Cambridge Analytica 2.0 where personal data is abused for political gain,” Schwab said in reference to the UK data company that was hired by Donald Trump’s campaign to influence US voters in the 2016 presidential election. “Haugen’s revelations have shown that we cannot wait any longer,” Schwab said.

The UK government’s own independent climate adviser, the Climate Change Committee, estimates that eliminating net greenhouse gas emissions from the UK will come with a bill of £1.4tn by 2050. That is the equivalent of £1,700 a year on average for every household, coming on top of £3,000 of tax increases unrelated to climate change that Boris Johnson’s government has also imposed over the next few years. (More here)

EU finance ministers are gathering in Brussels today to have an exchange of views on how the bloc’s economic governance (and a return to the bloc’s fiscal rules in 2023) should be structured in the post-pandemic era, but without a new finance minister in Berlin the discussion isn’t likely to get very far.

As the FT wrote last week, the likelihood of fiscal hawk Christian Lindner being appointed at the helm of the Bundesfinanzministerium is raising alarm bells among economists.

Mindbogglingly, borrowing at zero or negative rates to save the planet continues to be a no-go for parts of the European political leadership

And with COP26 in Glasgow making abundantly clear that a lot more, not less, public spending will be needed to meet Europe’s greenhouse gas emission targets and transition away from fossil fuels over the next decades, analysts are starting to worry about where the EU’s finance ministers are headed.

“On present policy,” writes UniCredit chief economist Erik Nielsen in a note to investors, “such a boost to investment is made impossible by the combination of the EU’s fiscal rules and the political reality of not wanting to raise taxes or cut other expenditure in sufficient amounts.”

In an interview last week with the FT, Lindner said that “pressing on with an ultra-expansionary fiscal policy for Europe would be a big danger” — a position other fiscal hawks in the bloc are only too happy to endorse.

Other topics for discussion at today’s eurogroup and tomorrow’s Ecofin are:

Covid-19 cases are sky-high in the Baltic countries and so are political tensions, writes Richard Milne, Nordic and Baltic correspondent.

Most striking is the squabbling between Lithuania’s president and the government in Vilnius over pandemic measures.

Last week president Gitanas Nauseda vetoed a bill proposing that unvaccinated workers should pay for their own Covid-19 tests, causing prime minister Ingrida Simonyte to sharply criticise the head of state for interfering in Lithuania’s efforts to jab more people.

In a way, the tension is not strange. Nauseda beat Simonyte in the 2019 presidential election and state broadcaster LRT reports the two have not had their weekly official meeting in two months.

Nauseda and the government have found room to agree on foreign policy, taking the same tough line against Belarus and China and strongly proclaiming Vilnius’s defence of democracy and freedom.

But the timing of the latest squabble is poor. It came two weeks after Nauseda suggested the government had deliberately slowed vaccination efforts so as to humiliate him after he set a mid-July jab target of 70 per cent.

Covid numbers have been surging in the Baltics, recently putting all three states in the top 10 per capita worldwide, although there are signs they are starting to fall.

Covid-related political tensions are not confined to Lithuania.

Estonia’s new president, Alar Karis, also criticised the government in Tallinn, saying it had not done well enough, especially on communication. His comments followed the resignation of Estonia’s culture minister, reportedly the only member of government not to be fully vaccinated, after weeks of pressure over some of her sceptical views.

All three Baltic countries, and much of eastern Europe, are struggling with a fourth wave of Covid-19 due to lower-than-EU-average vaccinations. The political sniping is likely to continue.