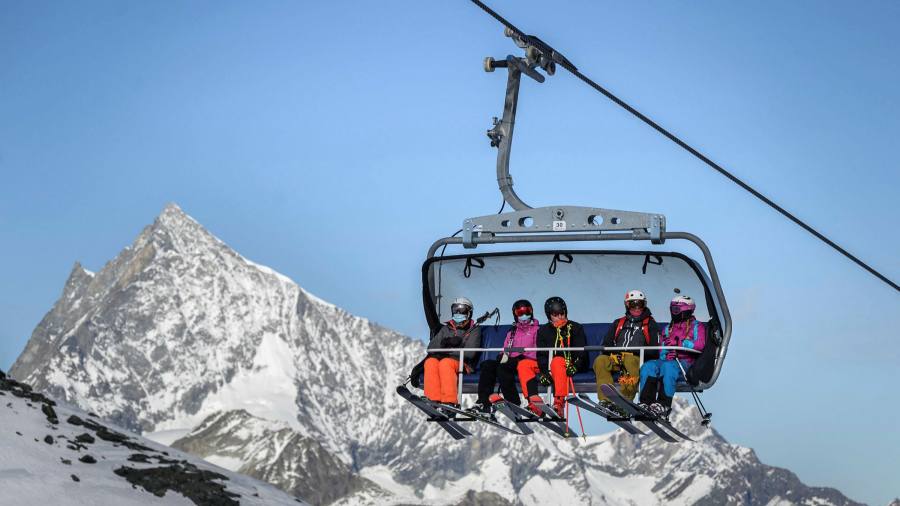 At the Findlerhof restaurant, high above the Swiss village of Zermatt, the terrace is packed.

On the first day of the season in one of Europe’s top ski resorts, staff are flitting between tables to pour chilled champagne and wine, switching between English, French, Italian and German as they welcome back guests from across the continent after almost two years of severe coronavirus-related disruption.

But the continuing uncertainty has made for a difficult few weeks as the restaurant prepared to open. The Findlerhof brings up most of its food and wine in October before the first snows set in, but this year it has brought in just half of what it would normally.

“We’re all a little more careful, especially here in the mountains,” said manager Francis Schwery. “We just don’t know if the government will close things down for one or even two months. Everyone is just a little more scared — the situation can change from day to day.”

Across the Alps, the winter season is off to a faltering start as memories of spring 2020 loom large. Then, Alpine resorts such as Ischgl in Austria became notorious as coronavirus superspreaders after remaining open even as the pandemic ravaged neighbouring Italy. Visitors from across the continent partied in packed bars and carried the virus home with them, prompting a wave of international condemnation.

This year authorities are acting with caution. Austria has been in lockdown since late November, and the country’s low vaccination rate, coupled with the emergence of the Omicron variant, has dashed hopes of an easy return to normal for its multibillion-euro mountain sports industry. Restaurants and bars across most of the country can open again from Sunday but in ski resorts must remain closed.

In France and Italy, nervousness about potential restrictions is palpable. Last season both countries moved early to shut ski resorts amid fears about repeating the first wave of the pandemic.

French prime minister Jean Castex said on a November trip to Manigod in Haute-Savoie that he wanted to guarantee a “dignified season”. Masks would be necessary on lifts, he said, but stressed the situation would need to be reviewed. Covid-19 certificates showing proof of full vaccination, a negative test or recovery from the disease will be required to access the slopes.

In Italy, only fully vaccinated visitors, those with a negative test or those who show proof of recovery will be able to access indoor public and entertainment spaces, including in ski resorts.

All visitors to Switzerland must take a PCR test before flying and a second PCR or antigen test between four and seven days after arrival. Bern announced on Friday that entry into hospitality venues would now require proof of vaccination or recovery from Covid-19. A negative test alone will not be enough.

On November 27, the federal government imposed a 10-day quarantine on arrivals from countries that had reported Omicron cases. Bern rescinded the requirement barely a week later, but in the Alpine cantons the damage was done — thousands of December bookings were cancelled.

According to the NZZ newspaper, one hotel in Zermatt lost €160,000 worth of custom the day after the quarantine was imposed.

Scott, a skier from London queueing in acid-yellow ski pants for a cable car, said the quarantine rule almost ruined his plans. “Normally I would be skiing as much of the season as I could,” he said. “It must be so damaging for local people . . . so much business lost. There needs to be consistency.”

The region pays a high economic price if the winter sports season is curbed. In the Alps themselves, winter tourism dominates local economies, accounting for up to half of jobs in some villages in the peak season. Skiing is responsible for about half of Switzerland’s tourism revenues, contributing about 2.5 per cent of gross domestic product, according to government statistics. In Austria the industry accounts for up to 4 per cent of GDP, official figures show. By comparison, carmaking in Germany accounts for 5 per cent of GDP.

Nobody wants a repeat of last season, when billions in revenues were lost. Confidence is crucial, says Martin Nydegger, chief executive of Switzerland’s tourism association. “Quarantines are tourism killer number one, there’s no sugar coating it.”

This year he estimates visitor numbers to the country’s slopes might amount to about 80 per cent of their 2019 peak if governments do not panic. He hopes Switzerland’s reputation for orderliness and cleanliness will give tourists the confidence that the country is safe and open.

“We have working vaccines, we have a test regime and we have 12 months more experience,” he said. “The pragmatic, liberal way is definitely in our interest.”

Despite the uncertainty, in Zermatt preparations are under way for the big parties of the festive season. Christine Villano, manager of Elsie’s wine bar, recalled last New Year’s Eve, when she had to throw away lobsters, caviar and oysters bought for a booked-out gala evening that was cancelled when the resort was locked down on December 28. They did not return to work all winter.

Villano remained hopeful for the coming weeks. On a recent Friday evening, Elsie’s was packed with visitors, ordering Bordeaux and Burgundy and enjoying platters of snails and melted Belper Knolle, a local cheese.

“We’re just not sure what the next few weeks will be like. We have to wait every day and see what’s happening with this new variant,” she said. “The government, of course, has to do what is best. But this has been going on so long, and we’ve done everything they’ve asked, with the vaccine, with masks, with distancing . . . we also have to think about our livelihoods.”