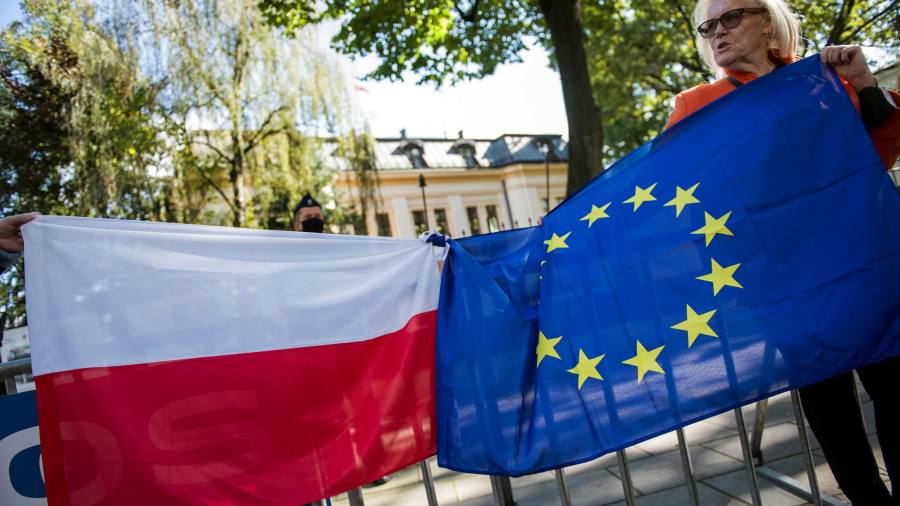 Poland and Hungary have two months to respond to a series of questions over alleged rule of law violations that could threaten their EU funding as Brussels steps up pressure over judicial independence.

On Friday, Brussels sent letters to the Polish and Hungarian ambassadors to the EU, which set out a detailed series of questions on possible breaches to the rule of law in Warsaw and Budapest and their implications for the protection of EU money.

The letters, seen by the FT, mark an informal step towards a decision in the coming months by Brussels over whether to trigger a new rule of law conditionality mechanism, which would permit EU funds to be held back.

Ursula von der Leyen, European Commission president, has said triggering the mechanism is one of the options on the table as Brussels responds to rule of law concerns in Poland.

The letter sent to Warsaw concerns judicial and prosecutorial services, while the commission has asked Hungary to provide information on the country’s system of public procurement and the independence of its courts.

The commission has been engaged in a long-running legal battle over changes to Poland’s court system that it says threaten judicial independence and the fundamental legal bonds that hold the EU together.

Poland’s ruling Law and Justice party says the changes are necessary to increase efficiency, and that Brussels has no right to intervene in what it regards as a domestic matter.

Tension between Brussels and Warsaw escalated in October when the country’s top court ruled that key elements of EU law were incompatible with its constitution.

Some member states and parts of the commission have called for the activation of the new conditionality mechanism, which could threaten tens of billions of euros in annual EU funds paid to Warsaw.

Hungary is due to receive €7.2bn from the recovery fund.

The letters sent to Warsaw and Budapest do not mark a formal triggering of the mechanism, but they are a step in that direction.

Hungary has been asked to provide clarification over “persistent” deficiencies and weaknesses in the country’s procurement rules that have stoked concern over corruption linked to the dispersal of EU funds.

Brussels has asked Viktor Orban’s government to provide a list of the 10 people or groups who receive the highest share of the billions of euros of EU farming subsidies that Hungary receives.

The letter to the Polish government contains a set of detailed questions about judicial developments.

Among the issues raised is a Polish court ruling this autumn that found parts of EU law were not compatible with the country’s constitution, as well as a July ruling about interim measures ordered by the European Court of Justice. The letter asks how Poland will ensure respect for laws regarding the protection of EU money, in light of those decisions.

The letter also raises questions about the Polish prosecutorial services, including the merger of the office of the Polish minister of justice with its prosecutor-general, as well as the dismissal of a number of prosecutors in recent years.

If the prosecution service is not properly effective and impartial, this could have implications for cases regarding the management of EU funds, the letter says.

The commission also raises questions over the pursuit of corruption and conflict of interest cases in Poland, asking whether cases involving the use of EU money will be properly handled.

Challenges to the independence of the Polish judiciary could also affect the “effectiveness and impartiality” of judicial proceedings relating to the management of EU funds, the commission said, “creating a risk to the protection of the financial interests of the European Union.”

Poland is under pressure to dismantle a controversial disciplinary chamber for judges that the European Court of Justice has found to be illegal.

Polish officials did not immediately respond to requests for comment.