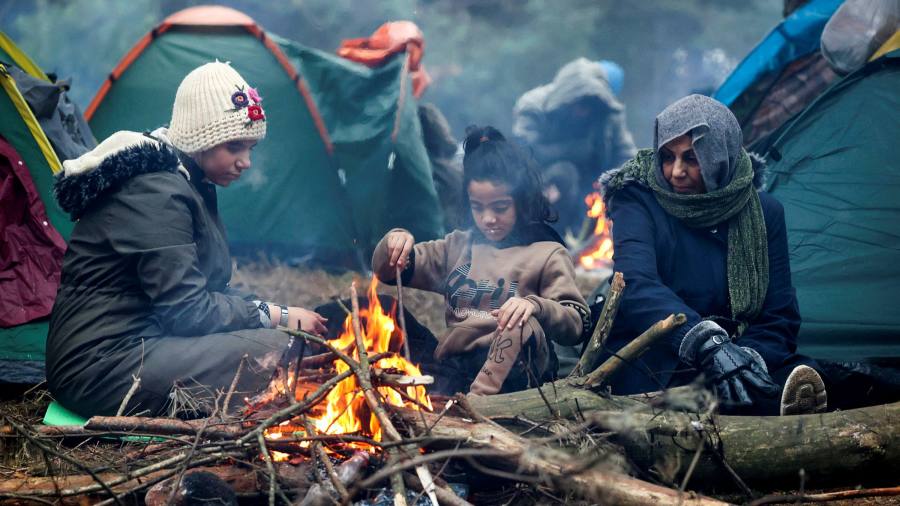 Brussels has vowed to broaden its sanctions on Belarus as it accused the country of seeking to destabilise its democratic neighbours by engaging in a “cynical” power play over migration on its borders with EU member states.

Ursula von der Leyen, the European Commission president, said during a visit to Washington DC that Brussels would widen its measures early next week, targeting both individuals and also “entities”. She warned that Belarus’s authoritarian leader, Alexander Lukashenko, needed to understand his behaviour carried a price.

Thousands of migrants have attempted to enter the EU via its eastern border in recent months, many of them having arrived in Belarus by air from countries including Iraq, Syria and Yemen, some via hubs such as Dubai.

European officials say the surge is being orchestrated by Minsk in an effort to destabilise the EU, describing it as a “hybrid attack” on the union.

Emerging from a meeting with US president Joe Biden on Wednesday, von der Leyen said the situation was a challenge to the whole of the EU, adding that “we have to protect our democracies from this kind of cynical geopolitical power-play”.

“We will widen our sanctions against Belarus very rapidly at the beginning of next week,” she said. There would also be an examination of the possibility of sanctioning airlines that facilitate human trafficking into Minsk and then onwards towards the EU-Belarus border, she added.

Earlier, Polish prime minister Mateusz Morawiecki accused Belarus of “state terrorism” for engineering a migration crisis on its border and called for EU action against the airlines bringing migrants to the region.

Morawiecki said the EU had to discuss “an effective blockade of flights from the east to the west”, without specifying what form that might take. “There is no doubt that Lukashenko is responsible for this crisis. We have to increase the pressure [on him] through the mechanism of sanctions,” Morawiecki added.

EU officials are expected to finalise more sanctions on Minsk in the coming days. Belarus is already under EU sanctions after Lukashenko cracked down on protests last year following his disputed re-election.

Morawiecki was speaking after a meeting with European Council president Charles Michel, who said it was legitimate for Poland and other countries to ask for EU funds to be spent on border fences and walls.

“It is legally possible for the EU to have a physical infrastructure. But that is a decision that the EU commission has to make,” said Michel.

Von der Leyen has previously said “there will be no funding of barbed wire and walls” from the EU budget after coming under fire from leaders including Hungary’s Viktor Orban and Denmark’s Mette Frederiksen at a tense summit last month.

The commission has said EU funds can support member states’ border infrastructure such as surveillance and the use of drones, but ruled out barbed-wire fences.

The Kremlin said Putin had proposed that EU and Belarusian representatives meet to discuss the surge of migrants. But Russian officials also accused the EU of creating a “humanitarian disaster” and trying to “smother” Belarus by planning to close the border.

Putin told the Europeans to talk directly to Lukashenko, said a senior EU official familiar with the Merkel-Putin call on Wednesday.

“He insists on direct contacts with the EU,” the official said. EU officials have not been able to talk directly to Lukashenko since the crackdown following the 2020 elections.

Kremlin spokesman Dmitry Peskov said Poland’s claim that Russia was behind the crisis was “absolutely irresponsible and unacceptable”, but added that Moscow was “already providing all necessary assistance to Belarus”, according to Interfax.

The crisis on the Poland border has been smouldering for months, but erupted on Monday when a group of hundreds of migrants attempted to break through the border near the village of Kuznica en masse.

Mariusz Blaszczak, Poland’s defence minister, said on Wednesday that it had “not been a calm night” at the border. The border guard said 599 attempts were made to breach the frontier, with nine people arrested and 48 expelled from Poland.

Polish officials estimate there are about 3,000 to 4,000 migrants on the border, many in makeshift camps.

Human rights groups have criticised the Polish government for passing legislation allowing migrants found on its territory to be pushed back into Belarus.