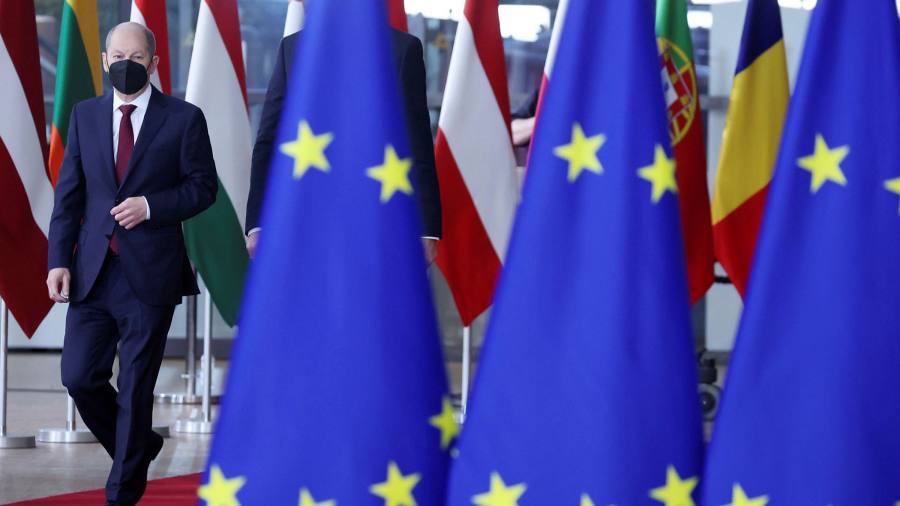 EU leaders have agreed to co-ordinate with allies over potential sanctions against Moscow in the event of an invasion of Ukraine and charged the bloc’s officials with preparing punitive measures that could include cutting Russian banks off from the international Swift network.

Under pressure from the US to back threats of crippling financial restrictions against Russia aimed at deterring Vladimir Putin from any military action, they agreed in a closed-door meeting in Brussels to draw up options for potential sanctions, officials said.

The EU has sought to avoid public discussion of specific measures, arguing against putting precise options on the table before it knows what action — if any — Putin might take.

But a growing number of member states have called for a stronger stand towards Moscow, which has deployed more than 100,000 troops in recent weeks on its south-western border with Ukraine.

“We discussed the measures we should take, and which we can take in the event that we don’t succeed in ensuring that things stay peaceful,” German chancellor Olaf Scholz told reporters following the talks. “We are evaluating the different measures, checking what effect they would have, how efficient they would be. But that is just the preparation for an eventuality that should not happen.”

EU leaders agreed that “any further military aggression against Ukraine will have massive consequences and severe cost in response, including restrictive measures co-ordinated with partner[s]”.

They also agreed to continue encouraging “diplomatic efforts, especially in the Normandy format to achieve the full implementation of the Minsk Agreements”, referring to the group of Russia, Ukraine, France and Germany that agreed as-yet unfulfilled peace terms over the war in eastern Ukraine.

Ursula von der Leyen, European Commission president, said following the leaders’ discussions that co-ordination with allies including the US on potential sanctions had already begun and that the commission had a variety of options available.

“We are able to read the signs and we are prepared,” she said. “It is a very clear message.”

The list of possible sanctions to be prepared by Brussels officials will include cutting Russian banks off from the Swift network that facilitates global money transfers, an escalation of financial restrictions that would make it difficult for Russian corporates to do business with the rest of the world, people briefed on the discussions told the Financial Times.

Other potential measures included targeted sanctions against private Russian banks, restrictions on certain technology exports to Russia — including those related to the telecommunications and chemicals industries — and individual injunctions against Russian oligarchs.

But German officials said no concrete sanctions were discussed in Thursday’s meeting. They added that it was important to consider what damage any particular sanction might inflict on the EU itself.

US intelligence shared with EU and Nato allies last month outlined a large-scale deployment of troops, tanks and electronic warfare equipment on the Ukraine-Russia border and warned an invasion could be undertaken within weeks. Nato has said that deployment has continued since.

Nato’s North Atlantic Council on Thursday said it was “seriously assessing the implications for Alliance security of the current situation” and it would co-ordinate with the EU and other partners regarding its response.

“We will always respond in a determined way to any deterioration of our security environment, including through strengthening our collective defence posture as necessary,” the NAC, the military alliance’s political decision-making body, said in a statement. “Nato will take all necessary measures to ensure the security and defence of all Nato allies.”

A number of EU leaders used the discussion on the crisis — conducted without phones or aides in the interests of discretion — to stress that Europe needed to play a role in defusing the crisis and not allow Russia and the US to dictate decisions that had an impact on the continent’s defence and security, officials told the FT.

US president Joe Biden, who held a telephone summit with Putin last week, has said he is open to further talks over Russian opposition to Ukraine’s ambitions for Nato membership and allegations that the alliance’s expansion into eastern Europe threatens Moscow.