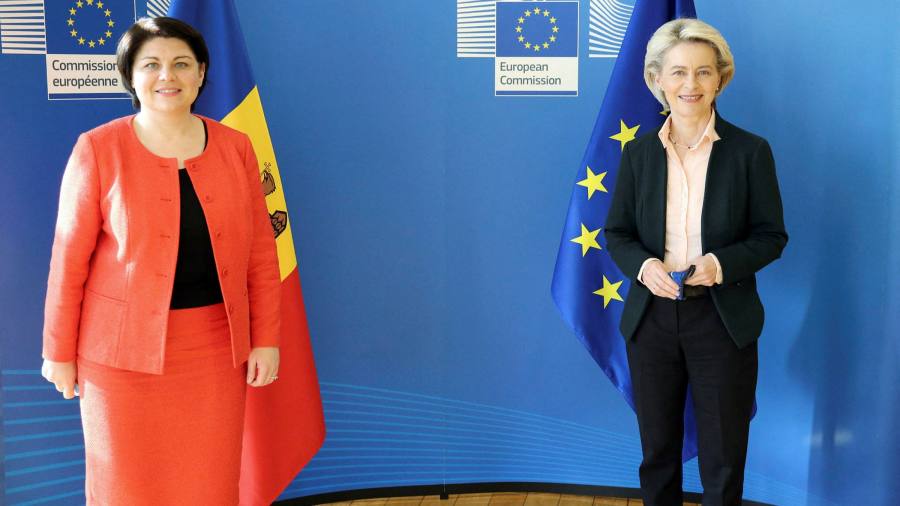 Moldova’s pro-EU government has fallen on hard times, with Russia’s Gazprom demanding weaker ties to the bloc if the country wants to renew its gas supply contract for the winter. Moldova’s Prime Minister Natalia Gavrilita is in Brussels since yesterday to seek EU help. On the table is an initial payment of €60m, which is a good start but not even close to enough. We’re exploring why the EU is taking this piecemeal approach and what perspectives the country has further down the line.

In Brexit news, France is threatening the UK with beefed up custom checks on imports and cutting off electricity supplies, after the two parties failed to agree on fishing rights.

On the technology regulation front, more delays are ahead, allegedly because of an upcoming visit of the whistleblower responsible for Facebook’s latest troubles. We’ll look at what the real reasons for the delays are.

And with Luxembourg’s Prime Minister Xavier Bettel in somewhat warmer but not exactly hot water over student-time plagiarism, I’ll check in on how the enfant terrible of European Council is faring compared with politicians next door in Germany.

You got to start somewhere

Desperately short of gas heading into winter and faced with geopolitical blackmail from its sole supplier, Russia’s Gazprom, Moldova might have been hoping for more than just €60m in emergency cash from its friends in the EU, write Henry Foy in Brussels and David Sheppard in London.

The money, agreed yesterday at crisis talks between Prime Minister Natalia Gavrilita and European Commission president Ursula von der Leyen, is equivalent to about 20 days of gas supplies for the cash-strapped country. So if Chisinau is going to survive the winter without striking a deal with Moscow, they are hoping that this is the first of many cheques from Brussels.

The former Soviet state declared a state of emergency this month after Gazprom cut supplies by a third and warned it would turn off the taps altogether if Moldova didn’t agree to a new deal at a vastly inflated price.

Part of that is down to the market. Global gas prices have been squeezed higher by a supply shortage and Europe has been particularly hard hit. But part of it is political: Gazprom has tied cheaper gas to Chisinau repealing parts of its EU trade deal and reform measures agreed with Brussels. Talks in St Petersburg yesterday with the Kremlin-controlled company ended without a deal.

Gavrilita’s newly elected, enthusiastically pro-EU government is desperate not to cave to Russian pressure. But the brutal truth is that winter is coming, and right now, gas isn’t. Moldova, excluding the Russian-controlled breakaway territory of Transnistria, needs at least 3m cubic metres of gas each day, which at current European benchmark market prices works out at a daily cost of roughly €3m, according to traders.

Moldova has some financial flexibility but not enough to cover that for the next five months. Here’s where Brussels comes in. Von der Leyen has said the EU “stands with Moldova”, and has worked to make sure member states are ready to provide gas to Moldova — as Poland and Romania did this week. But given the shortage of gas across Europe, no one will be making shipments for free.

“One of the big issues for Moldova is that the price they’ll get buying from European suppliers is almost certainly at least as high as they would get from Gazprom,” said Tom Marzec-Manser at ICIS, a consultancy. “The Russian view is that if Moldova wants to be more western then here’s the western price — as it’s Europe that pushed for hub-linked pricing in the first place.”

Gavrilita knows that either selling out her western ambitions to Gazprom, imposing sky-high energy prices on Moldova’s 2.6m population this winter, or running out of gas would cripple her pro-EU administration just as it is getting started. Which means there had better be some more from where yesterday’s €60m grant came from.

The prime minister said she was “deeply touched by the EU show of solidarity”. Back home, officials told Europe Express that it was “a symbolic amount” — but just the first step. Chisinau is also in talks to receive $85m from the IMF in December and €100m from the European Bank for Reconstruction and Development before the end of the year, and is hopeful that the EU could provide multiples of those amounts in repayable loans.

EU-Moldova talks continue today in the more formal Association Council meetings, where gas is officially just an agenda item. But don’t expect Gavrilita to spend much time on the rest of the topics — including political reforms and trade — getting enough cash to get enough gas to survive til spring is the only thing on her mind.

Brussels found 66 countries with which it has enhanced trade arrangements have erected barriers that contravene them, according to a report by its chief trade enforcement officer. (More here)

What to do when you run out of reasons why a piece of legislation is getting kicked in the long grass? Hide behind a hearing with a famous whistleblower, writes Javier Espinoza in Brussels.

In theory, everyone in Brussels agrees the draft laws aimed at curbing the power of Big Tech must come into effect fast. Many argue that while lawmakers are fighting over the small print, big players such as Google and Facebook are rapidly scooping up smaller competitors and conquering markets.

But that small print is still hampering a unified view in the European parliament needed for negotiations to start in earnest with member states and the European Commission. The parliament has postponed a key vote next month that would have consolidated that common position — officially because Frances Haugen, a Facebook whistleblower who has helped trigger the company’s worst crisis since Cambridge Analytica, is visiting the European parliament then her views must be heard before the vote.

Nov 8th @FrancesHaugen is attending the IMCO committee. We have decided to postpone the votes on the DSA /DMA in order to have a chance to take her statements into account. The new date of vote will be considered together with the IMCO chair and announced later. @Andreas_Schwab

That may be partially true. But the lack of consensus over which companies should fall under the scope of the new legislation was the main reason for the delay, according to multiple people with intimate knowledge of the discussions among European lawmakers.

Evelyne Gebhardt, a German MEP involved in the discussions said it plainly after a key meeting on Tuesday did not yield satisfactory results: “We agreed that we disagree.”

The sticking points? The Socialists are pushing for smaller companies, not just Google, Amazon, Facebook and Apple, to be included — for instance Booking.com. But the largest group in the parliament, the centre-right European People’s party, is opposing this.

The commission, which originally proposed the new rules, is worried where the debate is heading. A senior EU official told Europe Express that they were worried the Socialists and Democrats were “having a parallel discussion and trying to turn the legislation into consumer protection law, which it is not”.

There are some silver linings. Already two committees with representatives from both the EPP and the S&D have reached compromises. Rasmus Andresen, a German Green MEP, said these compromises should be used as a blueprint to move towards a solid parliamentary position. “We need more compromises to ensure we have a strong majority. The key is to end up with a united parliament,” he said.

Just don’t expect things to move fast as we see the first of potentially more delays. “Rushing too much risks defective laws. We need to make the DMA future proof,” said Paul Tang, a Dutch MEP with the Socialists.

And it’s not just the parliament that needs to move but also member states, which have yet to agree on a common position, and are still being lobbied to make changes to the draft. A group of chief executives from eight tech companies, including the Netherlands’ Booking and Germany’s Zalando, wrote to EU economy ministers yesterday, warning that the Digital Markets Act risked undermining European companies by capturing more groups than it intended.

More delays, whistleblowers or not, were “very likely”, said a seasoned Brussels observer.

Luxembourg’s Prime Minister Xavier Bettel is known for his quirky, candid and sometimes abrasive comments when he joins fellow EU leaders at summits or when he hosted UK PM Boris Johnson for talks that ended so acrimoniously Bettel held a press conference alongside an empty podium set.

Yesterday, the reason he became viral on social media wasn’t health-related (he contracted Covid-19 this summer and had to be hospitalised). It was because he had allegedly copy-pasted the vast majority of his 1999 thesis at a French university, at the end of a programme equivalent to a masters degree today, according to an investigation by Reporter.lu.

Out of the 56 pages Bettel wrote on the topic of EU election reform, only two — the introduction and conclusion sections — were not plagiarised, the investigation revealed, and 20 pages were lifted straight from the European parliament’s website.

Bettel did not deny the plagiarism accusations and said the university should review whether the paper still meets the criteria in force at the time: “From today’s point of view, I recognise that it could have — yes, maybe should have been done differently,” he said.

His laid-back attitude and the low likelihood that any of this will have political consequences for him stand in stark contrast with politicians in neighbouring Germany, where even the faintest hint of plagiarism can completely annihilate careers.

German Green co-leader Annalena Baerbock’s lacklustre election performance was in part because of accusations that she failed to correctly attribute several passages in her book that were lifted from other sources.

Other politicians, including ministers who were at some point in line to become Angela Merkel’s successor, had to step down because of plagiarism. Case in point: Former defence minister Karl zu Guttenberg (full name: Karl-Theodor Maria Nikolaus Johann Jacob Philipp Franz Joseph Sylvester Buhl-Freiherr von und zu Guttenberg) had to step down in 2011 from all political posts after it emerged he plagiarised his PhD thesis.

When explaining himself yesterday, Bettel said he wrote the paper “to the best of my abilities” — the exact wording zu Guttenberg used 10 years ago, as Luxembourg reporter Diego Velazquez pointed out.

#FunFact: @Xavier_Bettel even plagiarized his statement against the recent #Plagiarism accusations from a 2011 Karl-Theodor zu Guttenberg statement: pic.twitter.com/1ZwwH01Kwy

An appeasing reaction came also from the French professor who was Bettel’s supervisor at l’Université de Lorraine in Nancy. Etienne Criqui told Paperjam that there was no possibility at the time to use IT programs to detect plagiarism. “One shouldn’t judge something that was done over 20 years ago,” he said.

This is the latest step of an operation aimed at detaching from Poland influence on the system of our state. It is usurpation and blackmail