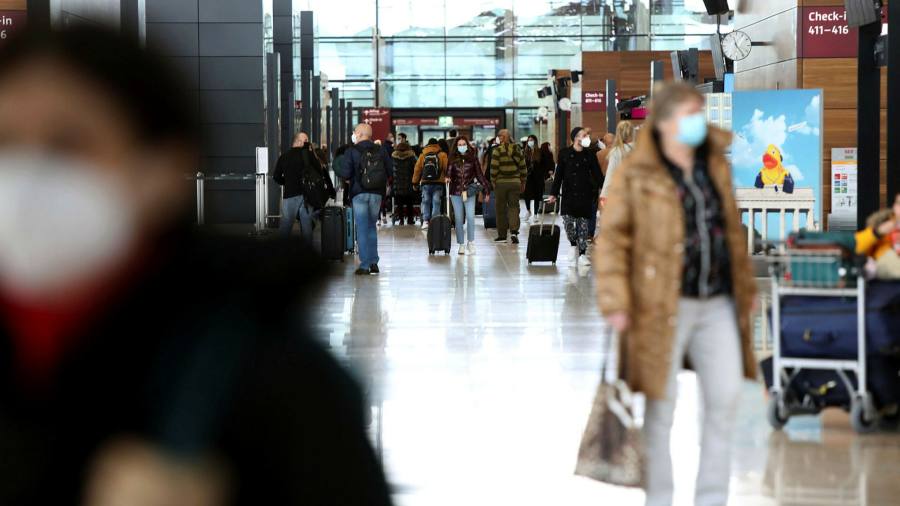 EU’s barely six-month-old digital Covid-19 certificate, announced with great fanfare in July as a means to boost travel across the bloc, is facing some existential problems.

The European Commission had designed the system to be valid for a year, but some countries have gone ahead and limited the validity of people’s vaccination status to as short as six months from the second shot.

We’ll bring you up to speed with the latest thinking and what to expect tomorrow when the commission puts forward its proposals on how to keep the pass alive even as countries have very different approaches to booster jabs.

Meanwhile, in Germany, the central bank has thrown its weight behind hawkish voices calling for a speedy return to fiscal rules. In its latest monthly report, the Bundesbank is seeing no reason why the suspension of the country’s “debt brake” shouldn’t end as soon as next year.

And in Swedish politics, the country’s potential new prime minister, Magdalena Andersson, is facing an uphill struggle in cobbling together the majority needed both for her taking office and for passing the country’s budget.

Resurgent infection rates in the EU are again raising the spectre of a fragmented approach to battling Covid-19 between different member states, write Sam Fleming and Mehreen Khan in Brussels.

In an attempt to keep a lid on the disharmony, the European Commission has been discussing an update to its digital Covid-19 certificate, which has been seen as a success story when it comes to reviving free movement between member states over the summer holidays.

Stella Kyriakides, the EU health commissioner, confirmed yesterday that Brussels is working with the “utmost urgency” to ensure rules for free movement within the union remain co-ordinated. That meant looking at the length of the validity of the certificates and the role of boosters, she told MEPs.

At issue is evidence of waning immunity after two vaccinations, which is raising the question of how long the certificates should last. One of the options is to set the validity at up to 12 months after the second jab. But the commission is also looking at how to recognise boosters on the certificates.

Kyriakos Mitsotakis, prime minister of Greece, last week said a third jab should be required after six months to keep the certificates valid.

Brussels would come up with “specific proposals” on free movement and the certificates this week, Kyriakides told the European parliament in Strasbourg yesterday, as she stressed the risks of fragmentation. “We are aware we need to give clear, coherent messages to citizens.”

Administering booster shots poses a practical and technical issue in many parts of the EU. Not only is access to additional jabs varied across member states, but in countries where they are available, recipients may not always have the shots logged in their digital Covid-19 certificates.

The French government has said that over-65s will have their existing vaccine passes annulled by December 15 unless they have received a booster or if they are still within six months of their second jab. Austria earlier this month lowered the expiration date from 12 to nine months after the second shot.

European affairs ministers will discuss boosters and broader co-ordination over social restrictions at a meeting in Brussels this morning. Some diplomats are already warning that any commission attempts to impose binding new legal requirements on how and when Covid passes should be valid, will be met with short shrift. “This is still for governments to decide,” said one diplomat.

Germany’s central bank has said the country’s new government should reinstate the rules of Germany’s “debt brake” next year — advice that could prove hard for some of the coalition partners to accept, writes Guy Chazan in Berlin.

The debt brake, which is inscribed in the German constitution, puts strict limits on new government borrowing. It was suspended when the coronavirus pandemic necessitated a massive ramp-up in spending to save the country’s economy from collapse, and will not apply in 2022 either.

But in its latest monthly report, the Bundesbank says it should be reinstated next year. There is, it says, “good reason to believe that 2022 will not be a crisis year”. “This means that there should be comparatively little need for pandemic-related government expenditures,” it adds.

The bank says there is a “general expectation”, partly reflected in the German government’s own forecasts, that “normal economic conditions” will return soon, and cites the latest estimates that tax revenues will probably exceed pre-crisis expectations.

Based on that, any decision to suspend the debt brake for another year “does not appear warranted as things stand”. “At all events, it would be extremely difficult to justify financing non-crisis-related budgetary burdens through borrowing made possible by the [temporary suspension of the debt brake],” it says.

The Bundesbank’s intervention comes with negotiations still ongoing between the Social Democrats (SPD), Greens and liberals on forming a new “traffic light” coalition government — talks in which fiscal policy has emerged as a big bone of contention.

The liberals (FDP) want a quick return to fiscal orthodoxy while the Greens campaigned on a platform of reforming the debt brake to allow for massive investments in halting climate change and upgrading Germany’s shabby infrastructure.

Though the coalition partners are staying mum, it is believed that one compromise solution would see the creation of off-balance sheet funds that wouldn’t count towards budgetary spending. That would allow the new government to ramp up investment while still complying with the debt brake.

The Bundesbank is sceptical. Such reform ideas are, it suggests, just a way of “hollowing out and circumventing the debt brake”. They would mean that Germany would no longer be in compliance with European fiscal rules, it adds. (Those fiscal rules are also suspended, at least until 2023, and several countries are asking for a revamp that would allow more carve-outs for investments.)

The bank says that if the new government wants to change Germany’s restriction on new borrowing, the reforms “should be discussed openly and, where necessary, given a new legal grounding”. But it’s very much of the opinion that such changes are not really needed. “The debt brake has proved its worth so far, and adjustments do not appear urgently necessary,” it says.

An increasing number of EU member states are luring the super-rich with preferential tax deals: between 1994 and 2020, the number of special tax regimes has increased more than fivefold, according to this study published by EU Tax Observatory. The most attractive tax regimes have been created by Italy, Greece, Cyprus and Portugal, the study shows.

Tomorrow promises to be a day of high drama in Sweden’s parliament. First up will come a vote on whether Andersson, the new leader of the centre-left Social Democrats, will become prime minister to succeed Stefan Lofven who resigned earlier this month.

She needs to ensure a majority does not vote against her; in practice, that means she needs the backing of both the far-left Left party and the nominally centre-right Centre. Centre appear to be on board but have demanded the Left have no influence over the government.

Talks between Andersson and the Left failed to make a breakthrough over the weekend so the Social Democrat leader will spend the next 24 hours frantically negotiating with the ex-Communists, who have made it clear they will vote against her absent an agreement.

The second vote, tomorrow afternoon, will be on next year’s budget, which Andersson formulated in her role as finance minister. Lofven was twice forced to rule with an opposition centre-right budget, a fate she will be desperate to avoid.

The short-term backdrop to all this uncertainty and frantic behaviour is that if Andersson fails to gain support to become prime minister, early elections in three or four months’ time are possible. Elections would then have to be held again, as scheduled, in September. Few parties want two votes within a year.

The longer-term reason, as this piece explains, is the rise of the rightwing Sweden Democrats. They are getting close to their goal of establishing a conservative bloc, together with two more mainstream centre-right parties. Any slip up by Andersson and they are waiting in the wings.

By the end of winter, everyone in Germany will probably be either vaccinated, recovered or dead

Join us in partnership with ETNO for our Tech & Politics Forum on November 29 where industry CEOs, policymakers, and investors will gather to debate the new transatlantic tech playbook, the infrastructure investment challenge and the role of cloud and data services.