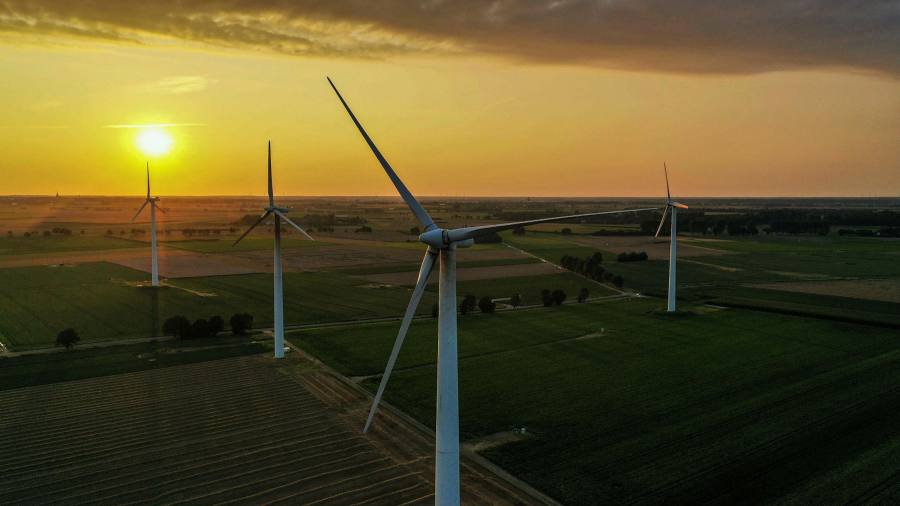 The last week at full intensity before the winter holidays is kicking off today with a gathering of foreign ministers under pressure from the US to agree sanctions aimed at deterring Russia from invading Ukraine.

EU leaders meeting in Brussels on Thursday for their last summit of the year are then expected to discuss the options. More on this later.

On the rule of law front, German chancellor Olaf Scholz yesterday telling reporters in Warsaw he hoped Poland and the EU would find a solution to their current stand-off.

Our main item today will look at a budding discussion about the possibility of a sequel to the bloc’s unprecedented €800bn post-pandemic recovery plan — to fund the EU’s green transition.

While the landmark NextGenerationEU recovery fund was formally designed to be a one-off, advocates have always quietly hoped it will provide a Rubicon-crossing precedent for more common borrowing in the future, writes Sam Fleming in Brussels.

Now those voices are growing louder.

At an FT conference last week, Paolo Gentiloni, the economics commissioner, argued that if the recovery fund succeeds it can serve as a template for new investment vehicles supporting EU priorities.

One such idea was a green investment fund, he said — a concept that was also floated by the IMF in its recent Article IV statement on the euro area economy. “It’s one of the possible ways to address a problem which we all recognise — how do we keep a decent and possibly strong ratio of public investment to GDP?” said Gentiloni.

The commission has estimated that green investments will require an extra €520bn a year for the next decade — although admittedly the bulk of that will need to come from the private sector.

NextGenerationEU remains a one-off programme, Gentiloni said. However if it is a success, “you will have the basis to use these methodologies for other purposes and other goals”. If it’s not a success, he added drily, “we will have a problem”.

Macron hinted at similar ideas last week as he met Scholz in Paris, suggesting the EU should be willing to come up with innovative financing ideas — just as the union did when it hatched up the recovery fund in 2020.

There are other ways of achieving the goal of supporting investment, Gentiloni added, pointing to the current consultation over reforms of the EU’s Stability and Growth Pact. One change would be to reform these budget rules to incentivise “strategic investments” — something southern European countries have long advocated.

This concept of a so-called green golden rule, backed by the Bruegel think-tank among others, is viewed sceptically in fiscally conservative states such as the Netherlands.

In a letter sent to the Dutch parliament on Friday, finance minister Wopke Hoekstra pointed to commission staff working papers that have found that golden rules don’t necessarily incentivise public investment but instead add to overall complexity.

The Dutch letter favours simplification of the SGP and more rigorous enforcement — focused especially on countries with very high debts. One way of achieving that would be to prioritise public spending growth. The speed limit for this would depend on the country’s potential economic growth and level of debt.

Debt control, rather than deficit control, would become the primary objective of the budget rules, Hoekstra argues.

The letter points the way to tough battles ahead between frugal northern states and southern capitals, which will be seeking more accommodating fiscal rules as well as reruns of the NextGenerationEU experiment in joint debt issuance. Common ground will not be easy to find.

Supply chain disruptions wrought by the pandemic have led to several nations, including France, to seek “national economic resilience” and “reshoring” of critical manufactured goods — ranging from medicines to semiconductors and textiles. (More here)

“So I would love to say that [they are] going to meet and sort out all the world’s problems,” said one EU diplomat of today’s meeting of bloc foreign ministers. Their tongue was firmly in their cheek, but the best jokes are a little bit true, writes Henry Foy in Brussels.

Six weeks on from the first US intelligence reports shared with EU states, four weeks after Macron vowed to defend the country from attack and a week after the US called on Brussels to support robust sanctions against Moscow, the EU is still yet to decide on how to respond — beyond promising to do so.

There are multiple reasons for this. Some officials think that the bloc should be “cautious” about threatening Moscow with tough sanctions for fear of how the Kremlin could react. Some bemoan the EU’s need to find unanimity among 27 states. Others point to the reality that the EU’s big three member states are also the ones who stand to lose the most economically from tougher sanctions on Russia.

Oleksii Reznikov, Ukraine’s defence minister, yesterday criticised Berlin for vetoing Nato weapons shipments to Kyiv, telling the FT: “They are still building the Nord Stream 2 pipeline and at the same time blocking our defensive weapons. It is very unfair.”

At a meeting in Liverpool this weekend, G7 foreign ministers warned of “massive consequences and severe cost” if Russia increased its military aggression against Ukraine. The EU’s high representative for foreign affairs and security, Josep Borrell, in bilateral meetings with his British and US counterparts, discussed co-ordinated actions.

With US sanctions proposals already circulating, Brussels has some catching up to do. Three EU officials told Europe Express that the most likely course of action would be a broad discussion on sanctions at this week’s summit of EU leaders, with the expectation of them agreeing to instruct commission experts to draw up a list of specific measures.

But, as one senior EU official put it: “A deterrent is only as useful as you can credibly make it true.”

Scholz, Germany’s new chancellor and Morawiecki, his Polish counterpart, made an effort to find common ground when they faced the press yesterday after their first meeting, writes James Shotter in Warsaw.

The new German leader expressed hope for a “pragmatic solution” to Poland’s long-running feud with Brussels over the rule of law — which has held up the approval of Warsaw’s request for billions of euros in pandemic recovery funding.

While agreeing on topics such as Belarus’s orchestration of a migrant crisis on Poland’s eastern border, the two leaders also clearly disagreed in a number of other areas.

The most prominent remains the Nord Stream 2 pipeline project, which will ferry gas directly from Russia to Germany, and is fiercely opposed by Poland.

Morawiecki reiterated Poland’s concerns, warning that it would undermine Ukrainian and EU energy security. Scholz expressed his commitment to protecting Ukraine’s role as a transit route for Russian gas to Europe.

There was also disagreement over the future of the EU, and the two countries’ history. Asked about the German coalition agreement, which includes a reference to working towards a European federal state, Morawiecki said ideas of centralisation were “utopian”, and therefore “dangerous”, and stressed the importance of nation states.

Morawiecki said that they had also discussed the topic of compensation for the suffering Germany inflicted on Poland during the second world war. Germany regards the matter as legally settled — a position Scholz maintained yesterday.