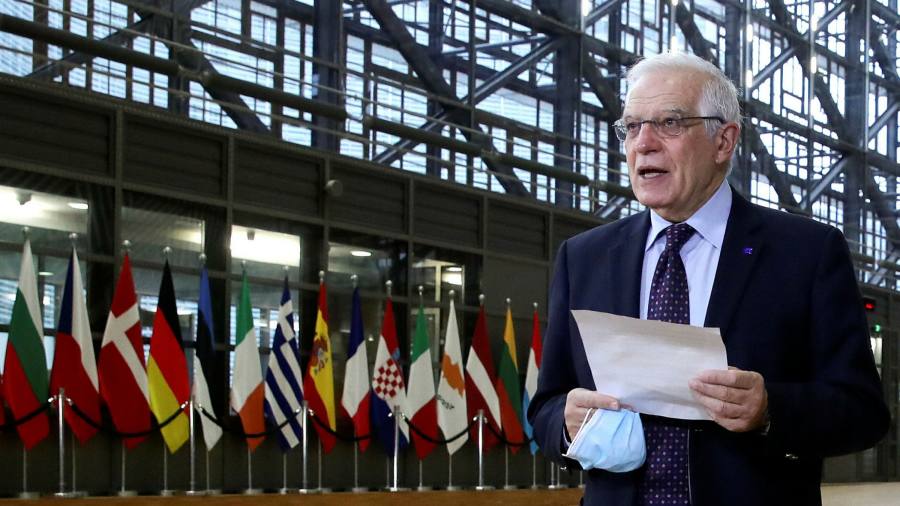 Happy New Year and welcome back to Europe Express.

France is now in the driving seat of the rotating EU presidency and its ambition for a more autonomous European security and defence policy is being tested in a flurry of meetings with Russia about Ukraine, where Washington (and to some extent Paris and Berlin) are upstaging the EU’s own diplomatic service. We’ll unpack the arguments EU foreign policy chief Josep Borrell made for the bloc not to be left out of upcoming Nato-Russia talks.

Meanwhile, on the pandemic front, the French government is extending its aid to businesses struggling with the new wave of restrictions imposed to halt the spread of the Omicron variant. Government inaction three months before the presidential election would have been easily seized upon by opponents, who are already criticising the latest restrictions on big rallies.

And in fresh Brexit statistics, we’ll look at why Europe is importing less and less food from the UK — while Britain is still going strong importing European wine.

No seat at the table

What a difference half a year makes. Last June, Brussels was aghast at a Franco-German proposal for the EU to sit down with Russian president Vladimir Putin. Now, Brussels is outraged that it has been snubbed in favour of the US and Nato, and has demanded to be given a chance to talk with the Kremlin next week about Ukraine, writes Henry Foy in Brussels.

Josep Borrell, head of the EU’s foreign and security arm, who has personal experience of what it feels like to be dismissed as a geopolitical lightweight by Moscow, has said that the EU “cannot be a neutral spectator” when European security is being discussed. The Kremlin would beg to differ.

As many EU officials privately admit to Europe Express, the bloc only has itself to blame for not being seen as a worthy defence and security sparring partner, given that it is riven by disagreements and division in precisely these areas.

Case in point: the EU-Nato declaration. With 21 countries members of both organisations, agreeing on a largely symbolic statement of co-operation that effectively reinstated those made in 2016 and 2018 was supposed to be a simple task.

But despite a majority of member states calling on EU Council president Charles Michel to make short work of a draft submitted in September by Nato, it has been delayed into this year.

That, by accident or — more likely — design, brings the debate over its contents under the French EU presidency, and the Elysée’s belief that the EU needs more “strategic autonomy” and defence capabilities independent of the US-led military alliance.

Speaking of France, while Borrell calls for a united EU voice to speak with Russia, Paris and Berlin are instead sending envoys to talk to Moscow privately. That will please the Kremlin, which, of course, prefers talking to individual countries anyway as it is easier to work out where their geopolitical and business interests align.

Eastern EU states, who are members of Nato precisely because they fear Russia and are wary of their western colleagues going soft on Moscow, will get their time across the table with the Russians next Wednesday, when the Moscow delegation sits down for a summit with the alliance.

But the Russians will come to Brussels for the Nato headquarters, not the EU’s. Despite Borrell’s chagrin, the EU will need to accept its role as a neutral spectator — and readouts from the meetings after they conclude.

For all the dreams of “strategic autonomy” and Michel’s proclamation that 2022 will be the “year of European defence”, when Moscow needs to talk power politics, it knows who to call.

France is extending fresh financial help to small companies struggling because of new health measures and easing repayment conditions on state-backed loans as it tries to keep an economic recovery on track despite a surge in Covid-19 infections, writes Sarah White in Paris.

Like many European peers, France avoided mass defaults throughout the pandemic and shielded businesses such as restaurants that had to close for months on end thanks to a vast aid package that included furlough schemes, government-guaranteed loans and help with welfare bills and rental costs.

As a fifth Covid wave picks up, with a spike in infections led by the highly transmissible Omicron variant, France has so far shunned any form of full lockdown and is banking on stepping up a vaccination booster shot campaign.

But new restrictions, including a ban on events of over 2,000 people, are set to hit the entertainment industry. Nightclubs are closed and bars and restaurants may struggle as people are told to revert to working from home and cut back on socialising.

Economy minister Bruno Le Maire said companies under pressure in sectors such as tourism or hospitality could apply for aid to cover their fixed costs if their revenues halve in January. The government will also allow some businesses to renegotiate their state-backed loans, with those due to start repaying them from March able to apply for a six-month delay.

“We’re not reactivating the ‘whatever it takes’ mode,” Le Maire told RTL radio yesterday, referring to the broader aid packages put in place in 2020.

Some 25,000 to 30,000 small companies out of a total of nearly 700,000 that have taken out state-backed loans via their banks could struggle with immediate repayment, Le Maire said.

France’s banking federation said the financial sector was in talks with the government over how to articulate the loan extensions, which it said could be envisaged on a case-by-case basis for struggling companies. It said more than half the businesses that had taken out state-guaranteed loans had begun to repay them already.

Poland’s annual inflation hit 7.8 per cent in November, the highest level for two decades, and the fourth highest in the EU. This development poses a problem for the country’s ruling Law and Justice party (PiS), which has so far remained popular thanks to a large extent to its success in improving the lot of less well-off Poles. (More here)

Agri-food imports from the UK to the EU declined by almost €3bn, or 27 per cent, in the first nine months of 2021 from a year earlier, after new post-Brexit trade rules came into effect, according to European Commission data.

The decline in trade came even as exports from the EU to the UK rose slightly, by 0.5 per cent, with particularly strong rises for wine and live animals, writes Judith Evans in London.

The import drop came after new post-Brexit regulations took effect from January 2021, imposing new veterinary and customs checks on goods sent from the UK to the EU, even as the UK delayed the full implementation of the new rules on goods travelling in the opposite direction until 2022.

The decline was particularly steep for tropical fruits, nuts and spices, where imports fell by 88 per cent, or €217m — a drop that Dominic Goudie, head of international trade at the UK’s Food and Drink Federation, said probably reflected new rules of origin. These impose tariffs on imports to the EU where foodstuffs originate elsewhere and have not been significantly processed in the UK.

This shift has prompted some multinationals to reorganise supplies, he said.

“Some businesses have reorientated their supply chains — if they are supplying to their own factories or customers in the EU, they will trade directly into the EU instead of coming via the UK,” Goudie said.

Trade has rebounded somewhat from the early months of 2021, when some companies had stockpiled in advance of the new Brexit rules, and others — especially those importing and exporting animal products — fell foul of delays and paperwork mistakes at the border. But imports from the UK in September 2021 were still 25 per cent below a year earlier, the commission said.

Goudie said data on the final quarter of 2021 would help to show whether UK exporters will make up some of that lost ground. New sanitary and phytosanitary requirements on agri-food products moving from the EU to the UK from July will meanwhile present a fresh challenge for EU exporters, he added.

These stocks went seriously low back in December . . . so people are getting away from that extreme negativity