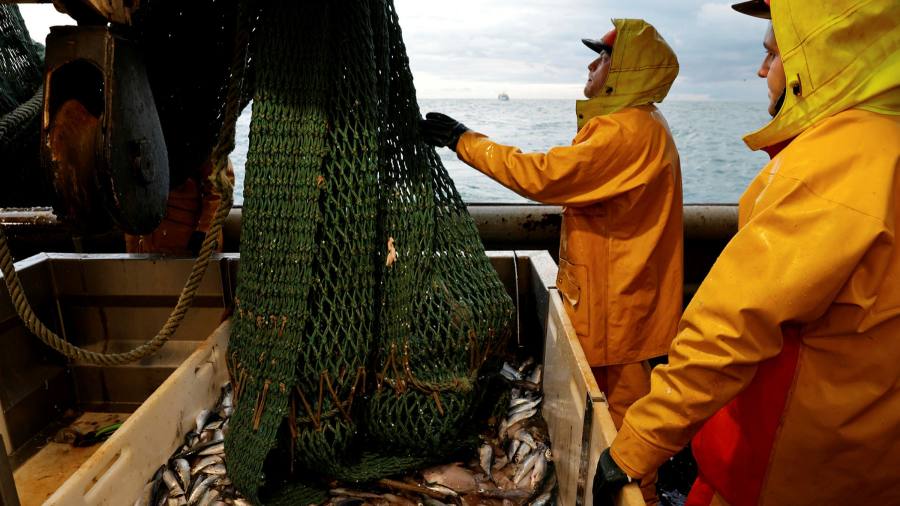 Brussels was engaged in last-ditch talks on Monday to try to defuse an escalating dispute between the UK and France over post-Brexit fishing rights, prompting Emmanuel Macron, the French president, to suspend a threatened round of sanctions against the UK while the negotiations continue.

Paris had vowed to block UK fishing boats from landing their catches at French ports and to increase checks on UK imports to France from midnight on Monday if Boris Johnson’s government did not grant more licences to French boats. But Macron said hours before the deadline that he would delay the measures to “give a chance” for the talks due to continue on Tuesday.

“You don’t impose sanctions while negotiations are continuing,” he said on the sidelines of the COP26 climate summit in Glasgow. “The coming hours are important . . . I understand the British are going to come to us with other proposals.”

Tensions over fishing rights have been simmering for months after the UK failed to issue permits for some small French boats to fish in British waters, a key element of the EU-UK trade deal.

Paris has accused the UK of issuing only half the fishing licences France is entitled to under the agreement. London argues that it has issued permits to 1,673 EU vessels to fish in its exclusive economic zone since December 31 last year, which it says is 98 per cent of EU applications. France insists that 90 per cent have been granted, and the outstanding 10 per cent are mainly for French boats.

The British insist they have refused to issue licences only to boats that have failed to prove they had fished in UK waters before Brexit, while the French argue that London is deliberately dragging out the process and targeting fishing boats from France.

Macron conversed with Johnson at the climate summit on Monday and said he was confident that the UK prime minister would take French proposals seriously so that the talks could succeed. “For 10 months the results have been too slow, and if this new method allows the system to work, we should give it a chance.”

The European Commission announced on Monday that a video meeting would be “convened by the commission . . . bringing together senior officials from the commission, France, the UK, as well as from [the Channel islands of] Jersey and Guernsey, to allow for a swift solution on the outstanding issues”.

While Paris wants more licences for its fishing boats, British officials insisted the meeting was unlikely to resolve the dispute unless the French side presented new evidence on historic fishing activity.

Liz Truss, UK foreign secretary, on Monday warned that Britain would not “roll over” to “completely unreasonable threats” and was prepared to take legal action against France. Downing Street said it had “robust contingency plans in place” should France carry out its threats. “We continue to hope that they step away from the threats they have made”, a spokesperson said.

EU diplomats welcomed the commission’s involvement in the dispute. One diplomat said Brussels’ decision to resolve the conflict is a “good step and [I] hope we can find a solution”.

A UK government spokesperson welcomed Paris’s announcement that they would not go ahead with Tuesday’s proposed measures.

“As we have said consistently, we are ready to continue intensive discussions on fisheries, including considering any new evidence to support the remaining licence applications,” they said.

“We welcome France’s acknowledgment that in-depth discussions are needed to resolve the range of difficulties in the UK-EU relationship. Lord Frost has accepted Clément Beaune’s invitation and looks forward to the discussions in Paris on Thursday.”

The dispute over post-Brexit fishing licences is part of a wider set of grievances that have pitted Johnson against Macron.

The French president is furious that Britain is trying to renegotiate the Northern Ireland protocol, part of the UK’s withdrawal deal with the EU. The issue of migrants crossing the English Channel is another running sore.

EU-UK talks on improving the operation of the Northern Ireland protocol continue this week, with the principal negotiators from both sides ratcheting up the rhetoric.

“I am increasingly concerned that the UK government will refuse to engage with this and embark on a path of confrontation,” Maros Sefcovic, commission vice-president in charge of the negotiations for the bloc, wrote in the Daily Telegraph.

Officials in Brussels think it is now inevitable that Johnson will activate the Article 16 “override” mechanism in the protocol once the COP26 climate summit is over in Glasgow, pushing both sides further towards a trade war.

Frost, writing a foreword to a Policy Exchange paper on the protocol, claimed the Johnson administration had signed the deal with the EU from a position of “extreme weakness”.

“The insistence of the EU on treating these arrangements as like any other part of its customs and single market rules, without regard to the huge political, economic and identity sensitivities involved, has destroyed cross-community consent well before the four-year mark,” he wrote.