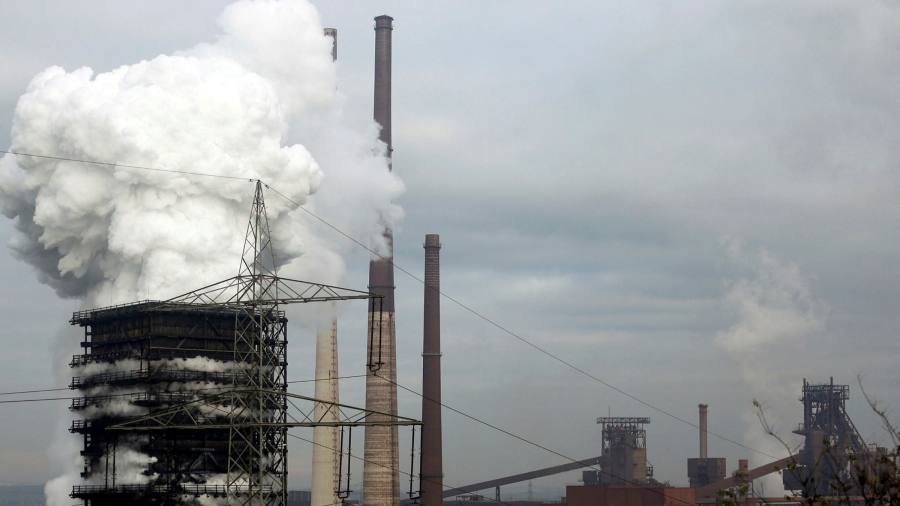 French president Emmanuel Macron is receiving the entire team of EU commissioners in Paris tonight, as is customary at the start of the rotating six-month EU presidency. One of his priorities, advancing negotiations on a carbon tax on imports from countries where industries do not have to green their technologies, is already making waves in the European parliament. We will unpack the arguments and why governments are likely to strike back.

Meanwhile in Germany, an agreement was reached to support the re-election of President Frank-Walter Steinmeier, who we will profile today.

And in Baltic news, the Lithuanian government is determined to maintain its hawkish stance on China, despite criticism from the country’s president.

This year will be crucial for the EU’s attempts to export its environmental policies to the rest of the world (see: the taxonomy), writes Andy Bounds in Brussels.

One of the blockbuster policies to be negotiated in the coming months is the EU’s carbon border adjustment mechanism — a tool that will force foreign importers to pay a CO2 price equivalent to EU businesses. It is designed to prevent polluters from simply decamping to less onerous jurisdictions to avoid paying the price for carbon.

The European parliament’s environment committee wants the CBAM, due to come into force from 2026, to be introduced sooner and on a wider range of imports. Dutch Labour MEP Mohammed Chahim outlined his draft report yesterday.

One of the most contentious parts of the CBAM is how quickly to phase out free carbon credits awarded to EU industries that pay Europe’s domestic CO2 price. The introduction of the CBAM is meant to help level the playing field between EU and non-EU producers of electricity, steel, cement, iron and fertiliser, thus removing the logic for free allowances.

The European Commission’s draft text, published last summer, proposed a gradual phaseout from 2026 onwards, with 2036 the year in which all free credits are removed.

In his report, Chahim sought to shorten this phaseout to allow the CBAM to kick in earlier. European industries such as steel are big beneficiaries of free carbon credits, whose price reflects the now-record cost of CO2, which hit €90 a tonne last month.

Chahim wants the phaseout to start in 2025 and be entirely eliminated at the end of 2028. “Free allowances have had their uses in the past but with the introduction of CBAM, we have an alternative carbon leakage measure,” Chahim told Europe Express.

EU governments wary of the merits of the CBAM will push for longer timelines to protect industries from the soaring cost of polluting, with steelmakers already intensifying lobbying. Member states will have to agree on their position before final negotiations with MEPs this year.

Back in the saddle

With all the main parties in the Bundestag now backing his bid for a second term, Frank-Walter Steinmeier is on course to be re-elected German president next month in another victory for the Social Democrats, writes Guy Chazan in Berlin.

Once written off as a spent force, the SPD is riding high. Germany’s chancellor, president and speaker of parliament all hail from a party that earlier last year was polling at just 14 per cent and seemed to have forfeited all claim to the status of volkspartei.

Steinmeier himself is an SPD institution, a man who has figured prominently in national politics for more than two decades and shaped many of the policy debates that have defined modern Germany.

Critical to his rise was his close relationship with Gerhard Schröder, dating from his time as prime minister of Lower Saxony in the 1990s. Not long after Schröder unseated Helmut Kohl as chancellor in 1998, he appointed Steinmeier his chief of staff.

In that role, Steinmeier was instrumental in formulating “Agenda 2010”, the programme of far-reaching reforms that overhauled Germany’s labour market and welfare system. The measures helped reduce unemployment and increase competitiveness, but also alienated millions of SPD voters.

In 2005, Steinmeier was appointed foreign minister in Angela Merkel’s first government, a “grand coalition” between her centre-right CDU/CSU and the SPD. He held the post until 2009, when Merkel formed a different coalition with the liberal FDP. That year, he headed up the SPD parliamentary group, effectively making him leader of the opposition.

In 2013, he reassumed the job of foreign minister in another grand coalition, and it was in this role that he came to personify German diplomacy during the 2014 Ukraine crisis, when he and Merkel deployed a combination of economic sanctions against Moscow and tireless negotiations to prevent an all-out war in the region.

In 2017, Steinmeier was elected the country’s 12th president. It is largely a ceremonial role, but he made a splash by intervening in the political impasse that year created by the breakdown of coalition negotiations. He was instrumental in persuading the SPD to overcome its resistance to joining the CDU/CSU-led government, paving the way for yet another grand coalition — Merkel’s third.

Steinmeier was born in 1956 in the west German town of Detmold, the son of a carpenter and a factory worker who had been driven from her home in modern-day Poland after the second world war.

As president, he has won recognition for well-calibrated speeches that emphasised Germany’s moral responsibility for the Holocaust and denounced racism, rightwing extremism and anti-Semitism.

By supporting ceremonies to commemorate Covid-19 victims, he has also emerged as an advocate of social cohesion during a pandemic that has left German society polarised and embittered.

Post-Brexit trade arrangements are set to feature prominently in Northern Ireland’s elections in May. The customs checks in the Irish Sea, which have caused problems for trade between Britain and Northern Ireland, have also led to a boom in trade with the Republic of Ireland. (More here)

Lithuania’s support for Taiwan has sparked huge anger from China, and this week brought about the first cracks in the united front of Lithuanian policymakers, writes Richard Milne, Nordic and Baltic correspondent.

But it also prompted Taiwan to reward Vilnius with a $200m investment fund, with the first money expected to flow later this year. (More here)

Lithuania’s president Gitanas Nauseda told local radio on Tuesday that it had been a “mistake” to name the representative office as Taiwan and not the less controversial Taipei, as many other European countries have done.

But the Lithuanian government is not backing down.

Radvile Morkunaite-Mikuleniene, vice-chair of the parliament and deputy head of the ruling party, told Europe Express that Lithuania was a “parliamentary republic”, with policy shaped by the government.

“One thing is very clear: we do not step back from our decision. We definitely don’t call it some kind of error. This is his personal stance,” she said of Nauseda’s comments.

The spat between the president and the government — coming after a similar squabble over Covid-19 policy — is deeply unfortunate for Lithuania, as it struggles to keep the international community on its side, not just over China but also over Belarus and Russia.

China’s “very aggressive reaction”, in Morkunaite-Mikuleniene’s words, has included not just blocking imports from Lithuania but also trying to stop foreign manufacturers such as Germany’s Continental from using components made in the Baltic country. The Taiwanese investment fund is being set up to counter some of those actions.

Lithuania’s government declined to comment, but officials are privately dismayed over how the internal dispute is viewed internationally, especially after revelations that all three Baltic countries have hit record trade levels with Belarus even as they push for extra sanctions against Alexander Lukashenko’s regime.

Morkunaite-Mikuleniene said it was important to stick to the defence of democratic values and not “bend ourselves in front of countries that are breaching international agreements”.

“Sometimes there is a feeling that you are climbing a steep hill, and after you reach the top there will be an easy walk but suddenly you see new obstacles that are in front . . . I hope we will stay firm. The most important is not to get scared.”

I am not here to piss off the French . . . But the unvaccinated, I really want to piss them off