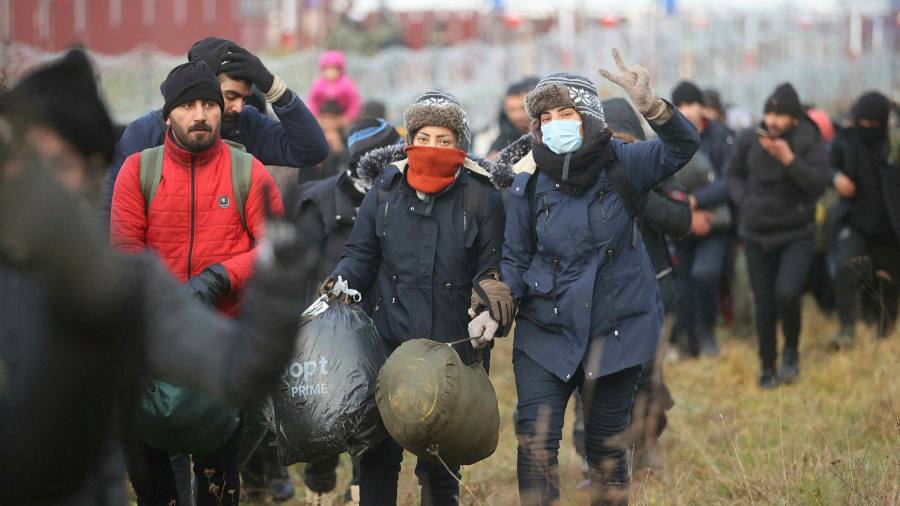 The EU is considering imposing sweeping sanctions on scores of Belarusian officials, a Syrian airline and a hotel in Minsk as part of measures to press authoritarian leader Alexander Lukashenko to stop the flow of migrants to Europe’s borders.

EU diplomats told the Financial Times that the bloc was working on drawing up a wide-ranging list of people and entities involved in facilitating the movement of people from regions such as Syria, Yemen and Iraq to the EU-Belarus border, in a move that Brussels has called a “hybrid attack” from the Lukashenko regime.

The draft list includes Syrian airline Cham Wings for running flights to Belarus and the Hotel Minsk for housing migrants in the country, diplomats said. The list also includes more than two dozen Belarusian officials and could extend to Minsk airport.

Thousands of people have travelled from the Middle East via Minsk to Belarus’s borders with Poland, Lithuania and Latvia in recent months in the hope of entering the EU. European officials say the surge is being orchestrated by Minsk in retaliation for the bloc’s support for the Belarusian opposition.

EU foreign affairs ministers will discuss the scope of fresh sanctions at a meeting in Brussels on Monday, where they are expected to approve a new legal basis for a fifth sanctions package against Minsk. Diplomats said the final list of people and entities would take weeks to finalise as the EU co-ordinates the measures with the UK, Canada, and the US.

Lukashenko warned on Thursday that his country could retaliate against any “unacceptable” sanctions by cutting deliveries of gas or goods to Europe. Russia supplies about 40 per cent of the EU’s gas, with about a fifth transiting through Belarus.

According to data from FlightRadar, Cham Wings has run four flights from Damascus to Minsk since November 7. On Friday, Turkey’s Civil Aviation Authority said it had banned citizens of Iraq, Syria and Yemen from buying tickets from Turkish airports to Belarus until further notice.

Brussels has been lobbying countries used as transit points on the route to Minsk to help stop the flow of people, which has left thousands stranded in freezing conditions between Belarusian and Polish forces on the bloc’s eastern border.

“When applied, these measures will have a tangible impact on the current situation,” said a senior EU official ahead of the official announcement. “We continue our outreach to countries of origin and transit. Other contacts are planned over the next days.”

Istanbul has become an important travel hub connecting Europe with the Middle East and Africa as Turkish Airlines has dramatically increased its international footprint in recent years.

Turkey’s national flag carrier enacted its own ban on passengers from Syria, Iraq and Yemen on Thursday night, according to a person familiar with the matter. The airline also reduced the number of weekly flights from 14 to 10, the person added.

Margaritis Schinas, vice-president of the European Commission, on Friday visited Beirut, capital of Lebanon, as part of a wider tour of the region aimed at persuading countries to help stem the number of migrants. He is due to travel to Iraq next.

The Kremlin said on Friday that Lukashenko had not consulted Moscow before threatening to limit gas supplies, and that Russia was a reliable supplier. However, in a show of strength, Russia also deployed paratroopers for an exercise near Belarus’s western border.

Poland’s defence minister said on Friday that Polish forces would receive support from British military engineers in securing the fence on the border with Belarus. He did not specify how many British personnel were involved.

Ankara, which has a close but complex relationship with Moscow, had reacted angrily to claims from Poland in recent days that Turkey was acting in a “synchronised” fashion with Russia and Belarus to stoke the crisis.

The country’s foreign ministry said it rejected efforts to “portray it as part of the problem”.

Turkey is host to almost 4m refugees, the vast majority of whom are Syrian but also a sizeable number of Afghans.