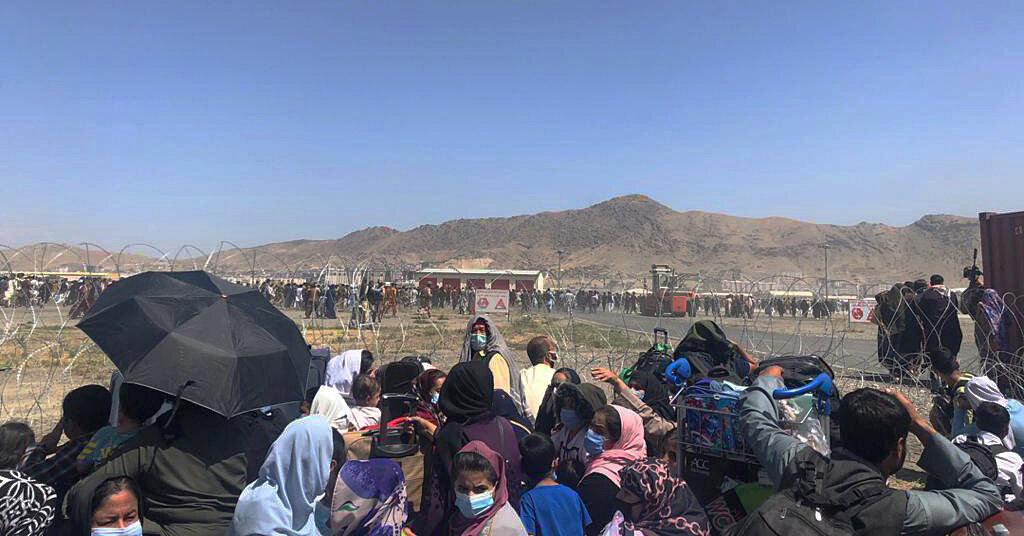 At first light the next morning, Mujib nervously left the home of his parents, who had decided to stay in Kabul, to join the rest of the team at the airport. He took with him the only food he could find — 40 loaves of bread from the one bakery in the neighborhood that had opened.

As crowds began streaming into the airport, Mujib slipped in among them. Some carried a change of clothes folded into shawls, others carried backpacks. One little girl simply carried a pair of shoes.

Mujib found the Times families, but the group had grown. That morning, our group was joined by more than 100 others from other Western news outlets, looking for help and direction.

All morning, Mujib and his colleagues tried to negotiate with the Marines to let the group cross to the military side of the airport, where planes were still able to land and take off. But in the growing chaos our unwieldy band managed only to move from the airport parking lot, which was no longer safe, to the base of a tower guarded by the Marines on the edge of the runway. There, our group waited in the scorching sun.

Times officials in New York were on the phone with top officials in Washington, who said they would help get our group to the military side of the airport. And T.M., from a run-down room in a bunkhouse in Qatar, was in contact with the Army and Marines at the Kabul airport, who assured him they would do what they could.

But their assurances could not change the reality at the gate — even putting senior military leaders from U.S. Central Command on the line with the Marines at the airport wasn’t helping. The only people the Marines would wave through to the military side were people with Western passports.

One young Afghan woman, in tears, begged the Marines to let her cross.

“What passport do you have?” a Marine asked. She opened her passport to show a visa to the United States.

“I was supposed to fly for my studies, but now there are no flights,” she said.

“But your passport says The Islamic Republic of Afghanistan,” the Marine said, smacking the document’s cover.

Crouched on the ground near the tower where the Marines kept guard, the children in our group were fading from dehydration, and panic was etched in the faces of their parents.

The Marines would not let us in, but some tried to help. One exhausted Marine dragged himself to the control tower’s slim shade. When asked for water, he walked back to talk to one of his commanders, but the man just threw up his arms. The young Marine kept walking, and 10 minutes later quietly reappeared with eight bottles of water.

“Pretend this didn’t come from me,” he said, and walked away.

For almost the entire afternoon, the runway was flooded with waves of people hoping to reach the military side of the airport. Helicopters thundered overhead, and occasional gunfire rang out from the ground as American Marines and Turkish soldiers tried to control the crowd. But as the hours passed, the crowds stopped fearing the bullets, knowing that the soldiers would not shoot directly at them.

When the crowd saw that there were no flights, people started going wild, seizing any piece of the airport they could grab — mattresses, buckets, even empty water bottles.

Our group tried to hold on to a corner of the airfield, building a makeshift boundary around us from rolls of barbed wire, even as we worked to be moved to the secure side of the airport. We knew spending a second night at the airport would be dangerous, not just because we lacked water and food, but also because the mob had run out of things to loot. A few men lingered, eyeing our group as we tried to keep together.

The main avenue of communication was a WhatsApp group, with Mujib exchanging quick voice or text messages with U.S. military and civilian officials at the airport, with Times leaders across the world, and with T.M. in Qatar.

Mujib became increasingly certain that if we couldn’t make it to the military side by 5 p.m., everyone would have to disperse to find food, water and protection at home. The children were getting too weak. The Marines suggested that we try to cut through the crowd and walk to their side in a single file, which was impossible — we would be rushed by thousands.

As we waited for some operation that might clear part of the crowd, the Taliban made our choice easier, in a way: They came to clear everyone away, including us. This was the first time many of our people had come face to face with the Taliban. It was chaos and crying as the fighters fired into the air and started beating people to get them moving.

“We are moving toward the Marines,” Mujib wrote, warning the Marines and Times leaders on the joint WhatsApp group as the gunfire continued and the Taliban kept throwing everything they had at the crowd. “We have no other choice.”

We reached the edge of the crowd, trying to keep our group together — and trying our best to keep others away. We were about 400 yards away from the column of Marines who could usher us to the military side. But we were engulfed by people who would rush right along with us if we moved.

So we devised another plan: We all sat in a circle, and moved two little girls who were dressed in bright red to the front of our group. They were the only visual way to quickly distinguish our group from thousands of others. The Marines said they would begin an operation to push back the crowd on each side of us, and we would move forward through the opening.

And then, just as we were trying to figure out whether to try to push our way through, the Taliban cut right into the middle of our line.

The fighters started pushing, swinging clubs and rifle butts into us. Automatic weapon fire hammered out right beside us as the Taliban began firing into the air. The crowd erupted into random motion.

Our colleagues fell to the ground, family members and children were trampled, screaming in terror and pain. One of our longtime bureau drivers, Farid Rahimi, went down with a broken arm as he tried to help keep the stampede away. Even some of the children bore deep bruises.

“It’s a mass stampede — we are leaving, we are leaving,” Mujib told the WhatsApp group in an audio message, his voice hoarse with thirst and exhaustion. “We got beaten by the Taliban — they came in the middle and they started beating everyone.”

FATIMA FAIZI, TIMES REPORTERThe Taliban just came out of nowhere, it felt like. My mom had bruises on her back, and my sister was beat up. And the fighters were just shooting everywhere. In that moment, I could see it so clearly, what it would look like when they shot me, shot my family.

Our escape from the airport was almost as hazardous as being there: As thousands of people were being driven out, thousands of others were packed outside at the roundabout trying to push their way in.

In the chaos of the two crowds pushing against each other, almost all of our suitcases were lost — bags packed with critical belongings for people who were fleeing their homes and country.

As family members began finding each other and trying to make it home, a cry of alarm went out over the group chat: Abdul Salim and Hafiza Samadi’s teenage sons were still missing.

“Please! Please!” Abdul Salim, a longtime staff member, said in a voice note. “I don’t know what to do. Can anyone help?”

Frantic calls to Taliban checkpoint guards yielded nothing — the crowds were too big, and lights were out in the neighborhoods around the airport. Hours passed, and Hafiza, the boys’ mother, became convinced they had been shot.

But they had not been. Separated from their family and each other, each boy found a way to straggle home on his own. The oldest, Seyar, 17, made it to a school where the watchman knew his father. A cousin was eventually able to bring him home. Sohail, 14, had a harder time. After being chased away by the Taliban, he searched for a long time before finding a white-bearded taxi driver who was willing to take him home without paying up front.

For a few hours, we also feared that one of our reporters, Najim Rahim, had been detained by the Taliban in the airport chaos, but in fact he had fought them off and been taken by the Marines to the secure side of the airport.

We had made it out of the airport alive. But the airport had become close to impossible to get into directly.

The next morning, T.M. boarded a U.S. military transport plane in Qatar and flew back to the Kabul airport. We needed someone there on the military side dealing directly with American forces. Another Times correspondent, Christina Goldbaum, stayed behind in Qatar to help in coordinating with officials there and making temporary housing arrangements for the Afghan families.

T.M.I had to get back. We had left too soon, and left our people and Mujib behind to face the crowds and the Taliban on the tarmac on Monday. We couldn’t do it that way again, and I came back to the military side of the airport as a liaison, trying to find help for our families from machinery that was already running at 130 percent in an effort to get thousands of foreigners, diplomats and service members out of the country in a hurry.