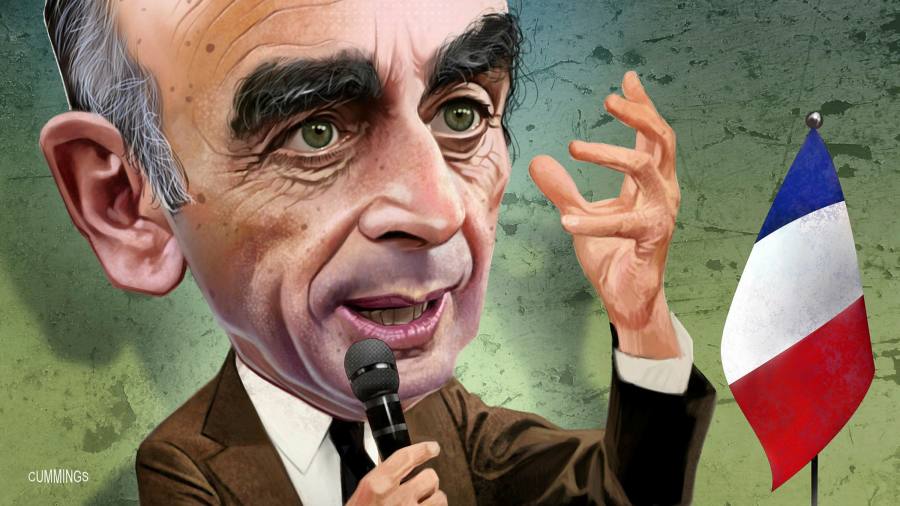 Eric Zemmour knows how to get himself noticed: the extreme-right French presidential hopeful, whose insurgent tactics and ability to stir outrage have been likened to those of Donald Trump, has electrified a campaign season that had looked set to culminate in a repeat of the 2017 showdown between Emmanuel Macron, now the incumbent, and far-right leader Marine Le Pen.

The latest attention-grabbing move by Zemmour, who has been on trial in Paris this week for hate speech, was to visit the Bataclan concert hall last Saturday night, on the sixth anniversary of the Islamist terror attacks that killed 130 in Paris. Instead of simply paying his respects in silence like other politicians at the site, he publicly blamed the killings on immigration — the issue that he has relentlessly pushed to the front of the political agenda in France ahead of the April election.

Zemmour — a vulpine 63-year-old television talk show polemicist, who in recent weeks overtook Le Pen to reach number two in the opinion polls behind Macron — said that then president François Hollande “knew that terrorists were infiltrated among migrants [coming into Europe] . . . and he made the absolutely criminal decision to keep the borders open”.

Opprobrium rained down almost immediately not only from victims’ groups and Hollande himself, but also from Le Pen. “Eric Zemmour’s problem is that he is a polemicist and he does not know how to do anything but create polemics,” said Le Pen.

Zemmour, however, won two full days of news coverage out of the episode. Boosted by CNews — the TV channel backed by rightwing tycoon Vincent Bolloré where he was the star commentator — he was already creating more buzz in the form of Google searches and social media commentary than his rivals, despite having yet to officially declare his campaign.

His extraordinary rise since he emerged as a putative candidate in the summer is down to a Trumpian genius for picking simple themes that resonate with voters and an equally Trumpian insistence that the country is going to the dogs, all with an intellectual flavour and a smattering of history to appeal to the French middle class.

While Trump wanted to “build the wall” to keep out immigrants from Latin America, Zemmour has suggested banning foreign first names such as Mohammed and Kevin. And while Trump wanted to “make America great again”, Zemmour warns of the decline of a Judeo-Christian nation under assault from immigration, feminism and liberalism; one of his books is called The Suicide of France.

“He touches a pretty deep anguish,” says François-Xavier Bellamy, a member of the European Parliament for the conservative Les Républicains party. “It’s a pessimistic vision, declinist if you will, but not unfounded.”

In a country with the largest populations in western Europe of both Muslims and Jews, Zemmour’s inflammatory language and his talent for setting the agenda are regarded as extremely dangerous on the left and in the centre of French politics — particularly since he has won the support of supposedly centre-right voters long wary of Le Pen.

“All the candidates of the right are becoming more extreme, are Zemmour-ising themselves,” says Virginie Martin, politics professor at Kedge Business School in Paris.

Julian Jackson, biographer of Charles de Gaulle, says Zemmour’s peculiar defence of Philippe Pétain’s wartime Vichy government — he has controversially claimed that the regime protected French Jews at the expense of foreigners — is “very, very dangerous” because he says that Zemmour, who is himself Jewish, is trying to justify discrimination if it fall shorts of extermination.

“In the 1930s, people talked of Jews the way Zemmour talks of Muslims today,” says Jackson.

Zemmour thrives on such controversy. Only this week, the Royal Institution in London, citing a “process of due diligence”, cancelled an event at which Zemmour was due to speak on Friday as part of his campaign to win support from the many French voters living in the UK.

He has repeatedly run foul of France’s strict laws against inciting racial or religious hatred and denying the Holocaust, and been accused in 16 such legal cases over the years, according to his lawyer. But he has prevailed in most of them, often using a free speech defence, and he argues that he is being targeted for politically incorrect views.

On Wednesday, although not present in court, he went on trial for “inciting hatred” for particularly virulent comments he made on CNews last year about immigrant minors as “thieves”, “murderers” and “rapists” whom France should “send back”.

Faced with a possible fine of €10,000 if convicted, Zemmour put out a statement to say he would not be silenced: “I will not attend this trial because I refuse that political debate take place in courtrooms. The prosecutor and the antiracist groups think they can intimidate and discourage me. They are only reinforcing my determination.”

It was vintage Zemmour from a newcomer to electoral politics so outrageous he has succeeded in making Le Pen and her Rassemblement National party seem almost moderate. “He thinks civil war has started,” said the RN’s Jordan Bardella, accusing Zemmour of dragging French nationalists back to the era of Pétain. “I don’t think it has, and must be avoided.”