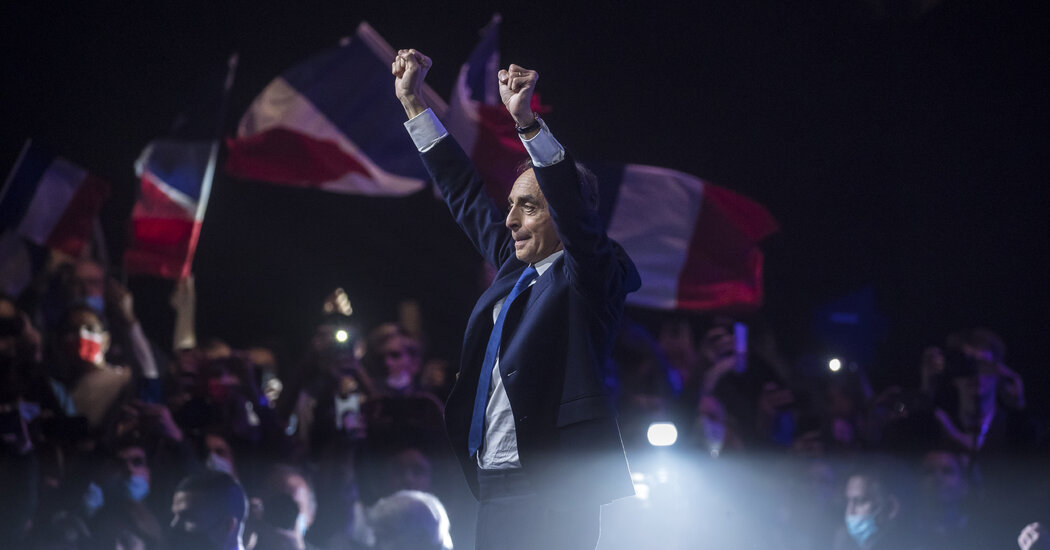 VILLEPINTE, France — The speech, riddled with attacks on the news media, elites and immigrants, with a fiery orator whipping up thousands of flag-waving supporters, was reminiscent of a Donald J. Trump campaign stop from years past.

But the scene was in France, last weekend, where Éric Zemmour, the polarizing far-right polemicist who has scrambled French politics, launched his presidential campaign with a rally in front of thousands of ardent supporters.

“On est chez nous!” — “This is our home!” — they chanted in a cavernous convention center filled with spotlights, speakers and giant screens in Villepinte, a suburb northeast of Paris.

At one point during the rally, antiracism activists were attacked in the sort of brawl rarely seen at French political events. Earlier in the day, fans booed a television news crew, forcing it to be temporarily evacuated, and several journalists reported being insulted and beaten.

The outcome of Mr. Zemmour’s campaign remains unclear four months ahead of France’s presidential election, with President Emmanuel Macron still ahead in the polls, and fierce competition emerging from the right. But the rally offered a glimpse of where the election could head, and which Trumpian tones it could take.

Unlike Marine Le Pen, the candidate of the traditional far right, who has long sought success by softening her party’s far-right views, Mr. Zemmour has bet that a full-on promotion of his reactionary ideas can fuel his rise.

He has done so by mastering the codes of social and news media, and by appealing to a somewhat wealthier and more educated base than the traditional far right. Recent polls suggest this approach has worked; about 15 percent of French voters say they intend to vote for him in the first round of voting.

“He’s the one who breaks a dam,” said Vincent Martigny, a professor of political science at the University of Nice. Voters who once balked at supporting Ms. Le Pen have now embraced his more extremist ideas, he said.

But this quest to stake out a position on the extreme right may also backfire, as shown at Sunday’s rally, when dozens of his supporters attacked antiracism activists. The violent brawl could stain his image and undermine his attempts to broaden his electoral base, according to political analysts.

Still, as with Mr. Trump, no scandal to date has done any lasting damage to Mr. Zemmour’s political ambitions as he taps into widespread fears that French identity is being whittled away by immigration. Those fears have been heightened by a number of terrorist attacks in recent years, some committed by the children of immigrants.

The crowd, of about 12,000 people that gathered in the Villepinte convention center, reflected some of the forces that have fueled the candidate’s meteoric rise — upper middle-class voters and some segments of an educated, affluent youth.

“Zemmour is someone who can actually make our ideas triumph and save France,” said Marc Perreti, a 19-year-old student from Neuilly-sur-Seine, a wealthy suburb of Paris.

There was widespread nodding at the rally when Mr. Zemmour talked of France’s “great downgrading, with the impoverishment of the French, the decline of our power and the collapse of our school.” And there were loud cheers when he mentioned “the great replacement, with the Islamization of France, mass immigration and constant insecurity.”

The so-called great replacement, a contentious theory that claims the West’s population is being replaced by immigrants, has been cited by white supremacists in mass shootings in Christchurch, New Zealand, and El Paso, Tex.

But Sophie Michel, a former history teacher and a mother of nine, said she believed the theory, pointing to the growing number of immigrant families living in her apartment building in western Paris.

“We’re the last white people there,” she said, “this is for real.”

The name of Mr. Zemmour’s new party, “Reconquest,” evokes the centuries-long period known as the Reconquista, when Christian forces drove Muslim rulers from the Iberian Peninsula.

Two of Ms. Michel’s children also attended the rally, along with hundreds of young people. Hortense Bergerault, 17, said she followed Mr. Zemmour on Instagram, where he has nearly 150,000 followers, ranking only behind Mr. Macron and Ms. Le Pen among the presidential candidates. “I have many friends who are really into it,” she said.

Mr. Martigny, the political scientist, said that Mr. Zemmour was the product of “culture wars” that had gradually spread far-right ideas across society, especially through Fox-style news networks, clearing “a space for a Trumpian player in the French political life.”

“They have understood that there is no lasting political victory without a prior cultural victory,” Mr. Martigny said of Mr. Zemmour’s team.

This cultural win was evident in Villepinte, where many supporters referred to Mr. Zemmour’s books and TV appearances as eye-opening experiences. Some wore baseball caps reading “Ben voyons!” — a rejoinder that Mr. Zemmour often uses to dismiss criticism, and which roughly translates to “Oh, come on!” The crowd even chanted the phrase when Mr. Zemmour, speaking from his lectern, mocked those accusing him of being a fascist.

Antoine Diers, a spokesman for Mr. Zemmour’s campaign, said that although France and the United States were two different countries, they had “obviously” looked at Mr. Trump’s 2016 presidential run “because it was a success.”

Raphaël Llorca, a French communication expert and member of the Fondation Jean-Jaurès research institute, said Mr. Zemmour had successfully waged a “battle of the cool” designed to popularize his extreme ideas and “reduce the cost of adherence” to the far right.

“The cool is a way to defuse and neutralize otherwise extremely violent” ideas, he added.

In October, Mr. Zemmour said his success would depend on his ability to appeal to both the conservative, bourgeois electorate and that of the Yellow Vests, the mostly working-class movement that protested against economic injustice that Ms. Le Pen has long courted.

Whether he can achieve that balancing act is far from clear, as shown by the attendance at the rally. The main economic proposal he outlined last weekend — slashing business taxes — is unlikely to speak to working-class voters.

Mr. Zemmour’s theatrical entrance into the convention center, to the sound of dramatic music, also did little to eclipse the fact that he has so far failed to garner support from any major political figure, or party. This remains a major difference from Mr. Trump, who could count on the powerful Republican Party and solid financial backing.

Mr. Zemmour said he was the target of the media and the elites. He praised the crowd before him for standing up to these attacks. “The political phenomenon of these rallies, it’s not me, it’s you!” he shouted.

But some of his supporters might also prove to be his greatest liability.

Midway through his speech, dozens of sturdy militants threw punches at several activists from SOS Racisme, an antiracism organization, who had stood on chairs at the rally and revealed T-shirts spelling out the phrase “NO TO RACISM.”

Prosecutors have opened investigations into the violence, including one against a man who lunged at and grabbed Mr. Zemmour as he walked toward the stage.

Mr. Diers, the spokesman, said the antiracism activists had acted provocatively and that he had called on supporters “not to use force unreasonably.”

Mr. Llorca, the communications expert, said that with such a polarizing campaign, Mr. Zemmour risked “being overwhelmed” by the extremism of his own supporters.

The French news media later reported that some of those who had attacked the antiracism activists were neo-Nazi militants. As they chased down the activists toward the entrance hall, wearing black mufflers that hid their faces, they were stopped by a security staff member.

“Thank you for being there,” he told them. “You did the job!”