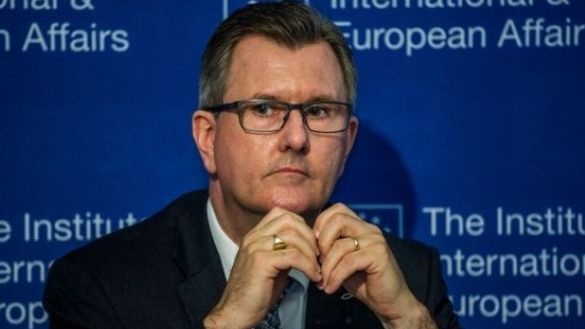 Sir Jeffrey Donaldson has written to DUP members reiterating his threat to collapse Stormont if the Irish Sea border is not removed.

The DUP leader criticised UK prime minister Boris Johnson for his lack of action on the issue, which he said was “not sustainable”.

Sir Jeffrey also criticised Mr Johnson over alleged lockdown-breaking parties at No 10, saying “no-one is above the rules”.

In the letter, seen by the PA news agency, Sir Jeffrey said: “Last Tuesday, I met with Lord Frost, the UK negotiator on the NI Protocol, and on Wednesday, I was challenging the prime minister in the House of Commons about the lack of movement on the Irish Sea border being removed.

“Everyone else was asking him about parties but I was determined to focus his mind on restoring NI’s place in the UK.

“His answer was a standard reply with little sign of movement. That is not sustainable.

“I have given space for talks. I have been reasonable, but Brussels is being unreasonable. These talks cannot go on for years.

“The prime minister must realise that if there is no progress then, as I said, on September 9th our continued participation in political institutions that are being used to impose the protocol is not sustainable.

“The uncertainty is deeply damaging on so many levels.”

Mr Johnson told Sir Jeffrey on Wednesday that he believed the Northern Ireland Protocol could be worked “differently”, but that the EU had to be convinced of this.

He did not rule out the use of Article 16 if talks with the EU do not progress.

The Government has repeatedly warned that it will trigger Article 16 to suspend elements of the protocol if progress is not made.

However there is mounting concern among some unionists in Northern Ireland that Mr Johnson has yet to follow through with that threat.

“We re-entered the NI Assembly in January 2020 based on the New Decade New Approach agreement and within it a commitment from the UK government to restore NI’s place in the UK internal market,” Sir Jeffrey added.

“It is time for the Government to fulfil that commitment.”

The DUP leader also hit out at the prime minister over alleged breaches of lockdown rules at No 10, telling members he buried his father at a Covid-compliant funeral.

“I buried my dad in lockdown. No one was above the rules. Anyone breaking the rules was wrong,” he wrote.

“Our family had a Covid compliant funeral despite us having a large extended family. It was tough when some of our family and close friends had to stay away from the funeral.”

He also hit out at Sinn Féin for its “double standards”, after Michelle O’Neill criticised the prime minister for undermining the public health message earlier this week.

“That’s why I found Sinn Féin’s defence of bringing hundreds onto the streets for the Bobby Storey funeral to be grossly offensive,” he said.

“Without a hint of embarrassment though, Sinn Féin rushed to microphones to criticise Boris Johnson.

“One rule for them another rule for the rest of us. Let us never forget Sinn Féin’s ability to have double standards.” –PA