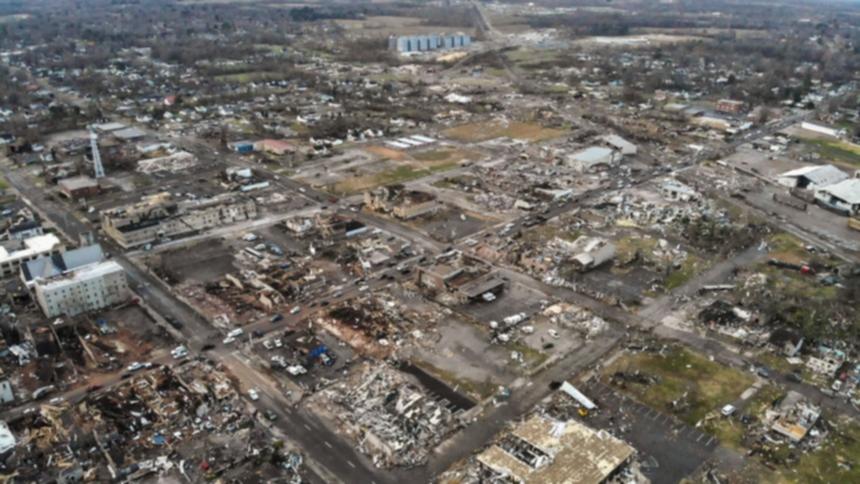 More details have surfaced of the devastating twisters that ripped through six US states and killed more than 100 people while leaving a trail of destroyed homes and businesses along a path that stretched more than 320km.

A candle factory in Western Kentucky where 110 people were working was one of the worst affected properties as dozens were feared dead after the tornado caused the buildings roof to entirely collapse.

Kentucky Governor Andy Beshear said about 40 workers had been rescued at the candle factory in the city of Mayfield, which had about 110 people inside when it was reduced to a pile of rubble.

It would be a “miracle” to find anyone else alive under the debris, he said.

“The devastation is unlike anything I have seen in my life and I have trouble putting it into words,” Beshear said at a press conference.

“It’s very likely going to be over 100 people lost here in Kentucky.”

CNN National Correspondent, Nadia Romero, was on the ground at the collapsed candle factory on Sunday where she shared the chilling details of the destruction with Weekend Sunrise.

Ms Romero said it had been an extremely tough day in Mayfield Kentucky, with dozens of people desperately searching for their loved ones amid the chaos.

“People are coming by and asking questions about their loved ones,” Ms Romero said.

“Some of them already know their loved ones have died and are just trying to locate them.

“One woman came by looking for her 30-year-old friend who was a worker at the factory and ended up finding her among the rubble.”

Watch terrifying footage of the tornado in the video player below

Ms Romero said another man had raced down to the factory after his wife of over 30 years called him in a panic during the storm.

“By the time he got down to the factory, it had completely collapsed and his wife was no where to be found,” she said.

“Have you seen my wife anywhere?’ He kept asking desperately.”

The workers were reportedly working overtime on the night of the storm to try and get all their Christmas orders done.

Ms Romero also said there were a few factors that made this tornado particularly deadly.

Locals of the area are used to spotting – and preparing for – tornadoes, but were blindsided by this particular storm.

These kinds of tornadoes aren’t usually seen in December.

It’s usually something locals experience in the months of March, April and May.

The major and most deadly factor is that the tornado hit at night, according to Ms Romero.

The genesis of the tornado outbreak was a series of overnight thunderstorms, including a super cell storm that formed in northeast Arkansas.

“That’s particularly dangerous because people may be asleep and not hear it and they also can’t see it coming,” she said.

“Lots of people in the town are used to spotting them, but you just can’t see them in the dark.

“So, you don’t know there’s a tornado until it is right near you.”

US President Joe Biden approved an emergency declaration for Kentucky following the deadly tornadoes that battered the state.

“And we still don’t know how many lives were lost and the full extent of the damage.”

Mr Beshear said the collection of tornadoes was the most destructive in the state’s history.

The rescue efforts will focus in large part on Mayfield, home to some 10,000 people in the southwestern corner of the state where it converges with Illinois, Missouri and Arkansas.

Fire and police stations in Mayfield were destroyed, hindering the emergency response.

“We could feel the wind … then we did a little rock,” Kyanna Parsons-Perez, a worker at the candle factory, told NBC.

“And then boom everything came down on us.”

Mayfield Fire Chief Jeremy Creason, whose own station was destroyed, said the candle factory was diminished to a “pile of bent metal and steel and machinery” and that responders had to at times “crawl over casualties to get to live victims”.

Paige Tingle said she drove four hours to the site in the hope of finding her 52-year-old mother, Jill Monroe, who was working at the factory and was last heard from at 9.30pm.

“We don’t know how to feel, we are just trying to find her,” she said.

We don’t know how to feel, we are just trying to find her

One person was killed and five seriously injured when a tornado tore through a nursing home in Monette, Arkansas, while a few miles away in Leachville, Arkansas, a tornado destroyed a general store, killing one person, and laying waste to much of the city’s downtown.

“It really sounded like a train roaring through town,” the sheriff’s office said.

In Illinois, at least six workers were confirmed dead when an Amazon warehouse collapsed in the town of Edwardsville late on Friday.

Rescue workers were searching for people trapped in the rubble.

Drone footage showed a chaotic scene in the early morning dark, with many emergency vehicles around the area and rescuers with flashlights combing through debris.

The roof appeared to have been peeled back off the metal skeleton of the building.