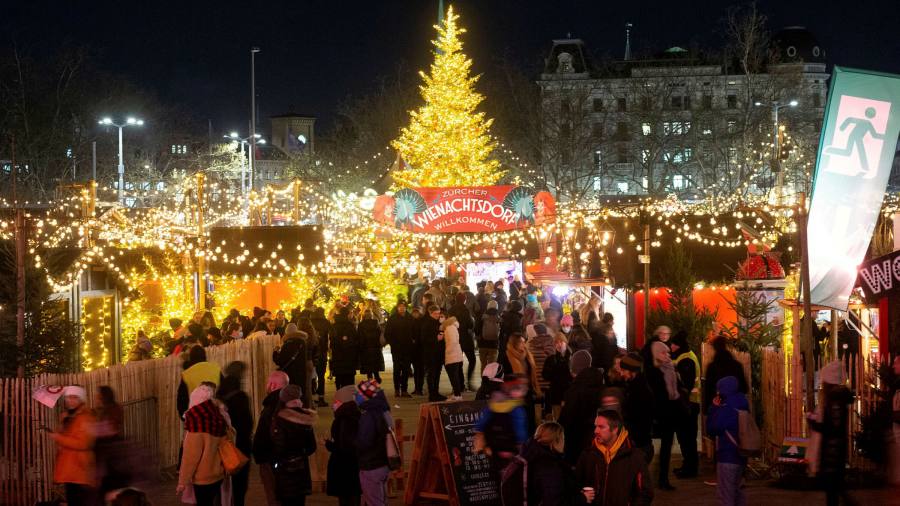 Inside, three advent candles are flickering on the altar and weak light is beginning to filter through the Chagall stained glass windows at the end of the choir. Every Wednesday for the past month, the Fraumünster church, former seat of the abbess-rulers of the city, has held a short lauds service of Bach organ music.

It is 7.30am. I’ve had barely a nod of sleep. But I have contrived to make this December morning as festive as I can. And so here I am.

The crowd is large and mixed. The Swiss rise painfully early. Some young friends meeting before work. Coiffed retirees from Lake Zurich’s Goldküste. The slicked hair and zippered gilets of Paradeplatz — private bankers with consciences to assuage.

Also currently in the scales of the gods: the results of my PCR test, for which I’ll need good news to fly back to London and see my family for the first normal(ish) Christmas in two years.

Switzerland is currently in the grip of a coronavirus wave more severe, and less cared about, than almost any other in the pandemic. It isn’t even because of Omicron. One-third of Swiss have yet to take even a single dose of vaccine. Just over one-tenth have had a booster. No country in western Europe is more poorly positioned.

Outside the old abbey church, in the Münsterhof, vans are delivering the day’s supplies of glühwein, wheels of raclette and items of expensive wooden tat to the stalls of the Christmas market.

Authorities deem it necessary for outdoor market-attendees to have their Covid certificates checked, even though the crowds in the breezy outdoors are far less dense than those in the crush of the perfume and cosmetics hall in the ritzy department store Jelmoli, just down the road, where the only preconditions to entry are a lack of financial sense and taste.

Switzerland’s Covid policy is at sixes and sevens. I’ve swerved between support for its approach — quality of life, not just the longevity of it, is something the government genuinely factors into its thinking — to despair at its lack of mettle where it matters, specifically on vaccinations.

Bern says it is doing everything it can to avoid another lockdown. But, as elsewhere in Europe, no one really has much faith the government knows any better than they do.

Up in Zermatt earlier this month, skiing with a friend, I paid a visit to the Walliserkanne: a pub in the village that has become a national symbol of resistance to government impositions. The owners repeatedly refused to check customers’ vaccine or test status. Eventually authorities were forced to stack huge concrete blocks in front of the doors to the venue. It’s open again now. A slightly tatty A4 sheet in the window, reads: “Thank you for all your support!”

The season in Zermatt, Europe’s highest ski resort, is off to a sluggish start. A snap decision by the Swiss government to put the UK on a quarantine list for a week has hit visitor numbers already.

For this reason alone, I suspect, we manage to nab a spot at the bar of Elsie’s, a local wine bar, usually packed, which a newspaper clipping on the wall declares as the haunt of silk-stockinged bankers and aristocrats. And now me.

In Zermatt, unlike Zurich, the concerns over what another bout of tough restrictions might do are more palpable. Christina, the manager of Elsie’s, recounts how last year she was distraught as she threw crates of fresh food — lobsters, oysters — into the bin, after a snap lockdown ended the season.

The outlook for Switzerland in the first weeks of 2022 is not a good one, based on how things are already developing with the Omicron variant in the UK, where Covid antibody seroprevalence is significantly higher than here in the Alps.

But a part of me hopes that the Swiss will tough it out. It’s been very easy these past two years, after all, to deride things like music performances, drinking, socialising or skiing as frivolous extras to life. But take out all those extras and what ends up being left?

Walking home with Bach’s Christmas prelude ringing in my ears, I take a glass of glühwein for the stroll.