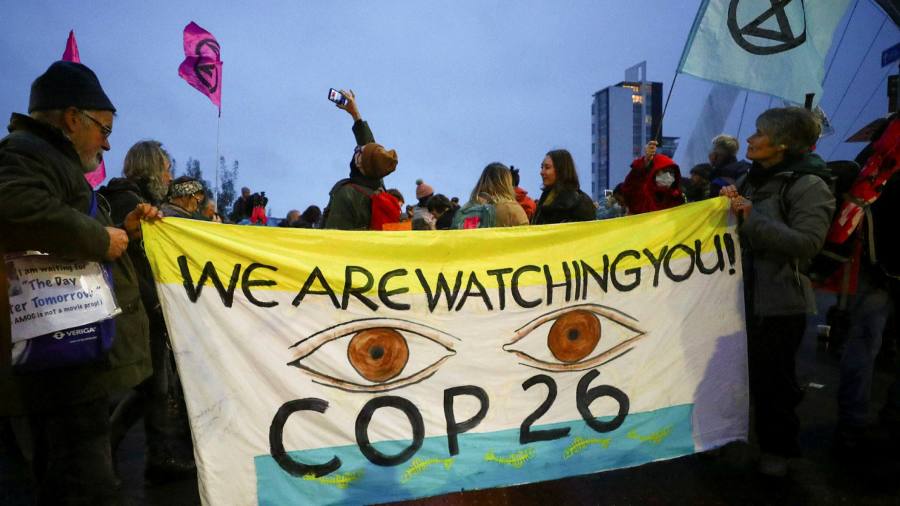 A battle has developed at the UN climate summit over the sensitive issue of how soon after the end of COP26 countries will submit new climate targets to the UN, after pledges made so far have fallen short.

The UK, US and EU, along with some others, want all countries to come up with new targets by the end of 2022, a significant acceleration from the 2025 deadline in the Paris climate accord.

However, China and other big emitters are resisting this commitment, insisting on staying with the original five-year timeframes in the Paris pact.

The UK, as the COP host country, aims to address the issue as one of the major sticking points in the final texts that will sum up the conclusions of the COP26 when negotiations end, according to officials.

The first version of those texts were published on Wednesday morning, and will be debated by countries in a plenary session.

The document “urges parties to revisit and strengthen the 2030 targets in what is known as nationally determined contributions, as necessary to align with the Paris agreement temperature goal by the end of 2022”.

The text will still undergo significant revisions as countries fight over the language in the coming days.

As negotiations enter their final days, significant rifts are emerging between countries over how to approach the goal of limiting global warming to 1.5C, set down as ideal in the Paris accord.

Current national pledges, which were submitted by 152 countries ahead of and during the Glasgow summit, put the world on course for between 2.5C and 2.7C of warming by the end of the century.

To address the shortfall of the existing pledges, the UK and others had hoped to persuade countries to come back with updated climate targets, known as nationally determined contributions, next year.

EU climate chief Frans Timmermans alluded to the issue as he addressed the plenary at COP26 on Tuesday afternoon.

“We are moving in the right direction but the world is still too far away from our 1.5 degree goal,” he said.

“We need to make sure we take decisions that put us on track to reach our goal, and this needs to be done within a year because time is running out.”

The 2015 Paris climate accord, approved by 197 countries, aims to limit global warming to well below 2C. However, as the climate impacts of 2C become starker, an increasing number of countries believe that capping warming at 1.5C, the much more difficult goal, is imperative.

The UK’s unofficial slogan at the COP26 summit of “Keep 1.5 Alive” as the COP host means that it has been pushing hard for other countries to take bigger steps to cut emission to make that possible.

Greenhouse gas emissions would need to fall by roughly half this decade from roughly 50bn tonnes presently, to keep the world on a pathway for 1.5C of warming, according to the UN Environment Program.

US climate envoy John Kerry said on Tuesday that he was negotiating into the early hours, in a sign of the tensions as countries stake out their positions in the final week. “It’s much too early for a 3am night at the COP,” he said. “Maybe on Friday but not on Monday [night].”

The summit is due to end at 6pm on Friday, but could push into overtime if negotiators fail to agree on items including the timing of new targets, as well as rules for implementing the Paris accord.