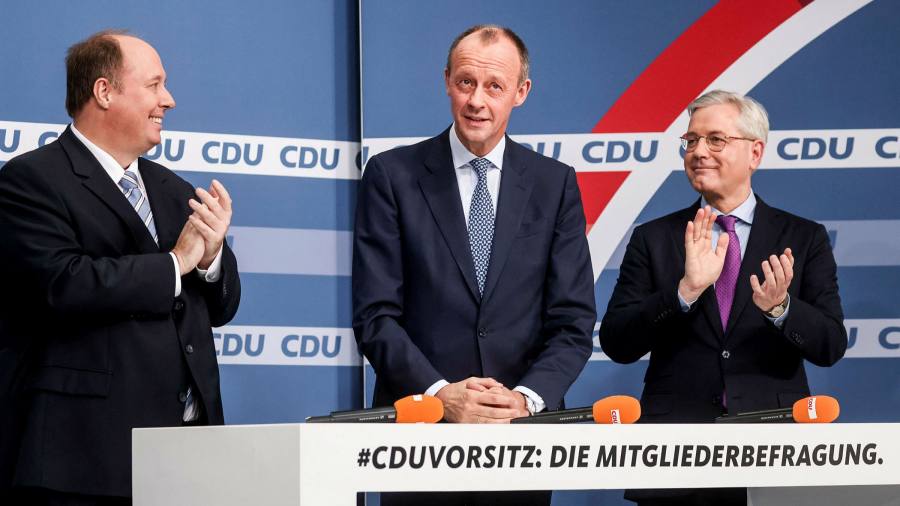 The conservative MP Friedrich Merz is to become leader of Germany’s centre-right Christian Democratic Union after soundly winning a popularity poll of its members.

The 66-year-old’s task will be to rebuild the morale of a party still reeling from defeat in September’s Bundestag election, when it chalked up the worst result in its 76-year history.

Merz won 62.1 per cent of the vote, beating his rivals Norbert Röttgen, the former chair of the Bundestag’s foreign affairs committee, and Helge Braun, who served as ex-chancellor Angela Merkel’s chief of staff. He will be formally elected leader by 1,001 delegates at a digital party conference on January 21-22.

It is third time lucky for Merz. His last two bids for the CDU leadership ended in narrow defeat — first to Annegret Kramp-Karrenbauer in 2018 and then to Armin Laschet, the former prime minister of North Rhine-Westphalia, in January this year.

Both were considered moderates committed to Merkel’s centrist, pragmatic course while Merz is a conservative who often complained that the CDU had drifted too far to the left under Merkel, his old rival.

But Merz stressed on Friday that he would seek to represent the “full spectrum” of the CDU. He said he wanted it to be a party “where different political ideas, opinions and tendencies find their place”, adding: “I, at least, will do everything I can to achieve this.”

Merz will succeed Laschet, who ran as the CDU’s candidate for chancellor in September’s election and lost to Olaf Scholz of the Social Democrats, leading the Christian Democrats into opposition for the first time in 16 years and only the third time in the party’s history.

Friday’s poll result marks the first time CDU grassroots members have been involved in selecting a leader. As such, its outcome was almost a foregone conclusion: Merz has long enjoyed cult status among rank-and-file Christian Democrats.

However, some in the party worry it is harming its chances of returning to power by electing a leader who is seen by large sections of the electorate as an anachronism, a man from a bygone age whose traditionalist views are out of step with those of modern Germany.

In the leadership contest he faced two rivals, Röttgen and Braun, who are seen as moderates eager to bring more women into senior roles in the CDU and make it more appealing to younger voters, in part by focusing more on halting climate change.

Merz described the view of him as a throwback to a bygone age as a “caricature”, one he would “gradually correct”.

Merz rose to prominence in the 1990s, when his rhetorical brilliance and economic liberal credentials marked him out as a rising star in the CDU. He became leader of the Christian Democrats’ parliamentary group in 2000 but lost the job in a power struggle with Merkel and in 2009 quit the Bundestag to pursue a career in business.

From 2016 until last year he was chair of BlackRock Germany, a job that made him a multi-millionaire.

German media have speculated that Merz will claim the job of leader of the CDU’s parliamentary group, replacing the incumbent Ralph Brinkhaus. Asked on Friday about his intentions, he said the issue was “not on the agenda right now”.