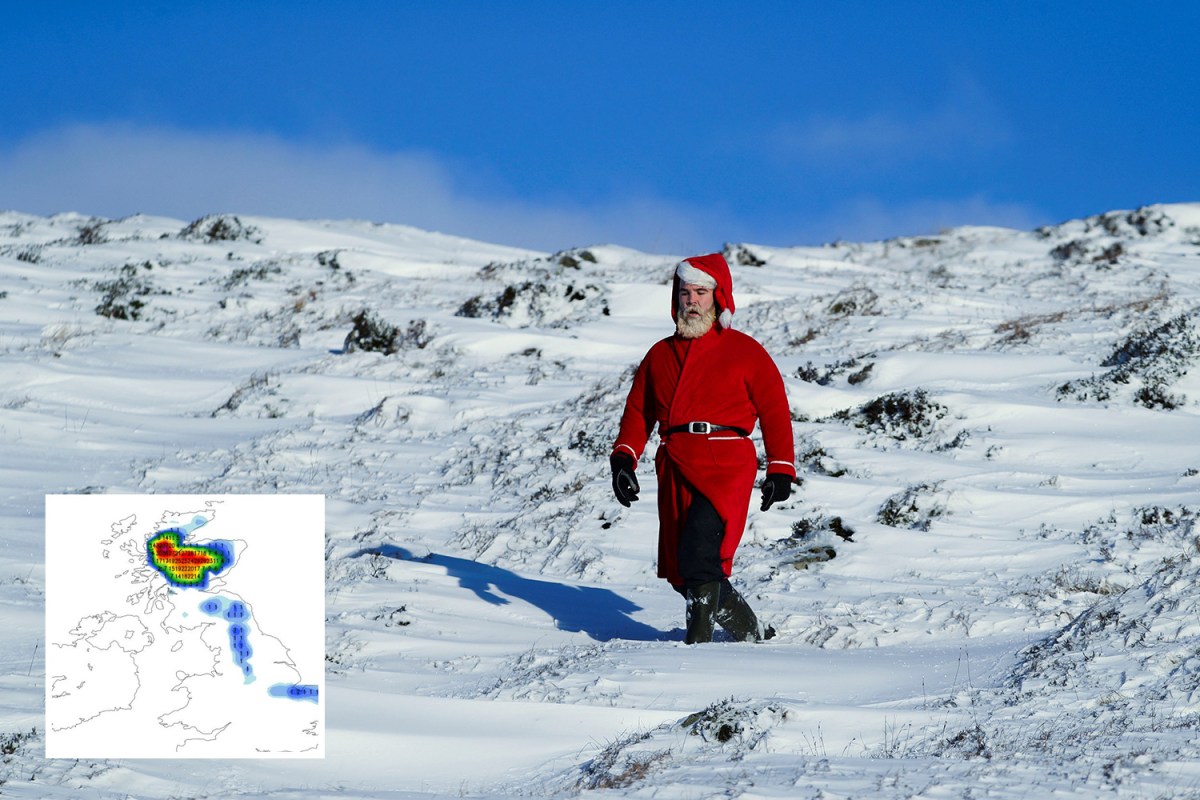 BRITS are bracing for a Christmas Day “snowbomb” as a FOOT of the white stuff could hit parts of the country with flurries expected across south England.

Forecasters are warning of “unsettled weather” over the festive period as the Met Office confirmed some areas could see snow fall.

The agency says the greatest chance of snow will be in north England and Scotland, with up to 5cm of snow accumulating over areas elevated around 400-500m.

But according to one forecaster, Brian Gaze of The Weather Outlook, Christmas Day morning could see up to a foot of snow in parts of Scotland with lighter coverings in East Anglia and the Midlands.

He says it may well be a very White Christmas after all, and it’ll be an “all-time classic” for snow fans.

More southern parts of the country could also be struck by heavy snow flurries – which could cause chaos on the roads as families dash to see their loved ones.

Colder air starts to push south from Christmas Eve, bringing along with it some winds and a beautiful blanket of snow in the north.

Temperatures are set to plummet over the festive period as Storm Corrie sweeps in, with the south of the country also expected to see some hill snow.

Meteorologists earlier predicted snow could arrive as early as Friday in the South, while the Met Office warned blizzards could be in store for Scotland.

The Met Office’s deputy chief meteorologist, Chris Bulmer, said: “The Christmas period will be a fairly unsettled spell across the UK this year.

🔵 Read our weather forecast live blog for the latest updates

“Many will see wet and cloudy conditions as mild air dominates over the south and west of the UK.

“Where this mild air meets colder air trying to sink south there is a chance of some Christmas snow, this looking most likely over the Pennines, however exactly where this boundary will be is still uncertain.

“In the far north cold conditions and clearer skies will bring a more wintry feel. For many areas a brisk easterly wind will bring a notable wind chill.”

According to maps from WXCharts, after sweeping into Scotland today, the band of snow will gradually move south.

Director of Weathertrending, Sarah Thornton, told The Sun the UK will find itself in a “battleground” between freezing air coming from the Arctic and Scandinavia, and much milder air trying to head in from the Atlantic.

“Most models now suggest that the cold air will be winning and spreading lower temperatures southwards as we head through Christmas Day.

“However another assault of mild air will arrive from the southwest through the day, bringing rain. At the boundary between the two, there’s an increasing chance of snow.”

She suggested the higher ground of Wales, the Midlands and the Peak District could also see some snow on Christmas Day.