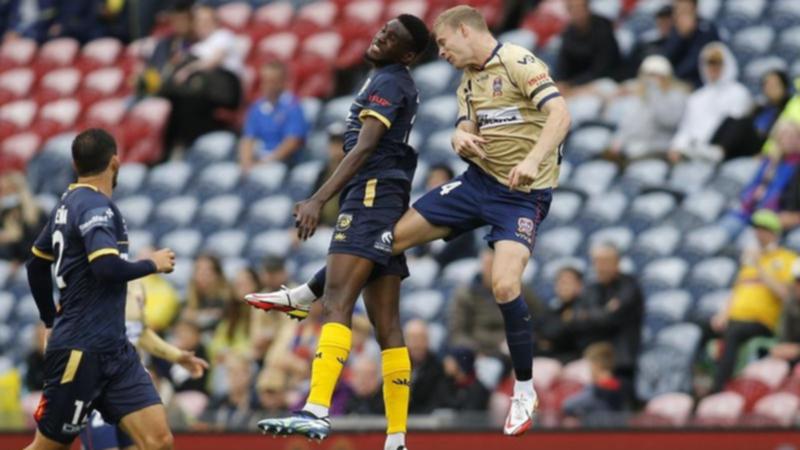 A goalscoring debut for teenager Jacob Farrell has the Central Coast Mariners off to a perfect start under Nick Montgomery as they claimed a 2-1 A-League Men F3 derby win over the Newcastle Jets.

While they enjoyed just 32 per cent of the possession, the Mariners made their opportunities count in their season opener in front of a crowd of 6424 at a rain-soaked McDonald Jones Stadium in Newcastle.

Josh Nisbet bagged his first A-League goal after the half-time break when some sloppy play at the back allowed him to pop up and nudge the ball past Jets goalkeeper Jack Duncan.

Left-back Farrell, who turned 19 on Friday, headed in shortly after when he emerged from a sea of bodies to collect an inswinging Cy Goddard corner into the back of the net.

That looked to be the game, but Valentino Yuel gave the Jets some hope with a late goal to set up a grandstand finish.

The Jets looked vulnerable the moment Jason Hoffman climbed above Goddard to challenge for a bouncing ball in the opening 10 minutes and was then taken off after landing awkwardly.

The Mariners looked to play in behind the Jets’ high defensive line with Marco Urena slipping the attentions of Matt Jurman on two occasions but unable to find the end product.

The Jets warmed into the contest as the first half wore on and most of their attacking threat came in the shape of Daniel Penha.

While he was booked by referee Kurt Ams for obstructing a Mariners’ restart, the Brazilian import combined well with Savvas Siatravanis and Beka Mikeltadze but none of them were able to crack the away side’s resolve.

Siatravanis was at the heart of the first half’s liveliest moment when he was lightly tapped by Central Coast goalkeeper Mark Birighitti as the No. 1 cleared a ball in behind.

It was the slightest of glances, but it didn’t stop Siatravanis falling to the turf and appealing for a foul that led to a gentle melee.

After pressing their case towards the end of the opening half, the Jets fell in a heap when Kosta Grozos gave the ball away playing out from the back.

Nisbet was the beneficiary and buried the ball to Duncan’s right in the 50th minute.

Farrell headed in the Mariners’ second soon after, but Newcastle coach Arthur Papas breathed life into the last 20 minutes with the introduction of Yuel.

The 27-year-old headed home an Angus Thurgate cross in the 78th minute as the Jets went in search of an equaliser.

Mikeltadze hit the post before Yuel and Birighitti sparked a fresh coming together after scrapping for a ball slipping along near the Mariners’ goalmouth.

The Jets had claims for a penalty waved away when Jordan O’Doherty was brought to ground by Dan Hall, but despite Newcastle’s late assault the Mariners were able to hold firm.