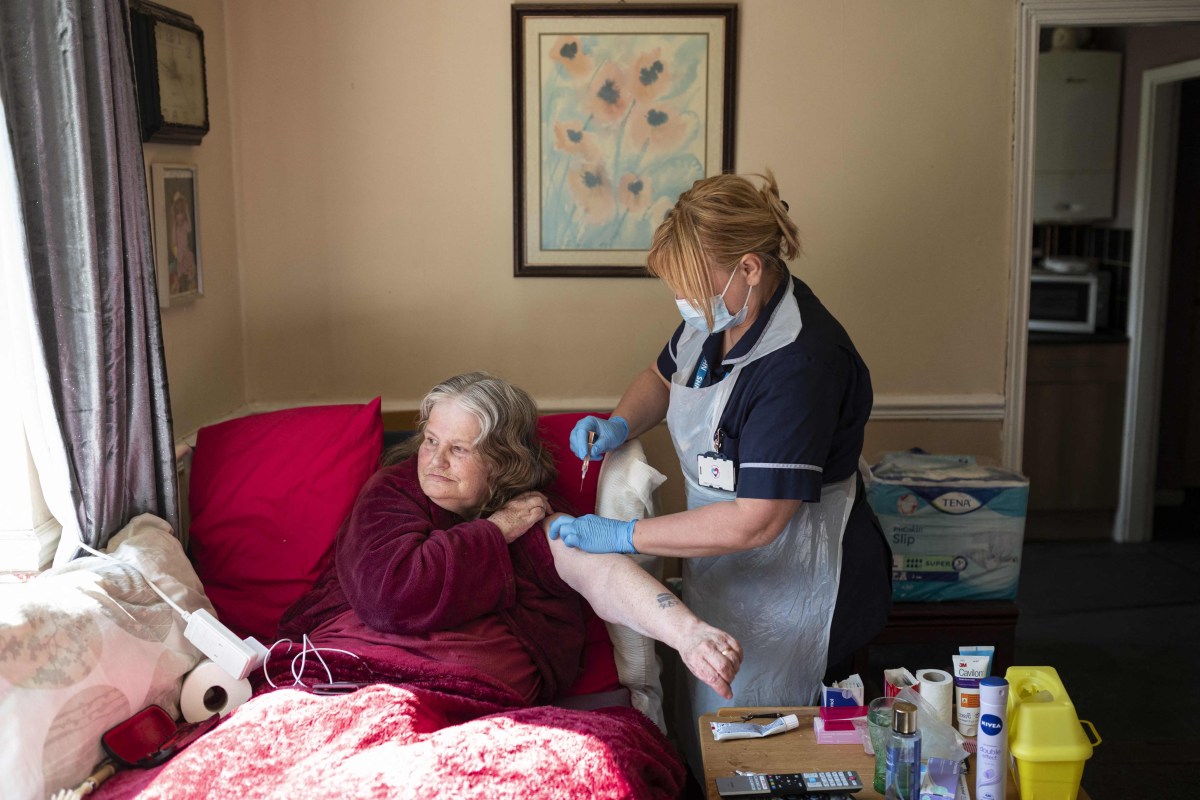 A CARE home boss has called for self-isolation to be scrapped for workers with Covid who have no symptoms amid critical staff shortages.

The healthcare sector is feeling the pressure as thousands of employees have been forced to stay off work, despite the majority being asymptomatic.

The crippling lack of care staff has created a huge backlog of patients stuck in hospital, as they cannot be discharged to understaffed facilities.

Stein says his company – which runs around 60 care homes across the UK – has over 100 staff members currently isolating.

He explained the spread of the “drastically milder” Omicron variant and the vaccine mandate for care home staff meant those who are asymptomatic should be able to pitch in to subdue the staffing shortage.

A string of hugely positive studies show Omicron IS milder than other strains, with the first official UK report revealing the risk of hospitalisation is 50 to 70 per cent lower than with Delta.

Covid booster jabs protect against Omicron and offer the best chance to get through the pandemic, health officials have repeatedly said.

The Sun’s Jabs Army campaign is helping get the vital extra vaccines in Brits’ arms to ward off the need for any new restrictions.

Stein has now urged the government to get rid of the isolation requirement for Covid positive essential workers who are otherwise well.

The care home chief added that around 500 of his employees have had to isolate throughout the pandemic, although most have had no symptoms.

Stein told the Daily Mail: “We now have had more than 500 team members – around a quarter of our workforce – who have tested positive for Covid. Most of them have been asymptomatic.

“In a highly vaccinated population like the UK, where a drastically milder version of Covid is becoming prevalent, it is time for the Government and public to accept that asymptomatic people shouldn’t isolate.

“Evidence suggests that if you’re double vaccinated and boosted – like all social care staff are mandated to be – you aren’t going to get seriously ill.

“A vast majority of residents are also vaccinated. There is a flaw in the argument that the purpose of isolation is to prevent the NHS being overwhelmed.

“Most people with Covid are not ending up in hospital and those that are are less ill and for a shorter time.”

Stein suggested the shortfall of care staff is creating a “knock on effect” seeing healthy patients being unable to leave hospitals.

He pleaded with the Government to remove the isolation period after the requirement for a PCR test after testing positive on a lateral flow test was binned.

Tory MPs are among a legion of voices demanding the quarantine period be cut after soldiers were put on standby to plug the absence of critical workers.

“At this point the cure could be worse than the disease itself,” Stein continued.

“In December, there were roughly 14,000 patients who had been stuck in a hospital bed for over three weeks.

“Nearly 9,000 of these were deemed ready for discharge, but the number of carers isolating meant care homes didn’t have the staffing levels to receive them.

“This clearly has a knock-on effect and is preventing other patients from receiving treatment.”

It comes as 24 hospital trusts declared critical incidents after being inundated with patients, while others have had to scrap priority services and essential operations.

Extra beds are being used at an emergency Nightingale hospital in Manchester to help deal with wards at capacity.

Daily Covid cases have been over 100,000 for almost a fortnight, with one in 10 NHS staff off sick on New Year’s Eve.

And UK-wide, more than 3.7million people had the virus in the last week of 2021 – the highest since records began.

Despite the milder illness, anyone who tests positive has to isolate for a week.

Before the Christmas break, Health Secretary Sajid Javid cut the number of isolation days from 10 to seven.

Last week officials in the US slashed their isolation requirements from 10 days to five, prompting calls for the UK to follow.

The Prime Minister’s official spokesman said the Government are “keeping an extremely close eye on NHS capacity at all times.”