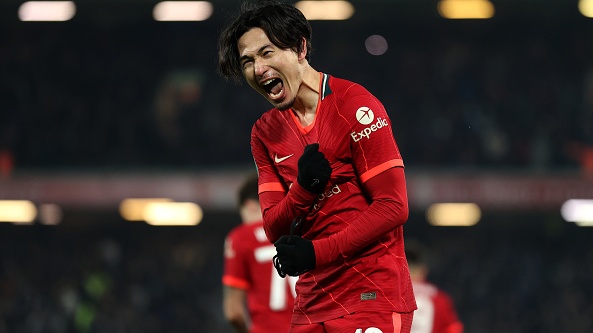 Second-choice goalkeeper Caoimhin Kelleher saved two penalties in the shoot-out which Liverpool won 5-4 against Leicester to send them into the semi-finals of the Carabao Cup.

Substitute Diogo Jota struck the winning spot-kick — having come off the bench to score — but the real hero was Takumi Minamino who made it 3-3 with seconds remaining of six added minutes.

The visitors crumbled under the pressure exerted in the second half having twice cruised into a two-goal lead as Jamie Vardy scored his ninth and 10th goals in 14 appearances against the under-strength Reds.

Alex Oxlade-Chamberlain briefly made it 2-1 before a brilliant James Maddison strike restored the Foxes’ advantage.

However, the introduction of first-team reinforcements for the second half changed the dynamic as Jota and League Cup specialist Minamino, with his sixth in five appearances, forced a shoot-out.

Steven Bergwijn scored his first goal of the season and provided an assist to help Tottenham continue their momentum under Antonio Conte by beating West Ham to reach the Carabao Cup semi-finals.

The Netherlands forward broke the deadlock after 29 minutes and it was the catalyst for three goals in five minutes with Jarrod Bowen’s equaliser quickly countered by Lucas Moura putting Spurs 2-1 ahead which is how it finished.

Victory helps Tottenham take another step towards ending their trophy drought dating back to 2008 and made it five wins under their new boss.

The visitors were without top goalscorer Michail Antonio due to a positive Covid-19 test while Spurs reverted to their usual 3-4-3 formation under Conte, who made six changes from Sunday’s draw with Liverpool.

Bergwijn was one of those recalled for a first start in nearly two months and his rustiness was clear early on but his fellow forwards combined after 12 minutes for the opening chance.

Moura turned by the halfway line and sent Harry Kane away but his left-footed shot was well saved by West Ham’s second-choice goalkeeper Alphonse Areola.

Spurs had gone with captain Hugo Lloris between the posts and he was forced to parry away a Bowen free-kick soon after before the opener did arrive to spring the London derby into life.

Pierre-Emile Hojbjerg was the creator with a smart pass into Bergwijn, which he received back inside the area and then returned the favour to allow the Dutch international to tap home in the 29th minute.

It was Bergwijn’s first goal of the campaign and sparked a crazy five-minute spell with Tomas Soucek testing Lloris on two occasions and bringing out the best of the Frenchman who produced a couple of wonderful finger-tip saves in quick succession.

The Tottenham captain was helpless moments later though when Bowen did level after 32 minutes.

Eric Dier was initially at fault with a slack ball out from the back and, after Manuel Lanzini’s shot was controlled by Bowen, the ex-Hull attacker turned impressively before he rifled into the bottom corner for his fifth goal of the season.

Yet Moura had the final say on the half when Bergwijn, now full of confidence, skipped past Lanzini and squared for his fellow forward to stroke home from close range.

Spurs had needed a timely Oliver Skipp clearance to thwart Soucek once more before the break and Moyes’ side continued to ask questions after the restart.

Goalscorer Bowen was proving a constant thorn in the home defence and peeled off Dier to control an excellent ball over the top from Lanzini but Lloris raced out to get a crucial touch.

Conte had seen enough and turned to his bench on the hour mark. Harry Winks and Son Heung-min were introduced and he also reverted to Sunday’s formation of three in midfield in an attempt to wrestle back some control.

West Ham had plenty of ammunition too and Moyes called for Pablo Fornals and Said Benrahma with 22 minutes left. The latter almost made a difference within 60 seconds.

Hammers youngster Harrison Ashby crossed in for Benrahma, who controlled on the turn and let fly but saw his shot balloon over.

The substitute had two further efforts before full-time, including a superb volley that went just wide, but Spurs held firm to reach the semi-finals of this competition for the third time in four years.

An own goal and a Jorginho penalty fired a mix-and-match Chelsea side into the Carabao Cup semi-finals after a 2-0 win at Brentford.

But it was substitutes N’Golo Kante, Reece James, Mason Mount and Jorginho who turned the tie in Chelsea’s favour.

They left it late but Pontus Jansson’s own goal finally broke the deadlock and Jorginho wrapped up victory from the spot.

The Bees created the first clear chance when Rico Henry tore down the left wing and, after his initial cross was blocked, pulled the ball back to Bryan Mbeumo, whose cross found the head of Yoane Wissa only for Kepa Arrizabalaga to pull off a fine reaction save.

England under-19 forward Soonsup-Bell was finding some early space in between the Brentford backline and his cross from the left found Ross Barkley, but the midfielder’s volley was well off target.

Moments later Marcos Alonso’s cross was met with a wild volley over the crossbar from Cesar Azpilicueta.

Kepa came to Chelsea’s rescue again when he palmed away a powerful header from Mathias Jensen and then saved bravely at the feet of the marauding Henry, before teenager Simons forced the first save from Alvaro Fernandez with a shot from the edge of the area.

Moments before half-time the best chance of the opening half fell to 18-year-old Vale, left all alone in the area only to head Azpilicueta’s cross straight at Fernandez.

Bees keeper Fernandez was scrambling at the start of the second period when Saul’s cross came off defender Mads Bech Sorensen and threatened to creep inside the far post.

Chelsea’s kids had all departed by around the hour mark with Jorginho, Mount, Christian Pulisic and James sent on as reinforcements, while Bees boss Thomas Frank turned to Ivan Toney, recently recovered from Covid.

But it was the arrival of Kante, who Tuchel had maintained would not be involved, who provided the spark behind Chelsea’s opener.

The midfielder’s quick feet on the edge of the area evaded a couple of Brentford challenges before he slid in James, whose cross was bundled into his own net by Jansson.

Three minutes later Chelsea had their second after Mount was clumsily tripped by Fernandez and Jorginho fired the Blues through.