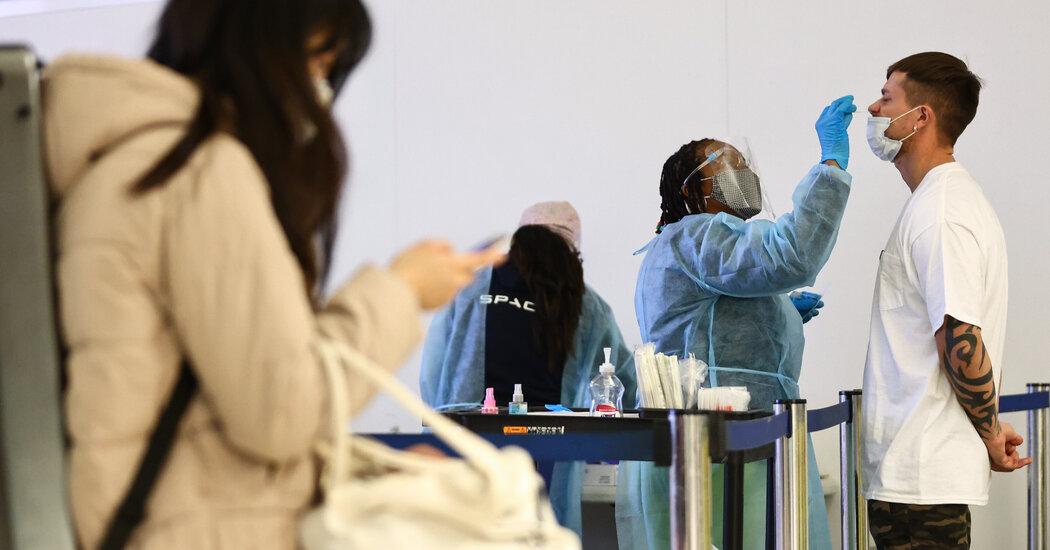 California will require health care workers to get booster shots by Feb. 1, officials announced on Wednesday, as part of a series of measures intended to stave off hospital staffing shortfalls and to keep schools open despite the unsettlingly rapid spread of the Omicron variant of the coronavirus.

The state will also require workers in high-risk congregate settings like nursing homes and prisons to get booster shots.

Public health officials said the Feb. 1 deadline applies to workers who are eligible for booster shots under federal guidelines because it has been six months since they received their second dose of the Pfizer-BioNTech or Moderna vaccine, or two months since they received the single-dose Johnson & Johnson vaccine. People who were vaccinated more recently will be required to get a booster within 15 days of becoming eligible.

California officials also announced plans to provide one or two rapid tests for each elementary or secondary school student for use when the children return to school from winter break; to broadly expand testing-site hours; to deploy hundreds of additional workers to strained health care facilities; and to aggressively promote booster shots.

Gov. Gavin Newsom said in a news conference on Wednesday that the state hadn’t yet formally added booster shots to its definition of “fully vaccinated,” but that officials were considering.

Almost 9 million Californians have received at least one additional dose, he said, but he added, “We need to increase that number if we’re going to hold the line.”

Although scientists in California were the first in the nation to find a case of the Omicron variant in their state, the variant was quickly detected across the country, and in a matter of a few weeks became the dominant cause of coronavirus infections in the United States, accounting for nearly three-quarters of new cases.

Mr. Newsom said that more than half the positive test samples sequenced in California recently have been found to involve the Omicron variant, probably a conservative estimate of its actual prevalence.

As the Omicron wave has overwhelmed much of the country, particularly in places where restrictions have largely been lifted, California’s leaders have sought to paint a less dire picture, while also underscoring the need to prepare.

“We can see where the hockey puck is going, and it’s always better to skate there than where it is,” said Mayor Sam Liccardo of San Jose. “The good news is, we know what we have to do, and that is get boosted and wear masks. So there’s no point in waiting.”

Even before the emergence of the Omicron variant, communities across the state had begun to require people to show proof of vaccination or recent negative test results before entering indoor restaurants or other businesses.

And in recent days, restaurants and other businesses have voluntarily shuttered when employees have tested positive.

For many Californians, the memory still looms large of the traumatic surge last winter that stretched hospital intensive care units to the breaking point and made for grim, lonely holidays. Mr. Newsom noted on Wednesday that roughly 3,600 people were in intensive care units in the state right now, compared with almost 22,000 almost a year ago.

The governor and other officials have emphasized that keeping schools open is a top priority. “California schools have been open because of, not despite of, our priority on safety,” the governor said in a statement made jointly with a range of the state’s biggest education organizations, including the California Parent Teacher Association and several unions.