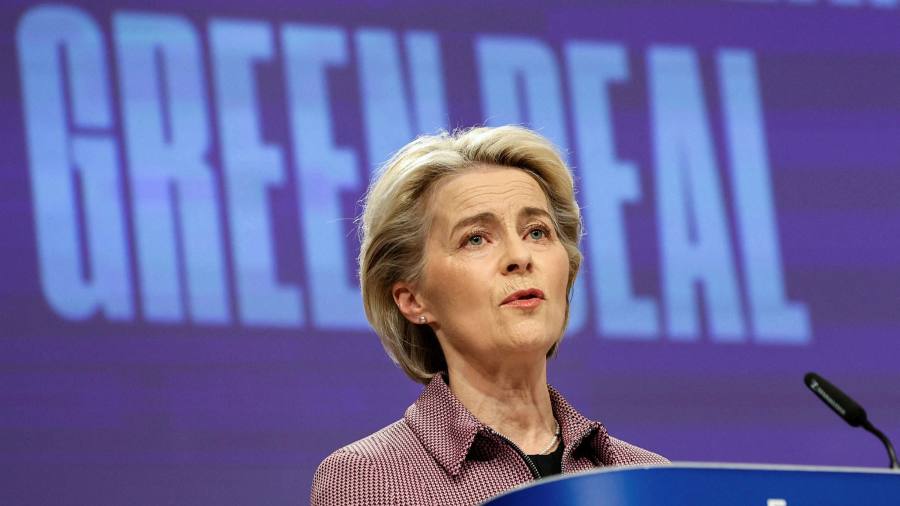 Back in June when the European Commission announced their president’s jet-setting tour, we did flag the cognitive dissonance of leaving a large carbon footprint just to spread the news of extra money for climate-related projects. After a story first reported by The Telegraph earlier this week, the commission is now trying to save face and justify why Ursula von der Leyen needed to be booked on flights as short as the 50km between Vienna to Bratislava. I’ll give you the rundown of the arguments and how the backlash in Germany is shaping up.

Another story that won’t go away is the so-called mink-gate in Denmark, a year-old scandal that is coming back to haunt Prime Minister Mette Frederiksen. We’ll bring you the latest in this saga and why she is accused of a cover-up.

And in Czech news, with President Milos Zeman out of intensive care, we’ll have a look at what comes next in the country’s government formation.

Just days ago, Ursula von der Leyen addressed the COP26 climate conference in Glasgow, calling “on all of us to do whatever it takes now to limit global warming”, because nature could no longer pay the price of carbon.

That statement stands in stark contrast with the European Commission president’s own air travel policy — booking a private jet to criss-cross Europe for photo-ops in each capital where a national spending plan for the country’s own slice of the EU’s €800bn post-pandemic fund was approved (Details of each trip are available here).

The commission argued these trips were necessary to remind citizens of the EU money and joint EU goals (including a greener economy) underpinning those plans. “It is very important for citizens to understand the European dimension of these programmes,” said commission spokesperson Eric Mamer.

Why von der Leyen couldn’t take a train instead of a flight from Vienna to Bratislava? Because she had to make several stops that week, Mamer said, so the plane was booked for the entire trip. Also, the airline has a carbon offsetting programme, he added.

“We only use those kind of flights when the calendar and the logistics don’t allow us to take a different means of transport,” he said. One time in June, von der Leyen took a train from Brussels to Strasbourg instead of flying. Also, she’s a vegetarian. And the commission’s headquarters recycle rain water.

Still, the backlash was strong, especially in Germany, where the Bild tabloid picked up the story. Jana Schimke, an MP from von der Leyen’s own party, the Christian Democratic Union, said that “if you want change, you have to lead by example. Otherwise you lose credibility.” Michael Jäger, head of the Taxpayers Association of Europe, said the 50km flight was an “environmental sin”.

And Liberal MEP Moritz Körner, who is part of the current German coalition talks, wrote that he regrets having voted for her as commission president and that she should go “at the latest in 2024”.

As with other scandals, the commission is counting on this to blow over. But the reactions do show that walking the walk when talking green policies does matter, increasingly so.

Should EU officials be banned from short-distance air travel? Click here to take the poll.

Exactly one year after Denmark’s government shocked the world by ordering the deaths of millions of mink, the fate of the deceased mustelids continues to haunt centre-left Prime Minister Mette Frederiksen, writes Richard Milne, Nordic and Baltic Correspondent.

Frederiksen, leader of the Social Democrats, is widely seen as the most powerful modern prime minister in Copenhagen so was always likely to be in a tough spot over what has become known as “mink-gate”.

The controversy in recent days has focused on why Frederiksen and several top officials in her office have deleted all their text messages from that period.

At a late-night press conference on Wednesday, Frederiksen conceded that the language used by some officials — one said “close the shit” about the mink industry — was harsh, but added: “Live with it”.

She stressed that she had been told by advisers to automatically delete her SMS after 30 days for security reasons in the months before the scandal, even though other ministries and previous prime ministers did not have the same practice.

“I understand it can look strange . . . I’m not covering anything up,” Frederiksen said.

The slaughter of up to 17m mink last November swiftly descended into farce as it transpired the government did not have a legal basis for the killing; trucks shed thousands of mink on roads; and the rotting corpses had to be dug up after only a few weeks after they threatened drinking water supplies.

A commission is investigating mink-gate and is trying to recover the deleted text messages to determine just who in government knew there was a problem with the legality of the order. Opposition parties said yesterday that Frederiksen’s explanations left more questions than answers.

Frederiksen is standing strong, backed by disparate leftwing parties. But as with other scandals, she may find that the most dangerous part is not the actions she took or didn’t take but the aftermath and anything that looks like it could be a cover-up.

Yesterday’s meeting between French and British ministers in Paris failed to bring an end to the bilateral fishing rights dispute. The two sides can’t even agree on how many licences for French boats are in dispute. But they did at least concur on talking again next week. (More here)

Under Czech law, the president has the power to decide whom to give the first chance to form a new government, but the 77-year-old’s health problems — which required him to be hospitalised on October 10, the day after the election — have prevented him from doing so.

The Prague Central Military Hospital, where Zeman is being treated, said yesterday that his condition — details of which have not been made public — had improved enough for him to be moved to an ordinary hospital room, but did not make clear whether he was now well enough to work.

The uncertainty over Zeman’s condition has left Czech politics in limbo, and sparked calls for the launching of a constitutional procedure that would allow the president’s powers to be transferred to other officials if Zeman is deemed incapable of fulfilling his responsibilities. A group of medical experts is due to assess his condition today.

Last month’s election was won by Together, a three-party rightwing coalition led by Petr Fiala. Along with a second coalition of two smaller parties, Fiala’s bloc will control 108 of the 200 seats in the new parliament, which will meet for the first time on November 8, giving them the ability to oust Prime Minister Andrej Babis and his Ano party from power.

The two blocs on Tuesday said they had reached an agreement on what their governing agenda would be, as well as on how key government posts would be allocated.

However, how quickly they can turn their plans into action depends on Zeman, who before his hospitalisation said that he would give the head of the biggest single party, rather than the biggest coalition, the first chance at forming a government. That would mean giving the first shot to Babis. But, with no chance of building a majority, Babis has indicated that he is preparing for opposition.

“If you look at Zeman’s past as president, then there is no reason to believe that he would not try to do something unorthodox . . . but on the other hand he is ill so he may not be up to engaging in complicated constitutional play,” said Jiri Pehe, director of the New York University in Prague.

With a surge in Covid-19 cases and various economic problems needing to be addressed, Pehe said a period of prolonged political uncertainty would do the country no good.