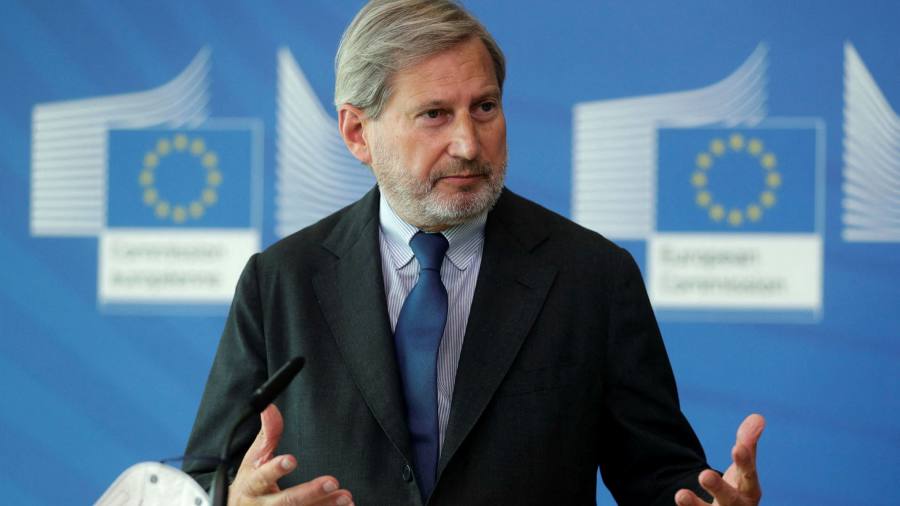 Stripping out certain categories of public debt from national budgets would damage transparency and overcomplicate EU rules on countries’ borrowing limits, a senior Brussels policymaker has warned amid a fierce debate in European capitals over how to overhaul the current regime.

Johannes Hahn, the EU’s human resources and budget commissioner, said he was opposed to carving out climate spending and other strategic expenditures from the EU’s public debt calculations, insisting that member states must focus on reducing their indebtedness.

“I am not supporting any ideas [to] exclude certain kinds of debts, qualifying them as good ones, sustainable ones, green ones etc. At the end of the day, debt is debt,” Hahn told the Financial Times, calling instead for member states to face regular “stress tests” of their public finances.

European Commission officials are working on bridging a rift between northern and southern member states as part of a consultation on overhauling the EU’s Stability and Growth Pact rules. The rules, which are designed to ensure fiscal discipline, were suspended during the pandemic. Euro area finance ministers are due to discuss the topic in Brussels on Monday.

French president Emmanuel Macron, who holds the EU’s rotating presidency, and Italian prime minister Mario Draghi last month argued that “key spending for the future” should be incentivised under a revised set of rules.

EU economics commissioner Paolo Gentiloni has also said he supports “renewed and reviewed” budget rules to incentivise green and digital spending. Executive vice-president Valdis Dombrovskis, who with Gentiloni is overseeing the consultation, has insisted that member states will still need to offer “credible” plans to cut their debt even if they get extra leeway for green investments.

In contrast, Hahn, who is Austria’s commissioner and a member of the centre-right European People’s party, reflects the traditional view in frugal northern states such as the Netherlands, Nordics, and Baltics. There, fiscal conservatives are wary of allowing swaths of public spending to be incentivised under a so-called “golden rule” principle.

Hahn, who is in charge of the EU’s human resources and its seven-year budget, signalled he was open to changes to the pact that would ensure a “country-specific, tailor-made road map” to public debt reduction. But he warned that countries should not assume that favourable borrowing costs would last forever.

“The commission has to be tough in monitoring, checking and taking remedial action in case the road map is not respected,” he said. “In terms of transparency, it is obvious that we should have a clear picture of the situation of each member state.”

Hahn’s stance is an early sign of the tussles between fiscally conservative commissioners and more reform-minded ones. Brussels aims to put forward its SGP reform proposals this summer.

The current rules do not permit states to routinely disregard broad categories of green or other strategic spending when assessing compliance with EU targets. Capitals and the commission are debating whether rigorous definitions can be found for public spending projects and categories that might benefit from more favourable treatment.

French officials say they want to incentivise growth-enhancing investment in strategic areas, such as the green and digital transitions.

Pascal Canfin, a French MEP from Macron’s En Marche party, said a compromise could involve placing a cap on the green spending exempt from debt and deficit calculations.

Canfin said an annual limit of 1 per cent of a country’s gross domestic product was a suitable figure to help plug the “green investment gap” needed to meet the EU’s ambitious target of net zero carbon emissions by 2050.

He said the commission should be allowed to select green spending projects submitted by member states that can be exempted from the SGP every year.

“We need a cap that is politically acceptable for all countries on what spending gets special treatment,” Canfin told the FT. “If we inject 1 per cent of GDP per year it makes a clear difference and can start a virtuous investment cycle.”