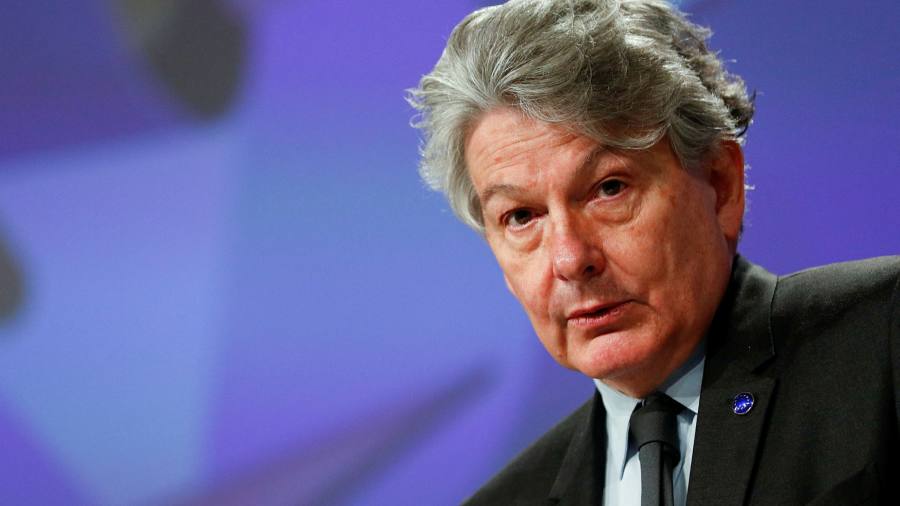 Brussels has complained that a senior US official is campaigning on behalf of Big Tech, days after the EU approved a common position on draft rules aimed at curbing the power of large American tech companies, fuelling a transatlantic tit-for-tat among senior officials.

Thierry Breton, the EU internal markets commissioner, accused US commerce secretary Gina Raimondo of lobbying on behalf of the sector after she said this month that new European rules were “disproportionately” targeting US companies.

Breton said he had already discussed these concerns with Raimondo and that he was “a little bit astonished” to learn that she was airing the same issues publicly.

He said: “This is not something that we do against anybody. We do it for our European fellow citizens and our companies. This is our duty.”

The commissioner said the chief executives of the world’s largest tech platforms, including Google and Facebook, had his “cell number” and could call him to air their concerns. He also said these companies took part in extensive discussions ahead of the EU’s draft rules and that they had plenty of time to “express their concerns”.

He said: “We could discuss. So we don’t need any extra lobbying.”

The EU commissioner’s comments come at a particularly awkward time for large online platforms in Brussels. Just this week the European Parliament agreed on a common position on the Digital Markets Act, a draft piece of legislation aimed at curbing the power of Big Tech.

The new rules are expected to ban anti-competitive behaviour by the large platforms, including any highlighting of their own products or services at the expense of rivals, and to force big platforms like Google and Facebook to share data with smaller rivals.

While the DMA was created to force so-called gatekeepers, such as Amazon, to ensure more equal terms on their online platforms, the Digital Services Act will seek to clarify the way large online companies should keep illegal content off their platforms.

The National Security Council, an arm of the White House, wrote to complain about the tone of recent comments about the EU’s flagship tech regulation. “We are particularly concerned about recent comments by the European Parliament rapporteur for the Digital Markets Act, Andreas Schwab, who suggested the DMA should unquestionably target only the five biggest US firms,” their complaint, dated June 9, said.

The commerce department said on Friday that while Raimondo supported the goals of the Digital Markets Act, it was longstanding practice for the US government to consult to ensure other jurisdiction’s laws did not discriminatorily target US firms.

“While we appreciate the assurances of our European colleagues about their non-discriminatory intentions, it is still unclear whether the current and proposed scoping requirements under the DMA will cover well-known tech platforms, for example, from China and Europe,” a spokesperson said.