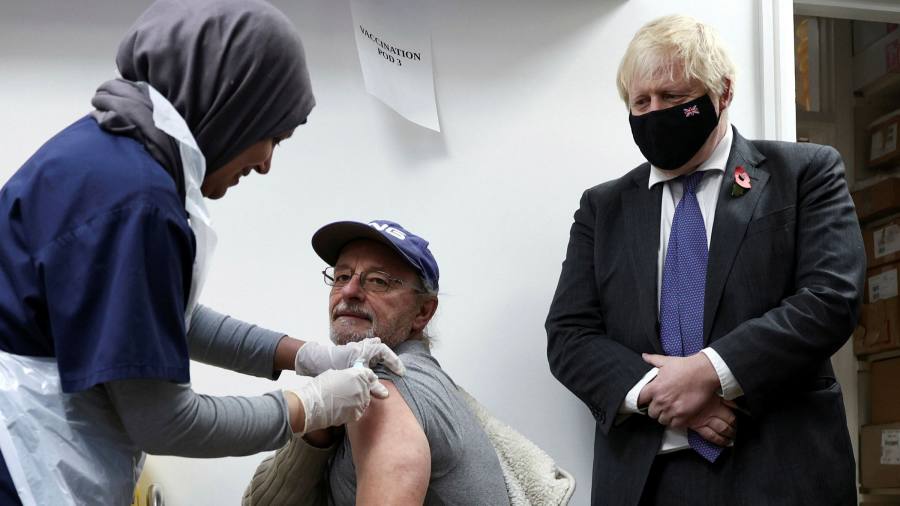 Boris Johnson has called on elderly and vulnerable Britons to come forward for Covid-19 booster shots, as he warned of “storm clouds” gathering over continental Europe after a fast-rising wave of coronavirus infections prompted several nations to reimpose restrictions.

“I’m looking at what’s happening overseas, and I’m simply saying to the British people . . . this is the moment to get your booster,” the UK prime minister said on Friday.

Some 370,000 booster shots were administered across the UK on Thursday, bringing the number of people who have received a third dose of a Covid-19 vaccine to more than 11.8m. About 63 per cent of people in the UK eligible for a booster shot — healthcare workers, the over-50s and those considered vulnerable — have received the jab.

Despite having had some of the highest infection rates in Europe for much of the autumn, Covid-19 infections, hospital admissions and deaths have fallen across the UK in recent weeks.

A total of 1,077,100 people were infected with Covid across the UK in the week ending November 6, down around 15 per cent on the week before, according to the Office for National Statistics infection survey.

However, since Thursday, daily cases have begun to edge up again. On Friday, 40,375 new Covid cases were recorded, up 19 per cent from the same day last week when around 34,000 people tested positive.

But the number of deaths within 28 days of a positive test in the week to November 12 dropped by nearly 9 per cent to 1,090.

“We’ve got some encouraging numbers in the sense that they’ve been drifting down for a while, but it’s not clear that that drift is going to continue,” Johnson said.

The prime minister has resisted calls from leaders in the health sector to implement “plan B” measures of compulsory mask-wearing in public spaces, work from home orders and vaccine passports to reduce infection rates and ease the pressure on hospitals in England.

But Johnson added: “I’m seeing the storm clouds gathering over parts of the European continent and I’ve got to be absolutely frank with people: we’ve been here before. We remember what happens when the wave starts rolling in.”

Covid case rates in Austria, Ireland, Belgium and the Netherlands outstrip those recorded in the UK. In Germany and Denmark, per capita caseloads are nearing UK levels and growing rapidly.

The Netherlands will impose a three-week partial lockdown from Saturday evening. Hospitality venues, supermarkets and non-essential shops will close early, home gatherings will be restricted to four people and home-working will be strongly encouraged, as part of a suite of measures announced by prime minister Mark Rutte.

The Austrian government plans to impose strict lockdown measures on all unvaccinated citizens from Monday. Germany’s public health authority, the Robert Koch Institute, called on Friday for capacity limits to be introduced for large events, and bars and nightclubs in Covid hotspots to be closed.

Dr Michael Head, senior research fellow in global health at Southampton university, argued that several EU nations were facing issues with patchy vaccine coverage as well as waning immunity which the UK began experiencing “a few months back” because of its faster primary vaccination rollout.

He added that rapidly implemented booster campaigns could help suppress infections rates. However, Head warned: “We are seeing that while vaccines do a lot of the heavy lifting when it comes to keeping Covid-19 under control, other interventions are also required to prevent case numbers rising.”