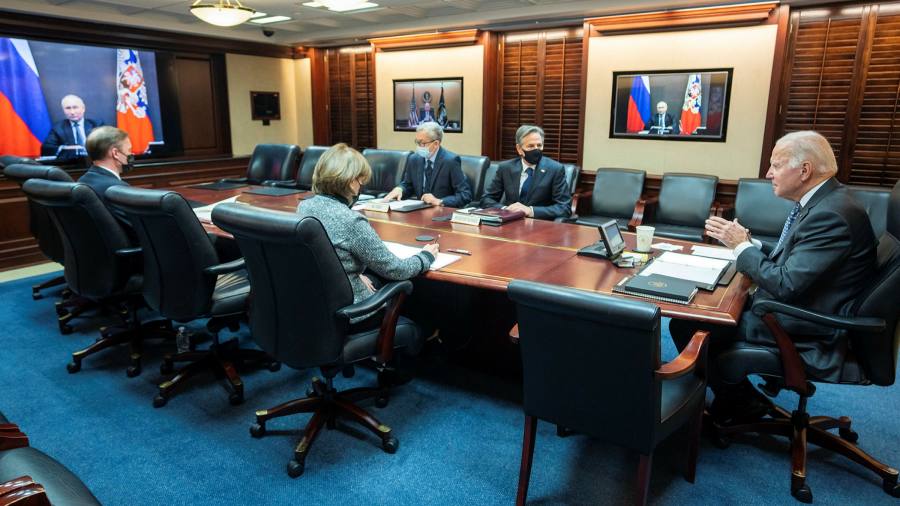 Joe Biden is to hold talks with leaders of eastern European Nato states who fear the US president is open to negotiate with Russia over its demand for the western military alliance to curb its expansion in the region.

Following a virtual meeting with Russian president Vladimir Putin on Tuesday, Biden said he planned “to discuss the future of Russia’s concerns relative to Nato writ large” and explore “whether or not we can work out any accommodation”.

Putin, who has overseen a large-scale military build-up on Russia’s border with Ukraine that US intelligence has said could be used for an invasion, has demanded that Nato rule out making Kyiv a member. The Russian president also wants the alliance to cease military deployments in eastern European member states bordering Russia.

“I hope I’m wrong but I smell ‘Munich’ here,” Marko Mihkelson, head of the foreign affairs committee of Estonia’s parliament, told the Financial Times in reference to the 1938 agreement in Europe to try to avoid conflict with Nazi Germany by ceding the Sudetenland.

“Starting talks under the guns [of Ukraine] about the future of Nato, or even more so about involving Russia in the European security architecture with a veto right — this is completely the wrong way and will ignite appetite for further aggression,” Mihkelson added.

Biden plans to convene a video conference with Nato members on the alliance’s eastern flank on Thursday, Latvia’s foreign minister Edgars Rinkevics said. The Putin call, the threat to Ukraine and the White House’s next steps are expected to be discussed.

Ukraine’s ambassador to the EU told the FT that Kyiv’s “red line” is that “Ukraine is a sovereign state and it is our business how we build our relations both with Nato, EU or individual states.”

“The main principle for us is that there are no words about Ukraine without Ukraine, so we need to be involved in any discussion with regard to the Ukrainian security situation,” said Vsevolod Chentsov. “Russians will have to accept it. There is no other way.”

One senior western intelligence official said Biden’s other comments “were quite forceful on deterrence.”

“Accommodation is a pretty heavy word . . . He’s not Neville Chamberlain, I don’t think he meant that,” the official said.

“I wouldn’t rush to the conclusion that the worst-case scenario from their political perspective is the one Washington intends to pursue,” the official added, referring to eastern Nato members.

White House deputy press secretary Karine Jean-Pierre told reporters on Wednesday following Biden’s comments that the principle of every country having a sovereign right to make its own security decisions “remains US policy today and will remain US policy in the future.”

“While everyone is prepared to engage in dialogue, there can be no concessions . . . in protecting our allies,” a Nato official told the FT. “We are not negotiating the right of countries to choose their own path.”

Mihkelson said that the move by the Biden administration to engage broadly with Russia was “surprising and concerns the interests of us, the countries on the eastern flank of Nato”.

Any such talks, which Mihkelson argued should include at least Poland and Ukraine, should only be concerned with “ensuring the territorial integrity and sovereignty of Ukraine and the withdrawal of the Russian military threat from Ukrainian borders”, the Estonian MP stressed.

Riho Terras, the former commander of Estonia’s defence forces and now a MEP, wrote on Twitter: “Putin has emerged a victor from the Biden call. It’s outrageous that Putin was invited to decide the fate of eastern Europe with the ‘big boys’. Biden has delivered what Putin wants on a silver plate and sat the wolf at the table.”