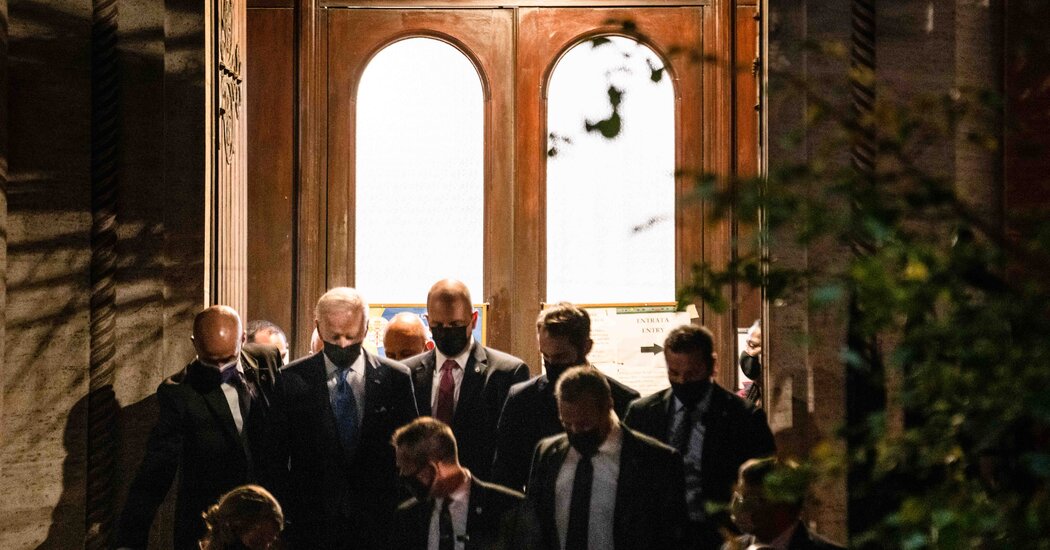 President Biden received communion on Saturday evening at St. Patrick’s Church in Rome, a day after he announced that Pope Francis had told him during their long private meeting at the Vatican that he should continue taking the sacrament.

Some conservative bishops in the United States have said the president, a Catholic and a regular churchgoer, should be denied communion because of his support for abortion rights.

Mr. Biden and his wife, Jill Biden, attended Mass at St. Patrick’s, an English-speaking church dedicated to the American Catholic community, after a day of high-level negotiations at the Group of 20 summit.

“It meant a lot to the American church in Rome that he made this special effort to be there to be present and to worship with us,” said the Rev. Steven J. Petroff, the church’s rector, who offered Mr. Biden communion.

Father Petroff had heard of Mr. Biden’s remarks about Francis telling him he was a “good Catholic” and that he should keep receiving communion. But that news, the priest said, changed nothing for him.

“If the pope had said nothing, I would have done nothing differently,” Father Petroff said. Still, he said, the pope’s remarks, as relayed by Mr. Biden, were “important and clarifying” and “reassuring.”

The Vatican had declined to confirm or deny Mr. Biden’s account, saying it was a private conversation.

Earlier this month, Nancy Pelosi also visited St. Patrick’s, near the American Embassy, but was forced to leave before taking communion because security officials determined that a violent protest nearby over a health pass constituted a threat.

Father Petroff said he would have given Ms. Pelosi communion and was proud to have offered it to Mr. Biden. He simply did what he was trained to do, he said, which was offer the eucharist, which he called a “gift to be shared,” to the president, who was in line with the few dozen other worshipers on Saturday evening.

“He was in line like everyone else,” Father Petroff said. “People in front of him and people behind him.”

At the end of Mass, Father Petroff acknowledged the attendance of Mr. Biden, who stood in a back pew with his wife. He welcomed him and thanked him — and said he prayed for him and for the work he did.

The parishioners applauded, he said.

As the Bidens left the church, Father Petroff joked to Mr. Biden, who often talks about his Irish heritage, that he had no choice but to visit a church named St. Patrick’s. The president, he said, joked back that he had Italian roots, too.