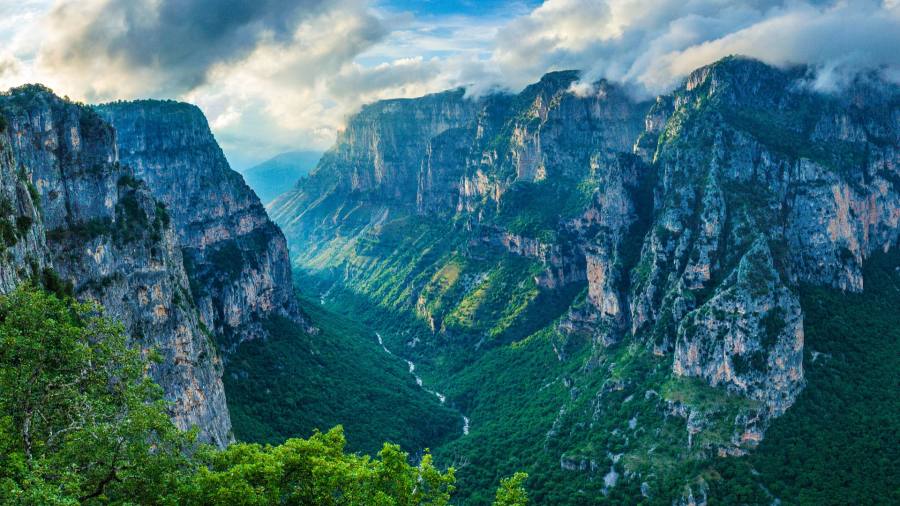 As the hot, dry, Mediterranean summer slides into autumn, we turn our backs on the sea, mountain-bound. From Thessaloniki, capital of central Macedonia, we skirt Mount Olympus, above which lightning rents holes through the baggy, sackcloth skies — not a good omen for our long-weekend walking trip. The heavens open, and the windscreen wipers swish for the duration of a three-hour drive along the deserted super-highway, the Egnatia Odos, westwards into the heartland of Epirus.

The EU-funded motorway is a feat of engineering with seventy six tunnels and more than a thousand bridges. Completed in 2014, it runs parallel, some of the way, to the older Via Egnatia, built by the Romans two centuries before the birth of Christ. In Greece, you never quite get used to these extraordinary juxtapositions of the ancient and contemporary.

Soon, we are transported across the great plains of Thessaly, the rolling wheat fields bumping up against the foothills of the Pindus Mountains. We pass billboards celebrating the fact that these hills are still home to brown bears, then beyond the gateway town of Metsovo, off the highway now, we finally push up into the Zagori, the name derived from Slavic words meaning the “place behind the mountains”. The sense of isolation grows as we wind up past waterfalls and ruined homesteads, around hairpin turns that look down on arched Ottoman bridges.

Aristi, one of the 46 villages that make up the Zagori, is wreathed in woodsmoke as we approach. The sound of sheep bells reverberates around the hillsides. In the main square are the obligatory giant plane trees beneath which all Greek mountain village life unfurls, and set around it are the school, the church and crucially, the taverna, En Aristi. There, the owner and his family wait the tables at weekends, proffering shots of tsipouro and the herby pitte, or pies, that are a taster of the region’s memorable comfort food.

A few steps away, Aristi Mountain Resort offers the cosiest hotel option in the Zagori: rooms with wood-burning stoves or open hearths spread across a series of traditional stone houses, with a spa and indoor pool. It will be a base for my three friends and me as we explore the surrounding peaks and canyons on foot. There’s a storybook quality to the place; when you step out of your own rosemary-fringed front door into an autumn morning it is like stepping out through the back of a wardrobe into a dreamscape.

There’s a storybook quality to the place; like stepping out through the back of a wardrobe into a dreamscape

Rather than take a guide, we are relying on maps to plot our own routes, and on the first afternoon we follow a road of white limestone that forges down through the village and out on to the wild hillside. It leads to a single track bridge that crosses the crystalline waters of the Voidomatis. You can follow this path for several hours; past the frescoed 17th-century Spiliotissa monastery, stone age caves, and a ruined chapel. We skirt white riverine beaches all the way to the graceful, Ottoman-era arched bridge at Kleidonia. In winter, views over the bright water open up as the trees shed their leaves, revealing the snow settled on the serrated summit of Astraka.

It is still too early for snow during our visit, but on the morning following our arrival the peaks reveal themselves slowly and seductively, through the veils of mist; a sensational backdrop to our breakfast table. By the second espresso, sunbeams pour like honey into the blackest folds of the valley. On the first full day of our long weekend, we decide to throw ourselves in at the deep end and walk the Vikos Gorge, often billed as the world’s deepest, relative to its width.

The ancient cobbled kalderimi, or mule path, zigzags down from the village of Monodendri to the valley floor, past the imposing mansions of former merchants. Down in the bottom of the gorge we sidestep banks of scree and shale, following the riverbed, bone-dry despite recent rains. Beneath ranks of towering planes, limestone boulders, polished smooth by the seasonal torrents, are strewn around as though tossed by the giants of classical mythology. We lose track of the cairns we are following and instead are lured by the sound of water, echoing through the steep-walled canyon.

Eventually we come upon the springs of Voidomatis, where the water is always icy, even in high summer. The mineral blue-green pools are pure enough to drink and certainly to swim in, which we do, warming ourselves afterwards in the sun that pours through the branches of the deciduous forests that fringe the lowest part of the gorge. Within this cool, green, silent world, lichen hang like bracelets from the branches of the hornbeam and the moss underfoot creates a bouncy, sometimes slippery tread.

High above us is the 18th-century church of Theotokos Koimesis, abandoned though its frescoes are intact, and entered (we will discover later) via a low door that forces you to bend and humble yourself before God. In October, the surrounding plateau abounds with wild flowers. The wild cyclamen, which seem to bloom miraculously from bare rock, were prized for their purgative powers by the 18th-century shaman doctors of Vikos, the Vikogiatroi. Much of their knowledge of the plants of this unique ecosystem is sadly long lost, but the enthusiastic drinking of ironwort tea as a cure-all is still very much part of the culture.

The shaman-doctors, like the bridge builders and secretive stonemasons of the region, formed self-protective guilds, and communicated in a private language, to prevent the secrets of their trades from being stolen. Zagori’s isolation worked in its favour during the time of the Ottoman sultans who allowed the region a degree of autonomy. It prospered on trade out of Metsovo along the Silk Road to Thessaly, Constantinople, the Black Sea and beyond. Napoleon’s fleet at Trafalgar even wore cloaks woven from the wool of Zagori sheep, according to local guide, Joshua Barley, of travel company The Slow Cyclist, who is a mine of such information.

From the springs, we follow the signposted path that leads us out of the Vikos Gorge, pushing on to arrive at the small village of Mikro Papingo. On the terrace of the Pinocchio café we sit and enjoy cold beers, bread and sheep cheese, looking back in exhausted and happy contemplation as the sun sinks over the gorge. We have covered about 14km from Monodendri, and close to 1,000 metres of ascent.

From our terrace vantage point, we plan hikes for the coming days that will join the dots between some of the other beautiful villages of the region: up to Lake Drakolimni, on a high ridge more than 2,000 metres above sea level, or down the valley to the old merchant’s bridge at Missios, or perhaps to tackle the more than 1,000 cobbled stairs that climb the mountainside to the village of Vradeto, the highest in the region. This is an alternative Greece, eye-opening and haunting in autumn and winter, a world apart from the Mediterranean seaboard, the sun-baked, sociable beaches.

Details: Aristi Mountain Resort has double rooms from about €140 per night. The Slow Cyclist offers tailor-made journeys on e-bikes and on foot in the Zagori; classicist Rupert Smith (theeviaschool.com) guides trips through the area on foot and by car. For rafting, biking and other guided mountain adventures, contact Hellas Trekking

Naxos and Amorgos Far less developed than neighbouring Santorini and Mykonos, these two Cycladic islands are ideal for walking. On Foot Holidays arranges tailor-made self-guided trips, travelling by ferry between the islands. Highlights include the temple of Sangri on Naxos, thought to be from the 6th century BC, and the monastery of Chozoviotiza on Amorgos, clinging to the cliffside above the Aegean. From £655 per person per week; trips run between April and October; onfootholidays.co.uk

Evia  In the south of the island of Evia, Exodus runs guided winter hiking trips along the coastline and to remote mountain villages, with visits to a Roman quarry and Byzantine churches and an ascent of Mount Kliosi. The walking on the week-long trip is leisurely — typically covering about six miles per day before returning to the same simple seaside hotel. From £1,149 per person, next departure on November 28; private guided trips can also be arranged; exodus.co.uk

Mount Olympus The home of the gods, the summit of Mount Olympus itself, is the objective on a guided group hiking trip from KE Adventure. The week-long trip warms up among the sandstone towers of Meteora, with time to visit two of the mountain-top “floating” monasteries, before moving on to tackle the 2,917-metre Olympus. Accommodation is in guesthouses and mountain refuges; trips are scheduled for June, September and October next year, from £1,145 per person; keadventure.com