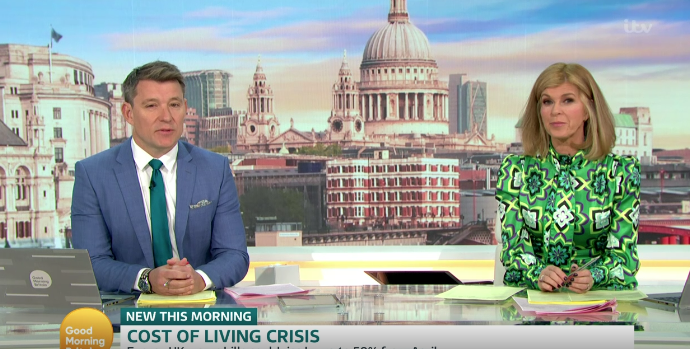 BEN Shephard apologised to Good Morning Britain viewers today after the show was hit by an awkward technical issue.

He accused Kate of spilling her early morning coffee over it causing it to malfunction – something she admitted to having done elsewhere.

Ahead of an ad break, Charlotte Hawkins made a dash into the editing suite to see if she could solve the problem.

It seemed to work too as when viewers returned to the studio they were told everything was back to normal.

Ben explained that a piece of plastic casing had gone skew-whiff on the Live button causing havoc.

Later in the show Kate explained how her energy bills have risen 400 percent since her husband Derek returned home from hospital following coronavirus battle.

With provider prices surging, Kate said she was doing seven to eight washes followed by tumble drying every day as Derek is cared for round the clock.

Earlier this week Kate, 54, admitted “we don’t know what the New Year will bring”.

Kate – who was given an MBE in the New Year honours –  said on GMB: “He’s doing alright. He is phenomenally fatigued at the moment and very weak.

“After the trip to the panto he was then not out of bed afterwards, but I thought it was worth it and I know he did too because it was a special moment to be there holding hands with the children doing something normal.

“But it took everything out of him. We don’t know what the New Year will bring.

“He was there looking smiley and present. The speech isn’t there, but you can see he’s aware something special is happening and he’s part of it.

“The morning of the panto I asked ‘you’re incredibly tired are you sure you still want to do this?’ and he said ‘yes, yes’.”

Derek is phenomenally fatigued and very weak, we don’t know what the New Year will bring, admits Kate Garraway