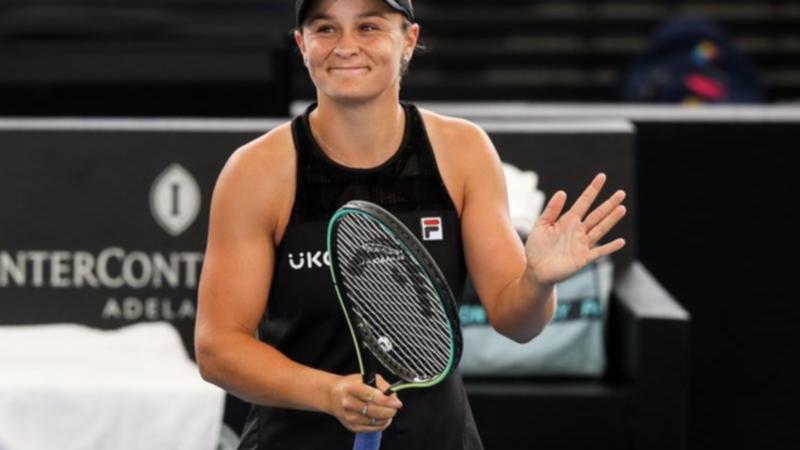 Ash Barty is already looking sharp – but she knows the testing start to her 2022 campaign will only get more demanding when she faces “an incredible athlete” who’s also become her pal.

The Australian maestro can’t speak highly enough of Poland’s Iga Swiatek, who she’s got to know well as they’ve spent so much time together as practice partners.

Barty reckons she loves how she gets on with the 20-year-old who succeeded her as French Open champion in 2020 and says the pair of them enjoy a similar outlook on life away from tennis.

Yet their growing closeness has also allowed both players to study each other’s special games in detail – and that promises a humdinger of a semi-final at the Adelaide International on Saturday night.

“Iga’s an incredible athlete. She’s a smart girl. She’s going to very much figure out her way and her path, what works for her,” said Barty, who’s already negotiated two tough hurdles at Memorial Drive in the shape of teenage star Coco Gauff and former Australian Open champ Sofia Kenin.

“I love the communication that I have with Iga. I feel like when we practise, we’re really open.

“More of the communication is about life in general and what’s happening off the tennis court. We share similar interests.

“There’s certainly no advice from me that needs to be given to her for her to improve.”

Swiatek, for her part, can’t wait for another crack at the world No.1, having been outplayed by Barty last May on clay in Madrid in a much-hyped clash between the 2019 Roland Garros champion and her teenage successor.

But she’s promised the Wimbledon champion will be facing a very different athlete this time around, reckoning Barty will be the one under pressure amid a great atmosphere she can’t wait to experience.

“Ash is a great player, I have respect for her,” said Swiatek.

“In Madrid, I had more question marks. I was pretty nervous and not confident because of the altitude. Here I don’t have that factor. I know I can play really good on these courts. Also the weather conditions, I love them.

“It’s always a little bit more pressure on her. Hopefully I’m going to be able to use that.

“I can really play free. That’s the best thing,” added the Pole, who outlasted the 2012 and 2013 Australian Open champion Victoria Azarenka in the quarters.

Barty, who’s been serving with metronomic excellence, knows this will be another step up in her increasingly confident-looking Australian Open preparations.

“It’s easy to forget that Iga’s still relatively new to the tour in a sense. It’s only been a couple of years,” said the Queenslander.

“But she’s going to be a very consistent player over a long period of time without a doubt in my mind.”