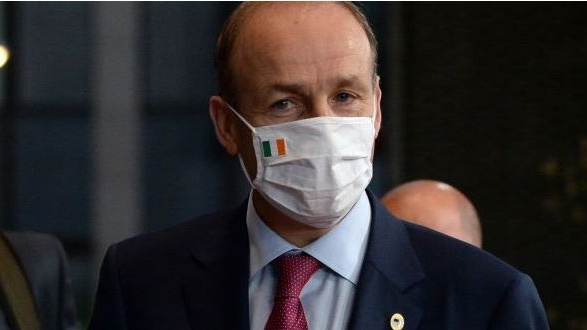 May 14th, 2020 was not a particularly important day in Ireland’s Covid pandemic, but it was at a remarkable time. The country was on the cusp of reopening after being hit with the first wave of Covid infection. The population had been in two months of unprecedented lockdown, the State had stepped in with extraordinary spending measures and the pandemic had played a large part in forcing together Fianna Fáil and Fine Gael, who were then in negotiations to form the next government.

The virus had ripped through nursing homes, claiming almost 1,000 lives, and about 1,500 people had died overall. Between February 29th, when coronavirus infection was first confirmed in the Republic, and May 14th, there had been 23,827 confirmed cases. Almost exactly the same as the number of new cases reported on Thursday, 23,817.

It may not feel like it, but those numbers show there is a gulf between the pandemic then and now. The virus and how it is managed has changed hugely over time. That change is ongoing, and even amid the bleak picture of curtailed services, cold classrooms and continuing hospitalisations, there are grounds for optimism.

Most importantly, it seems that a combination of vaccines, voluntary behavioural change, public health restrictions and “mildness” of Omicron may be curbing the worst outcomes associated with Covid infection – ie ICU admission and death. There are fewer people in ICU than before Christmas, and the number of people receiving oxygen therapy outside ICU – a key measure of how much pressure it is under – is relatively low.

In stark contrast with this time last year, which was peppered by emergency meetings and saw the return to schools disintegrate on impact, one high-powered meeting this week was described by an attendee as “nearly totally uneventful”. It’s said Nphet’s meeting was edging towards optimistic on Thursday – that while the data is threadbare (due to Christmas reporting gaps), it is encouraging. It seems the disease, for whatever reason, did not penetrate into older cohorts and more vulnerable populations. Even though significant concern remains over the sheer number of infections, rather than new restrictions, minds are turning to planning for exiting this phase. Schools have resumed. Colleges will resume in-person tuition as planned.

It’s a markedly less depressing vista than last January. While there are clear and present dangers for healthcare provision across the system, there are signs that the current wave of infection will be surfed, rather than it crashing over us.

This winter was always going to prove the acid test for the Government’s 2021 strategy, which was to vaccinate, reopen slowly and move past controlling Covid with lockdowns. An unspoken element was that vaccines meant a level of infection and illness would be tolerated as it wouldn’t endanger hospitals or kill (as many) people.

Tolerating Covid as other diseases meant moving away from harsh measures to control the spread of disease, and decommissioning systems of pandemic management such as Nphet and the testing system. All this was being planned for, and had to be paused, due to a nasty Delta wave that forced a reversal in the last steps of reopening, and the dizzying impact of Omicron. But that strategy is still basically intact. It may be bloodied and bruised, heavily bandaged, perhaps even missing a limb or two, but it is more or less still the plan.

If current trends hold, and the worst is avoided, it will be a qualified success for the Government’s winter plan. There will be little thanks for it: close contact rules mean difficult, disrupted weeks are ahead. The traditional tensions over the pace of reopening will emerge, and there is every chance that numbers could stall or surge again as behaviours change and activities resume.

Managing the vagaries of the disease as it waxes and wanes, and different variants emerge, will continue to challenge. Balancing the health of society will remain a confounding public policy problem. Yet more problematic variants may emerge. But if the Government can point to a winter without full-scale lockdowns or severe mortality, it will mark another meaningful change in the pandemic.