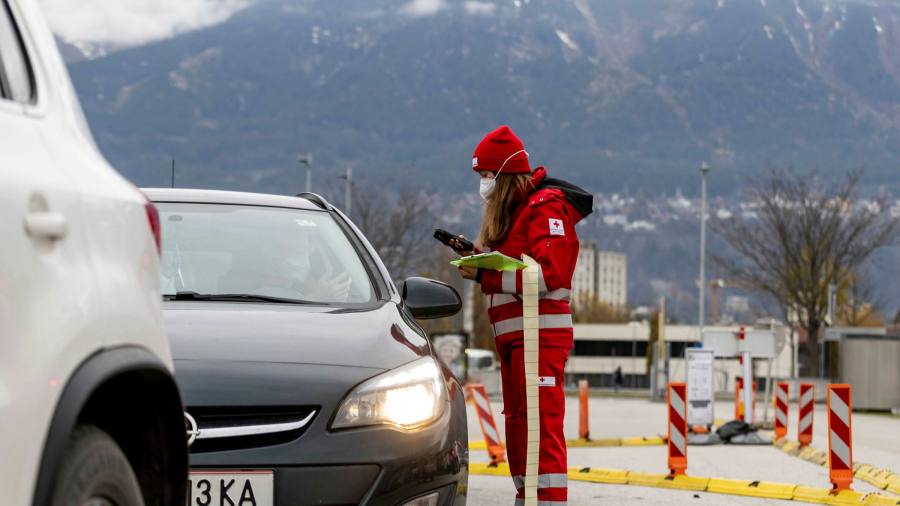 Austria is to impose a strict lockdown on the unvaccinated as it battles soaring rates of Covid-19 infection, in one of the most contentious measures in Europe to try to contain the pandemic.

Speaking at a press conference in the state of Tyrol on Friday, Chancellor Alexander Schallenberg said a nationwide lockdown for those who had not been jabbed would apply from Monday.

Austrians who have so far held out against being inoculated could expect Christmas to be “uncomfortable”, he told reporters earlier.

The measures were needed to protect the rights of those who had been vaccinated or recovered from the virus. “I don’t see why two-thirds of the population should lose their freedom because another third hesitates,” Schallenberg said.

Unvaccinated people have already been banned from the country’s restaurants, bars and entertainment venues.

The government has yet to reveal details, but officials in the chancellery say measures would almost certainly mirror the harsh lockdown restrictions seen last in Austria during the autumn last year and spring.

The lockdown for the unvaccinated . . . is unconstitutional, inhuman, harassing, completely illogical and not based on any evidence

If so, unvaccinated people will be ordered to leave their homes only once a day for a short period for “essential” reasons, such as buying food.

Schallenberg said further measures were also under consideration, such as a mandatory vaccination requirement for employees in certain roles or workplaces.

Some 33.6 per cent of Austrians have yet to take a first dose of a coronavirus vaccine — one of the lowest rates in the EU — public health data show.

Austria this week recorded its highest infection numbers of the entire pandemic, with a rolling seven-day average of 9,593 daily infections reached on Thursday. The previous high, almost exactly one year ago, was 7,464.

Germany on Friday added Austria to its list of “high risk” countries, alongside Romania, Croatia, Latvia, the UK, US and others, caretaker health minister Jens Spahn said. Under that classification, anyone entering Germany from Austria who has not been vaccinated or recovered from the virus must quarantine for 10 days.

Schallenberg’s announcement sparked a fierce backlash, reinforcing concerns that vaccination is set to become one of the main fronts between Europe’s political mainstream and rightwing populism.

Herbert Kickl, leader of Austria’s far-right Freedom Party — which won a quarter of votes in the 2019 federal elections — accused the government of “corona fascism” and said that “all forms of resistance . . . are now needed”.

“The lockdown for the unvaccinated . . . is unconstitutional, inhuman, harassing, completely illogical and not based on any evidence . . . With this step, Schallenberg and Co make their totalitarian attitude clear to everyone,” Kickl wrote in a media statement.

The moves come as authorities in Germany proposed tougher coronavirus curbs as the seven-day incidence rate — which reached 263 people per 100,000 on Friday — rose to a historic high for the fifth consecutive day.

Spahn called for access to public events to be restricted to the vaccinated or recovered and requiring them to be tested before entry. At present people who have simply been tested can also attend.

“We have to do everything we can to break this dynamic,” he said at a press conference on Friday. “If nothing happens, the incidence rates will continue to double every two weeks. We have too high a number of infections and at the same time the vaccination rate is still too low.”

The Robert Koch Institute, Germany’s main public health authority, on Friday called for a cut in the numbers allowed into large events or for them to be cancelled, and for bars and clubs in areas with high incidence rates to be closed.