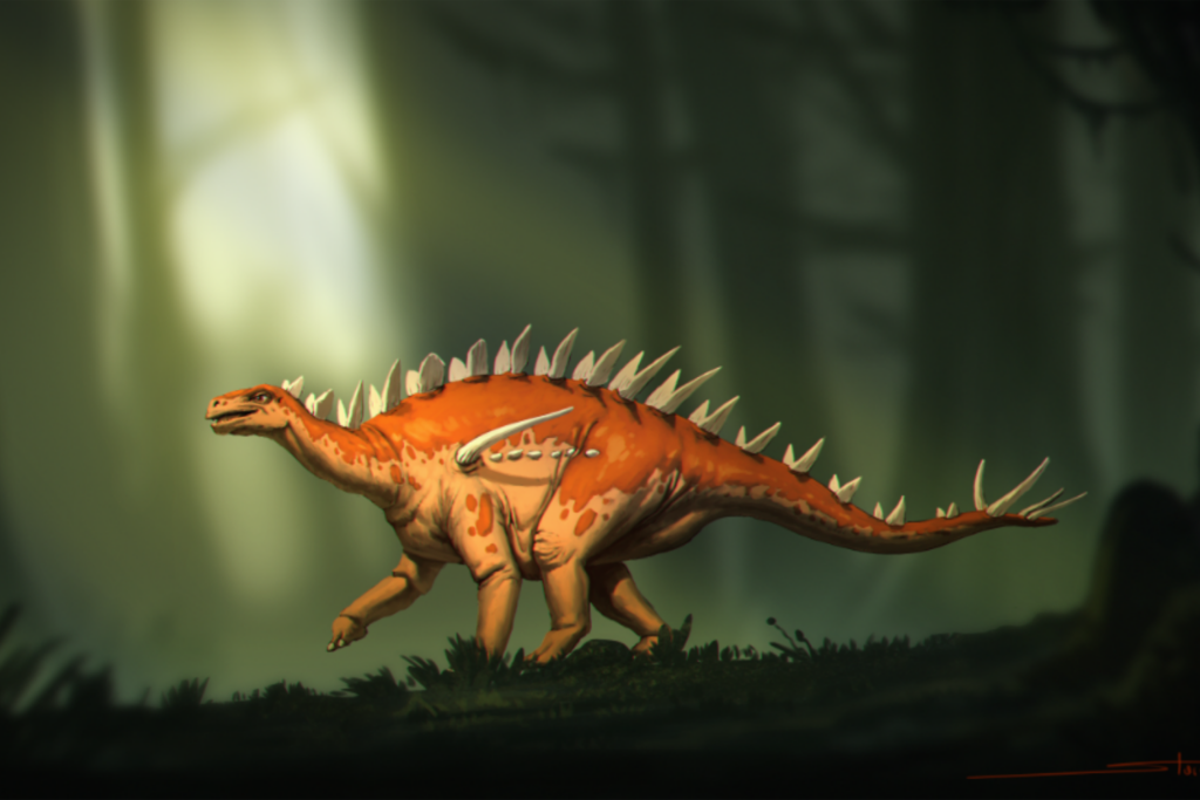 Scientists have discovered a new species of stegosaur that is the most ancient of the group of armoured herbivorous dinosaurs unearthed in Asia, and could be the oldest in the world.

The previously unknown species, Bashanosaurus primitivus, roamed the planet about 168 million years ago, and its new fossil sheds more light on the origin and evolution of stegosaurs – one of the most easily recognisable types of dinosaurs with their huge back plates, long tail spikes and tiny head.

The relatively small but “fearsome-looking” stegosaur measured about 2.8m (9 ft) from nose to tail, but researchers, including those from Zigong Dinosaur Museum in China, said they are unsure if the remains are those of an adult or juvenile.

Remains of the dinosaur, described in the Journal of Vertebrate Paleontology, included bones from the back, shoulder, thigh, feet, and ribs, as well as several armour plates.

Scientists dated the fossil to the Bajocian stage of the Middle Jurassic period – much earlier than most known stegosaurs – and suggested that this clade of dinosaurs may have originated from Asia.

“Our analysis of the family tree indicates that it is one of the earliest-diverging stegosaurs along with the Chongqing Lizard (Chungkingosaurus) and Huayangosaurus. These were all unearthed from the Middle to Late Jurassic Shaximiao Formation in China, suggesting that stegosaurs might have originated in Asia,” study co-author Dai Hui from Chongqing Bureau of Geological and Mineral Resource Exploration and Development, said in a statement.

Researchers said this dinosaur species had a smaller and less developed shoulder blade, narrower and thicker bases to its armour plates, as well as other features that are different from all other Middle Jurassic stegosaurs discovered so far.

However, they added, it also has similarities with some of the first armored dinosaurs that are over 20 million years older.

While stegosaur species like Huayangosaurus – one of the most primitive of the kind – as well as Gigantspinosaurus, notable for its enormous shoulder spines, have been widely studied, researchers said the fragmentary fossil material has hindered attempts to understand how this clade of dinosaurs evolved and how each species relates to one another.

Bashanosaurus primitivus, they say, has several primitive features that are similar to the earliest stegosaurs like Huayangosaurus and Gigantspinosaurus and other similar early-branching armored dinosaurs.

These features include longer tail vertebrae, a shoulder blade that is narrower and flares out, and features of the back vertebrae, the study noted.

Some unique traits of the new dinosaur are that its point at the end of the shoulder blade is small and less well developed than in other stegosaurs, and the bases of its armour plates curve outwards and are thicker than the plates on the backs of its later relatives.

“All these features are clues to the stegosaurs’ place on the dinosaur family tree. Bashanosaurus can be distinguished from other Middle Jurassic stegosaurs, and clearly represents a new species,” Dr Hui said.

“The discovery of this stegosaur from the Middle Jurassic of China adds to an increasing body of evidence that the group evolved in the early Middle Jurassic, or perhaps even in the Early Jurassic, and as such represent some of the earliest known bird-hipped dinosaurs,” Susannah Maidment, another co-author of the study from London’s Natural History Museum, added.