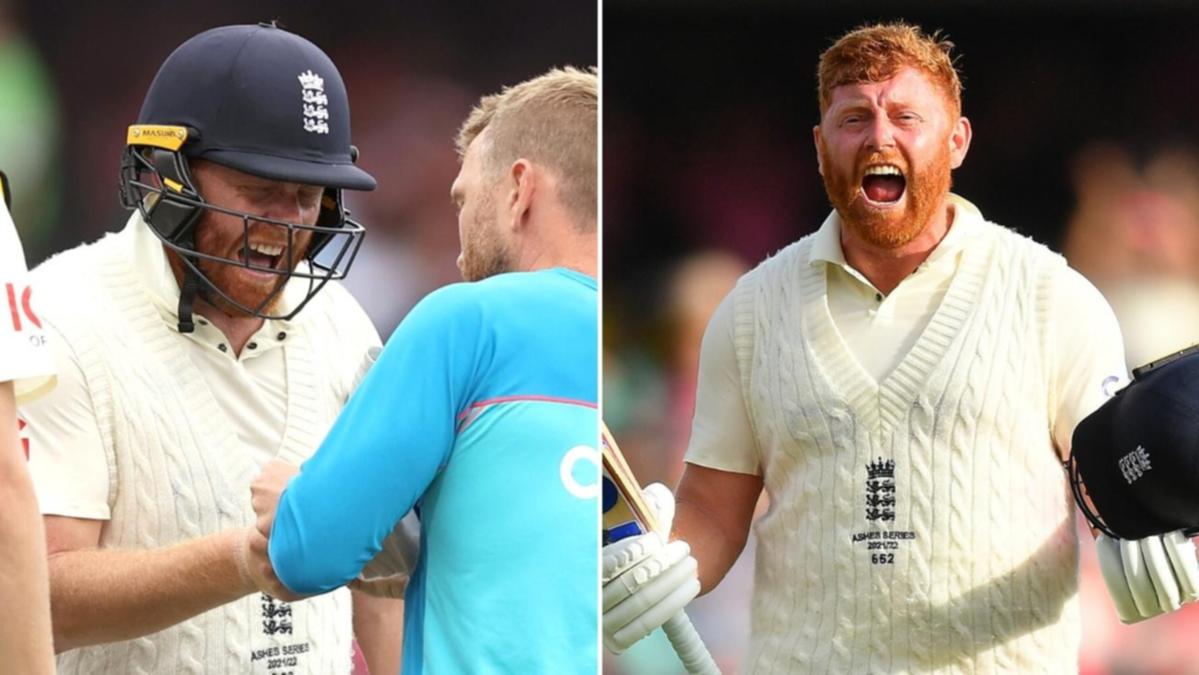 Jonny Bairstow and Ben Stokes pushed through the pain barrier as England fought back at the SCG, reaching 7-258 at stumps on day three of the fourth Test.

Bairstow’s unbeaten 103 and Stokes’ 66, both scored under obvious duress, lifted the tourists to their highest first-innings total of this Ashes series.

It came too late to help reclaim the urn after lopsided losses in Brisbane, Adelaide and Melbourne handed Australia a 3-0 lead in the five-Test series.

And it is unlikely to help snatch a shock victory in the rain-marred clash in Sydney, where the hosts hold a 158-run lead.

But it was enough to shepherd England beyond the follow-on mark, which appeared a long shot after they lost 3-0 while crashing to 4-36 at lunch.

And Bairstow’s euphoric celebration of England’s first century of the series, registered when he slashed a wide ball from Pat Cummins in the day’s final over, underlined that at least he is up for a fight.

Bairstow’s counter-punch came after he copped a graphic blow to the thumb, which bent back after being struck by a delivery from Cummins.

Bairstow immediately called for assistance, but batted on.

Stokes, undone by Nathan Lyon after he and Bairstow attacked the offspinner, was clearly bothered by the side injury he suffered while bowling on day two.

The talismanic allrounder, who shared a 128-run stand with Bairstow, scored the single that broke a staggering 70-ball stretch that featured three wickets and zero runs.

The vice-captain was on nine when he offered a return catch to Cummins that was put down, while he enjoyed an even more stunning slice of luck on 16 after shouldering arms to Cameron Green.

Green’s delivery clipped off stump, only for the bails to somehow remain in place – as you can watch in the video at the top of the page.

Stokes was given out lbw by umpire Paul Reiffel amid the chaos, but successfully reviewed the verdict, laughing as the replay revealed the remarkable series of events.

Stokes was also hit by on the gloves, as were Zak Crawley and Dawid Malan on a pitch that prompted several balls to spit up.

Fans kicked out after Stokes stoush

Stokes and Bairstow’s successful middle session at the SCG was soured when the batsmen were allegedly abused by a punter as they reached the dressing room.

Three fans were reportedly evicted by security after shouting about the players’ weight.

Stokes and Bairstow stopped to listen, with the former watching on as the latter slammed one fan who shouted abuse and walked away.

“Weak as p***,” Bairstow could be heard saying.

Watch the situation unfold in the video below

Scott Boland has been cleared to continue bowling after a painful tumble on the SCG pitch.

Boland stumbled while delivering the final ball of the second session on day three of the fourth Ashes Test.

The Victorian, who enjoyed a dream man-of-the-match debut at the MCG, was in much discomfort after the incident.

The fast bowler grabbed his right side after hitting the deck as teammates and England batter Jonny Bairstow checked on his welfare.

Boland left the venue to have a scan after the mishap.

But the second-gamer quickly returned to the SCG and was back in the nets, with medicos confident there is no damage.

Earlier, Boland claimed the prized scalp of Joe Root to extend a remarkable start to his Test career.

Boland had figures of 2-0 from four overs at lunch in Sydney, while he snared second-innings figures of 6-7 to help Australia retain the urn with victory in the Boxing Day Test.

Haseeb Hameed’s miserable Ashes run has continued at the SCG with the out-of-form opener at risk of setting an unwanted record this summer.

England’s batting woes have been well documented in this series, with veteran paceman Stuart Broad saying his side’s low first-innings totals were the key to miserable losses in Brisbane, Adelaide and Melbourne.

But few have struggled like Hameed, who was dropped on two during Mitchell Starc’s second over on Friday.

The reprieve cost four runs, with Hameed clean bowled for six in Starc’s next over by a delivery that hit the top of middle stump.

David Warner’s ineffectual 2019 Ashes tour, when he managed 95 runs across 10 innings, is the lowest ever by an opener in a five-Test series.

If Hameed is retained in England’s XI for the Hobart series finale and continues to extend a recent run of single-figure scores, he could set a lower bar than Warner.