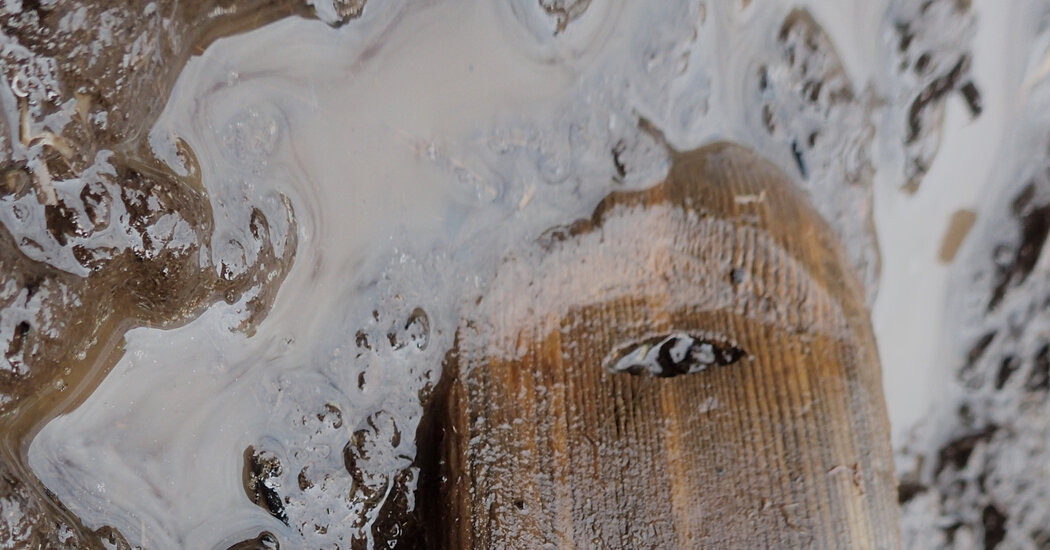 For the past few centuries, the Yup’ik peoples of Alaska have told gruesome tales of a massacre that occurred during the Bow and Arrow War Days, a series of long and often brutal battles across the Bering Sea coast and the Yukon. According to one account, the carnage started when one village sent a war party to raid another. But the residents had been tipped off and set an ambush, wiping out the marauders. The victors then attacked the undefended town, torching it and slaughtering its inhabitants. No one was spared.

For the last 12 years, Rick Knecht has led an excavation at a site called Nunalleq, about 400 miles west of Anchorage. “When we began, the hope was to learn something about Yup’ik prehistory by digging in an average village,” said Dr. Knecht, an archaeologist at the University of Aberdeen in Scotland. “Little did we know that we were digging in something approaching the Yup’ik equivalent of Troy.”

Their most astonishing discovery was the charred remnants of a large communal sod house. The ground was black and clayey and riddled with hundreds of slate arrow points, as if from a prehistoric drive-by shooting. In all, the researchers and native Yup’ik people who live in the area unearthed more than 100,000 well-preserved artifacts, as well as the singed carrion of two dogs and the scattered bones of at least 28 people, almost all women, children and elders. Several of them had evidently been dragged out of the house, bound with grass rope and killed — some beheaded. “It is a complex murder scene,” Dr. Knecht said. “It is also a rare and detailed archaeological example of Indigenous warfare.”

Until recently, the site had been deepfrozen in the subsoil known as permafrost. As global temperatures gather pace, permafrost and glaciers are thawing and eroding rapidly across vast areas of Earth, releasing many of the objects that they had absorbed and revealing aspects of life in a once inaccessible past.

“The circumpolar world is, or was, full of miraculously preserved sites like Nunalleq,” Dr. Knecht said. “They offer a window into the unexpectedly rich lives of prehistoric hunters and foragers like no other.”

Glacial archaeology is a relatively new discipline. The ice was literally broken during the summer of 1991 when German hikers in the Ötztal Alps spotted a tea-colored corpse half-embedded on the Italian side of the border with Austria. Initially mistaken for a modern-day mountaineer killed in a climbing accident, Ötzi the Iceman, as he came to be called, was shown through carbon-dating to have died about 5,300 years ago.

A short, comprehensively tattooed man in his mid-40s, Ötzi wore a bearskin cap, several layers of clothing made of goat and deer hides, and bearskin-soled shoes stuffed with grass to keep his feet warm. The Iceman’s survival gear included a longbow of yew, a quiver of arrows, a copper ax and a kind of crude first-aid kit full of plants with powerful pharmacological properties. A chest X-ray and a CT scan showed a flint arrowhead buried deep in Ötzi’s left shoulder, suggesting that he may have bled to death. His killing is humankind’s oldest unsolved cold case.

Six years later, in the Yukon’s snow fields, hunting tools dating back thousands of years appeared from the melting ice. Soon, similar finds were reported in Western Canada, the Rockies and the Swiss Alps.

In 2006, a long, hot autumn in Norway resulted in an explosion of discoveries in the snowbound Jotunheimen mountains, home to the Jötnar, the rock and frost giants of Norse mythology. Of all the dislodged detritus, the most intriguing was a 3,400-year-old proto-Oxford most likely fashioned out of reindeer hide.

Here are more fascinating tales you can’t help but read all the way to the end.

The discovery of the Bronze Age shoe signified the beginning of glacial surveying in the peaks of Innlandet County, where the state-funded Glacier Archaeology Program was started in 2011. Outside of the Yukon, it is the only permanent rescue project for discoveries in ice.

Glacial archaeology differs from its lowland cousin in critical ways. G.A.P. researchers usually conduct fieldwork only within a short time frame from mid-August to mid-September, between the thaw of old snow and the arrival of new. “If we start too early, much of the snow from the previous winter will still cover the old ice and lessen the chance of making discoveries,” said Lars Holger Pilo, co-director of the Glacier Archaeology Program. “Starting too late is also hazardous. We might get early winter snow, and the field season could be over before we begin.” Glacial discoveries tend to be limited to what archaeologists can glean on the previously ice-locked ground.

When the program started, the finds were mainly Iron Age and medieval, from 500 to 1,500 years ago. But as the melting widens, ever older periods of history are being exposed. “We have now melted back to the Stone Age in some places, with pieces as old as six millenniums,” Dr. Pilo said. “We are speeding back in time.”

To date, the Glacier Archaeology Program has recovered about 3,500 artifacts, many preserved in extraordinary delicacy. Norway has more than half of the prehistoric and medieval finds from the ice globally. A freshly unfrozen alpine pass at Lendbreen — in use from about 600 to 1,700 years ago — yielded evidence of the tradespeople who traversed it: horseshoes, horse dung, a rudimentary ski and even a box filled with beeswax.

Over the last decade, the relics melting out of the Alps have included the mummified remains of a Swiss couple missing since 1942 and the wreckage of an American military plane that crash-landed during turbulent weather in 1946. In Russia, scientists have regenerated reproductive tissue from unripe fruits of a narrow-leafed campion freeze-dried under the tundra for 32,000 years. A farsighted arctic ground squirrel had stored the fruit in its burrow.

Spectacular glacial finds invariably involve luck, as Craig Lee, an archaeologist at the Institute of Arctic and Alpine Research, can attest. Fourteen years ago, in the mountain ice outside Yellowstone National Park, he spotted the foreshaft of a throwing spear called an atlatl dart, carved from a birch sapling 10,300 years ago. The primitive hunting weapon is the earliest organic artifact ever to be retrieved from an ice patch.

“In the Yukon, ice patch discoveries have given us new insights into the pre-European tradition of copper-working by Indigenous peoples,” said William Taylor, an archaeologist at the University of Colorado Museum of Natural History in Boulder. “In the Rockies, researchers have recovered everything from frozen trees that document important changes in climate and vegetation to the hunting implements of some of the first peoples of the continent.”

Dr. Taylor’s own work focuses on the relationship between climate and social change in early nomadic societies. His ongoing survey of melting ice margins in the Altai Mountains of western Mongolia has produced artifacts that upended some of the most basic archaeological assumptions about the area’s history. Although people in the region have long been classified as herders, Dr. Taylor’s team discovered an icy killing ground of argali sheep, along with the spears and arrows used to slay them. Laboratory analysis revealed that big-game hunting has been an essential part of pastoral subsistence and culture in the Eastern Steppes for more than 3,500 years.

About 10 percent of the planet’s land mass is covered with glacial ice, and as the world defrosts, ancient creatures great and small are being unburied as well. In southern Chile, dozens of nearly complete skeletons of ichthyosaurs were disgorged near the Tyndall Glacier. The marine reptiles lived between the Triassic and Cretaceous periods, which extended from 66 million to 250 million years ago.

Three-million-year-old insect fossils have been recovered in eastern Alaska (blind weevils of the genus Otibazo) and the western Yukon Territory (the species Notiophilus aeneus, better known as brassy big-eyed beetles).

The flashiest archaeological finds in Yakutia, a republic in northeastern Siberia, have been the carcasses of woolly mammoths, woolly rhinos, steppe bison and cave lions — big cats that once roamed widely across the northern hemisphere. The extinct beasts had lain suspended in their refrigerated graves for nine millenniums or more, like grapes in Jell-O.

In 2018, a perfectly intact 42,000-year-old foal — a long-gone species known as the Lena horse — was found entombed in the ice of Siberia’s Batagaika Crater with urine in its bladder and liquid blood in its veins.

That same year, in other parts of Yakutia, mammoth hunters chanced upon the severed head of a vanished subspecies of wolf, and researchers dug up an 18,000-year-old puppy that looked like nothing alive today. “The canine may have been an evolutionary link between wolves and modern dogs,” said Love Dalén, a Swedish geneticist who has sequenced the creature’s genome. “It is named Dogor, which means ‘friend’ in the Yakut language and is also a clever play on the question ‘dog or wolf.’”

Dogor was exhumed in an icy lump of mud near the Indigirka River. Ice patches turn out to be where most discoveries are made. The basic difference between a glacier and an ice patch is that a glacier moves. An ice patch does not move much, which makes it a more reliable preservationist.

“The constant movement inside glaciers damages both bodies and artifacts, and eventually dumps the sad debris at the mouth of the ice floe,” Dr. Pilo, of the Glacier Archaeology Program in Norway, said. “Due to the movement and the continuous renewal of the ice, glaciers rarely preserve objects more than 500 years.”

Dr. Lee, of the Institute of Arctic and Alpine Research, likens the destruction wrought by glacial degeneration to a library on fire. “Now is not the time to stand around pointing fingers at one another trying to lay blame for the blaze,” he said. “Now is the time to rescue what books can be saved for the edification of the future.”

It’s a grim inside joke among glacial archaeologists that their field of study has been one of the few beneficiaries of climate change. But while retreating ice and snow makes some prehistoric treasures briefly accessible, exposure to the elements threatens to swiftly destroy them.

Once soft organic materials — leather, textiles, arrow fletchings — surface, researchers have a year at most to rescue them for conservation before the items degrade and are lost forever. “After they are gone,” Dr. Taylor said, “our opportunity to use them to understand the past and prepare for the future is gone with them.”

E. James Dixon, former director of the Maxwell Museum of Anthropology at the University of New Mexico, agreed. “The sheer scale of the loss relative to the number of archaeologists researching these sites is overwhelming,” he said. “It’s like an archaeological mass extinction where certain types of sites are all disappearing at approximately the same time.”

Climate change has brought with it a cascade of consequences. Oceanfront erosion has been devastating. In some parts of Alaska, as much as a mile of coastline has receded over the last 80 years, and with it the entire archaeological and fossil record. “Sites are not just being washed away, but literally rotting in the ground,” Dr. Knecht said.

“Saving what we can isn’t just a matter of safeguarding Yup’ik culture or northern prehistory, but the heritage of all humanity,” he said. “After all, hunting and foraging is how all humans lived for the vast majority of our collective existence on earth.”