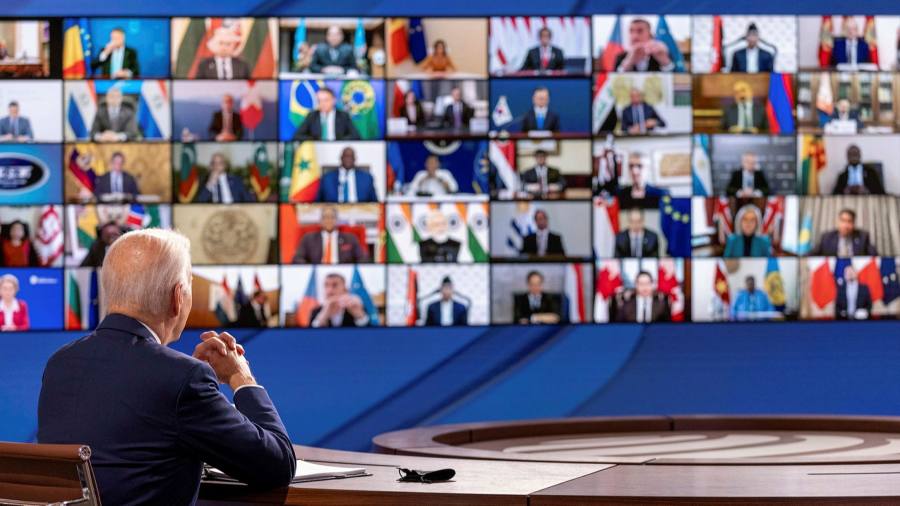 US president Joe Biden came to office proclaiming that the defining issue of the current era was whether democracies would prove more successful than non-democracies. Nearly a year later, the challenges to democracy have only intensified. Washington has warned that China seems to have been rehearsing for military operations against Taiwan; Biden this week held a video call with Vladimir Putin after Russia positioned tens of thousands of troops near Ukraine’s borders. Yet the president’s handling of the epochal contest — notably with his ill-conceived online “Summit for Democracy” this week — has appeared less sure-footed than many allies hoped when he was elected.

Biden dealt with elements of the Putin meeting well. Unusual intelligence-sharing with Nato and EU members helped to rally support for deterrent measures against a Russian invasion of Ukraine. The threat of sanctions such as blocking rouble conversion into dollars and restricting Russian sovereign debt trading on secondary markets should give the Kremlin serious pause. Western allies have signalled the newly-built Nord Stream 2 gas pipeline under the Baltic Sea to Germany could be blocked if Russia invades — though this nakedly geopolitical project should have been stopped long before now.

There were arguments, too, for Biden to challenge Putin to de-escalate by offering talks related to Moscow’s concerns about Nato’s potential expansion to Ukraine. Yet the US president went about this the wrong way. It is not clear he made a pullback of Russian forces a precondition. By signalling inclusion of Russia and four larger Nato allies, he played into Putin’s attempts to return to great power bargaining. Biden had to reassure Ukraine’s president Volodymyr Zelensky and nine eastern European Nato members that he had not made concessions to Russian pressure and that Ukraine will be “at the table” for any talks where it is on the agenda.

Those calls made an awkward backdrop to day one of Biden’s misjudged summit of democracies. Formal organisations have long existed that require adherence to democratic values, notably Nato and the EU. Convening an informal “club” of democracies raises awkward questions over who gets invited. Why the illiberal Polish government, but not Hungary? Why India, a US ally whose democracy is moving in the wrong direction, not Turkey? Why some weak African democracies, but not some more established ones from Asia?

White House officials have hinted that the diversity was intended to signal the summit was not a self-congratulatory exercise and all democracies have room for improvement, including the US — after protesters stormed the Capitol in January. There may be value in sharing notes on tackling corruption and institution-building. Yet there is a danger of giving credence to the autocrats’ propaganda that democracy is on the wane — especially in Biden’s message of a “global democratic recession”.

Even then, such initiatives risk provoking counter-alliances. The Russian and Chinese envoys to the US wrote an unusual joint article accusing the Biden administration of cold war-style stoking of “ideological confrontation”.

For America, resolve, self-belief and clarity on its own red lines and readiness to defend them are key to bolstering democracy. Freedom House, which has tracked the recent decline in global democracies to which Biden referred, also warns leading nations must “put their own houses in order”. This is a matter for Republicans, too; Biden lacks the votes to enact protections for US democracy even as states pass laws to limit access to the ballot. Solidarity with fellow democracies matters, but so does leading by example.