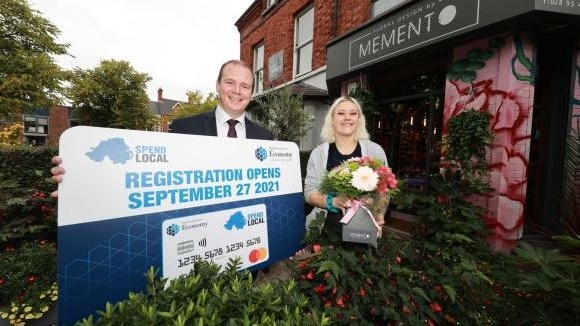 More than 1.4 million people have applied for the £100 Spend Local voucher scheme which closes for new applications at midnight on Monday evening.

The pre-paid card, which provides recipients with £100 to spend in shops in the North was made available to everyone aged 18 and over in Northern Ireland as a way of boosting the retail sector at a time it had been badly hit by the pandemic.

Approximately 900,000 people who have applied have not yet received their cards, but the Minister for the Economy, Gordon Lyons, told the BBC more would be dispatched “over the next few days.”

The cards can be used in all participating businesses in Northern Ireland. They cannot be spent online, or for gambling or some financial and legal services.

The Spend Local scheme is aimed at encouraging people back to high streets and supporting local businesses following the Covid-19 pandemic.

Mr Lyons said on Monday there were just “hours left” to apply and encouraged everyone who was eligible to do so.

He said local businesses were already “starting to feel the boost the Spend Local card brings”, adding that “I would encourage you to Spend Local [AND]use your £100 to help the businesses in your local area that were impacted by the pandemic”.

David Torrens, who owns No Alibis bookshop in Botanic Avenue in Belfast, said the scheme had brought in new customers.

“There are definitely some people who have come to shop here for the first time. They’ve decided they’re going to buy books with their £100, and are going to come and support us,” he said.

“I do think the scheme has brought people back to the shops, there was a concerted effort to encourage people to spend local during and after the first lockdown, and the voucher scheme has reinforced that.

Some businesses are offering incentives to people who spend their cards in their stores, or making a donation to charity. At No Alibis, 20 per cent of everything people spend using their cards will be donated to the charity Fighting Words NI.

“It’s important to pass some of this on,” says Torrens. “Not one business owner would have had any problem with the money in the voucher scheme going to the health service, but it came to us, so we’re distributing it in a different way.

“It’s certainly helping us, and because it’s being spent locally it will all get cycled back into the local economy in some way.”

People have until November 30th to spend the money on their cards.

Meanwhile, the Department has said the closure of the portal does not affect the approximately 100,000 people who have been asked for further information to verify their identity.

People who are eligible to apply for the scheme can do so until midnight via the NI Direct website.