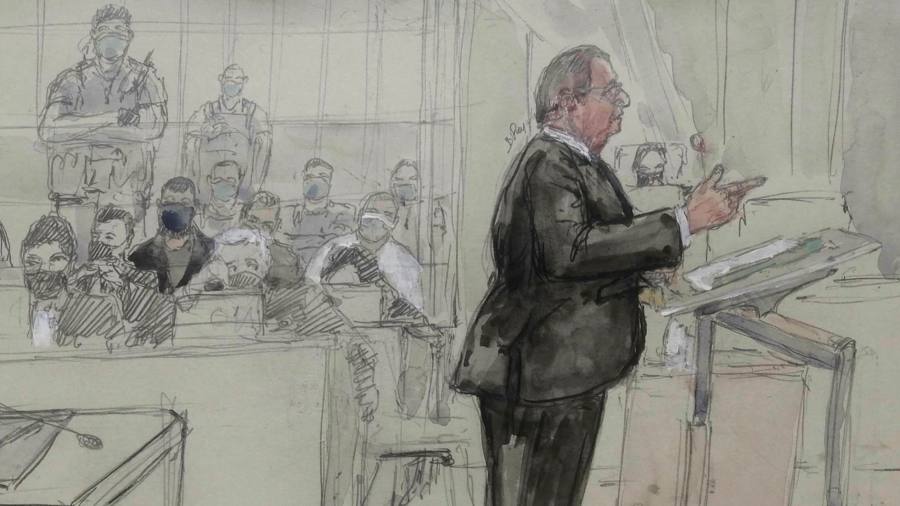 François Hollande had just finished four hours of testimony in the terrorism trial of 20 men accused of carrying out the November 13, 2015 attacks in Paris when one of them stood up as if to address the packed courtroom.

It was Salah Abdeslam, the only surviving alleged member of the Isis-backed extremists who struck targets in the French capital, killing 130 people. A showdown loomed between the former president and the defendant, who had earlier in the trial justified the attacks as a moral response to French air strikes in Syria and blamed Hollande directly for them.

“Ah no, Mr Abdeslam, if you have questions you can go through your lawyers!” Jean-Louis Périès, the presiding judge, interjected to cut short the confrontation and end a marathon day of hearings.

Hollande’s presence and his stand-off with one of the alleged protagonists encapsulated how the criminal trial, now in its third month, has been acting as a cathartic moment for France. Not only is the country trying the individuals accused of the attacks at the Bataclan theatre, café terraces and Stade de France, it is also having a public reckoning over the events, and the damage they inflicted on French society.

A purpose-built courtroom in a heavily fortified Palais de Justice in Paris has become a stage for the accused, investigators, survivors and politicians in power at the time to give testimony, and for experts in psychology and sociology to explain the context.

The attacks were part of a traumatic period for France when Isis fighters returning from Syria and Iraq and French citizens who adhered to their cause carried out a series of deadly acts. They included killing journalists at Charlie Hebdo magazine in January 2015 and the truck rampage in Nice in July 2016.

On Wednesday Hollande appeared as a witness called by a victims’ group as is permitted in France, not by the prosecution or the defence, and neither he nor the state are on trial. They wanted him to recall his experiences that night when he was in the Stade de France crowd for a football match, his decision to order the assault to end the Bataclan siege and the government’s actions before and afterwards.

Sharon Weill, a law professor specialising in terrorism trials at the American University of Paris, said having the former president appear was “a fascinating exercise” that showed how the trial was taking on a bigger role beyond simply judging the accused.

“This is not only a criminal proceeding, it is also a truth commission where the victims can come to speak, and now the political context in which these attacks occurred is also being explored,” she said. “Of course the state is not on trial here but the president did have to respond to questions. The courtroom has become a bit like a democratic forum.”

The French media often call the trial hors norme, meaning abnormal or exceptional. The term reflects the scale and drama of the proceedings that are expected to run until next May. France is aiming to prove that its judicial institutions are up to the challenge of trying the men accused of perpetrating the deadliest peacetime attacks on its soil.

Most of the November 13 attackers died that night or soon after in police raids, except for Abdeslam, who allegedly had an explosive vest that night that he never detonated. The other defendants are accused of helping him escape to Brussels, providing logistical support such as fake identity papers, or being part of Isis cells plotting attacks in Europe.

The first month of testimony was from investigators about the attacks and the subsequent manhunt; then came five weeks of emotional accounts from survivors and their families.

Last week, the accused gave so-called personality testimony about their upbringing and character. In contrast to his earlier aggressive statements, Abdeslam was conciliatory as he recounted a peaceful childhood in Brussels’ Molenbeek neighbourhood and admitted a penchant for gambling and nightclubs. His mother and sister are also expected to testify. Evidence about the defendants’ religious views and radicalisation will be heard at a later stage.

It was Mohamed Abrini, Abdeslam’s childhood friend and co-defendant, who delivered the most memorable line when he said: “We did not come out of our mothers’ wombs holding Kalashnikovs.”

There was little such levity on Wednesday when some defence lawyers sought to block Hollande’s appearance and those of sociologists specialising in Islamic extremism, arguing that they had no value as evidence. “Do not let this trial be used as a political platform,” pleaded one. The judges overruled them.

Lawyers representing the victims asked Hollande several times whether everything possible had been done to prevent the attacks. Some implied that intelligence services had not followed up warnings in summer 2015 that attacks were being planned against unspecified concert halls.

“We did not know where, when or how they would strike,” said Hollande, although he admitted that they did know Isis wanted to carry out attacks in Europe.

Defence lawyers demanded an explanation of how France legally justified air strikes on Isis targets in 2014-15, while another contemplated whether the “war on terror” waged by the US and its allies since September 11, 2001 had merely served to create more extremists.

“I see that the defence lawyers are into international politics and not criminal justice,” said Hollande with characteristic irony.

Xavier Nogueras, a veteran defence lawyer in terror cases, asked the day’s last question: “If everything that could have been done was done, what went wrong in your view? Is terrorism inevitable?”

Hollande replied: “There will be other terrorist acts, and democracies must find answers to them, in the law.”