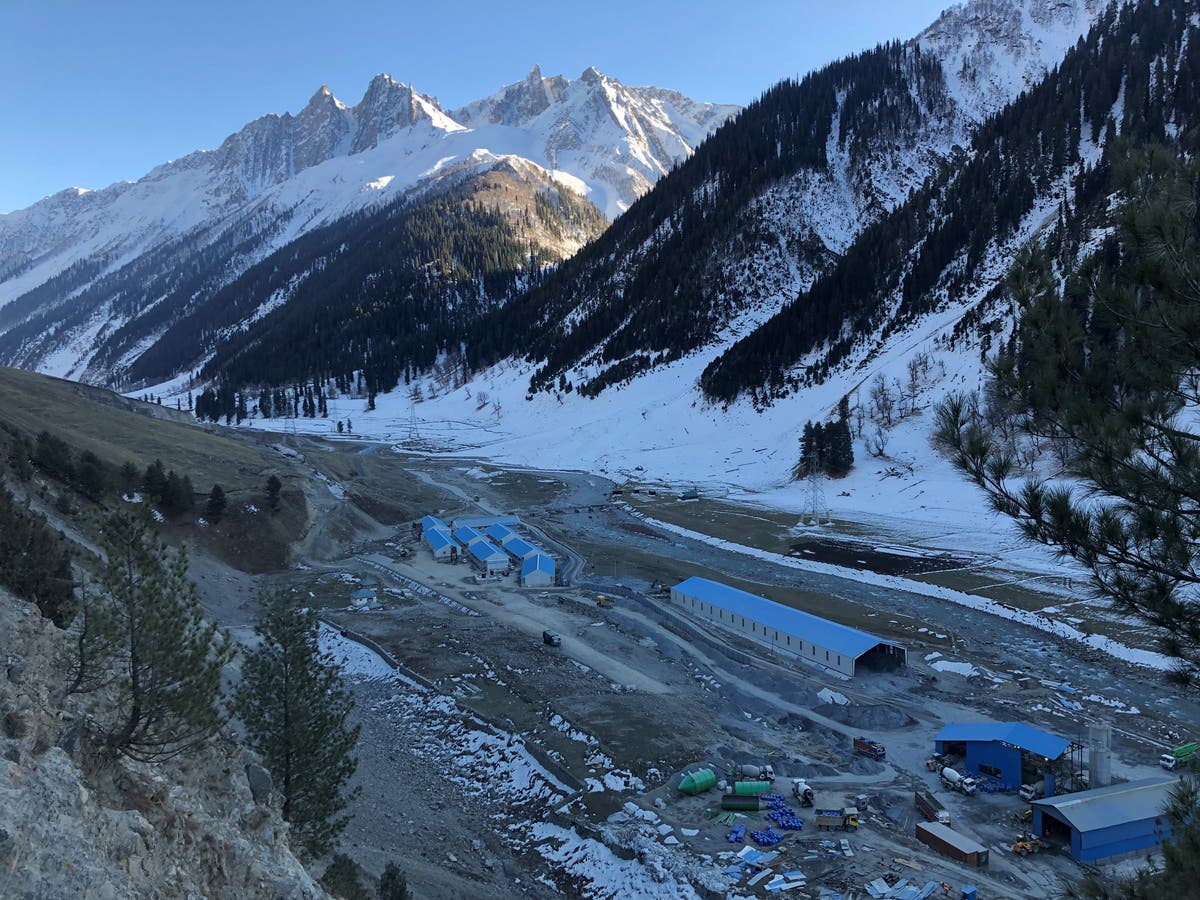 The construction crew peered into two inky shafts bored into a rocky cliff face, bracing themselves against the bitter cold and the impending blast.

Harpal Singh gave the go-ahead. The mountain was rocked by a thunderous explosion and, moments later, patriotic cheers. India was one step closer to completing a strategic priority: a series of new tunnels and roads leading to the increasingly militarised border with China.

The tunnel will, “safeguard the territorial integrity of our motherland”, says Singh, an engineer overseeing about 1,700 men racing to finish one stretch of the $600m (£450m) upgrade. Down the twisting single-lane road from their work site were parked construction machinery, heavy trucks hauling winter supplies for the army and armoured vehicles under camouflage-patterned tarpaulins, all preparing to make an arduous drive to the border that will become substantially shorter once the construction is finished.

“We understand the importance of this project,” Singh says. “It’s the vital supply line to the border with China.”

High in this corner of the Himalayas, an expanse of snowy peaks and glacier-fed rivers claimed by both China and India, a tense standoff between the two armies is spurring a flurry of infrastructure and military buildup that’s transforming one of the world’s most remote and inhospitable regions.

On the Chinese side of the unmarked border, new helicopter pads, runways and railways have been laid on the Tibetan plateau, according to satellite images and state media reports. On the Indian side, officials are rushing construction on the Zoji La tunnels, upgrading several strategic roads and unveiling new cell towers and landing strips. Both countries have deployed more military force to the border. India is diverting nearly 50,000 mountainous warfare troops there, according to current and former Indian military officials. In recent months, both militaries have publicised combat readiness drills to practice airlifting thousands of soldiers to the front lines at a moment’s notice.

Following 13 rounds of inconclusive negotiations between military commanders since June last year, the standoff is now entering a second winter, an unprecedented development that is stretching logistics and budgets – especially for India. But the result, observers say, is a normalisation of a hardened border and a fragile stalemate between two Asian powers that could last for years.

“The thinking was always we could handle China politically, diplomatically, but that feeling changed,” says Hooda, who directs think tank the Council for Strategic and Defense Research in New Delhi.

The deployed troops require, “huge infrastructure to support them, huge reserves to replace them,” he adds. “But even if there is a diplomatic process, the fact is that suspicions are going to remain. There’s no way of returning to the status quo.”

The question of where India ends and China begins has been the subject of negotiations by various parties including the British Empire and the Qing Dynasty and an independent India under prime minister Jawaharlal Nehru and communist China led by Mao Zedong. The roughly 2,100-mile border does not cleave through significant natural resources or population centres but the dispute over where exactly it lies has led to a bloody war and several skirmishes.

The current impasse began in May last year, when Chinese patrols objected to Indian construction on a strategically placed road in Ladakh, inside territory that China claimed. The faceoff culminated in a brawl that killed scores of soldiers in June.

Infrastructure construction also sparked earlier flare-ups. In 1957, China built a road linking the two vast and restive regions of its western periphery – Tibet and Xinjiang – that crossed an expanse of salt flats that India claims to be part of Ladakh. Tensions over the road simmered and contributed to the Sino-Indian War of 1962 in which China attacked India and thousands of men died on both sides in freezing conditions.

In 2017, Chinese workers sought to build roads near India’s Sikkim state before they were stopped by Indian troops, creating a diplomatic crisis.

India needs to firm up its border by building infrastructure not only for its military but for its civilians, says Sonam Tsering, a former village councillor from Chushul, which overlooks a lake where new structures housing Chinese troops have appeared over the past year.

Nearby Demchok village, which didn’t have electricity a decade ago, only got its first mobile phones mast in November, Tsering says. Basic roads are still lacking in the region and many residents are simply moving away due to poor living conditions, which erodes India’s territorial claims, he says. Last month, a village leader wrote a letter to India’s defence minister pleading for reliable electricity, basic hospitals and roads and phone masts for nine villages without service.

“The Chinese villages across the Indus River have had multiple towers for the past 15 years, with cable TV, electricity lines, big concrete houses, wide, paved roads,” Tsering says. “China gives citizens incentives to live in these forward villages because they know civilians living there are the first line of defence.”

A Pentagon report in November said China has recently built a small settlement in disputed territory on the eastern section of the India-China border. Military infrastructure has also boomed: Satellite imagery suggests that in 2019 and 2020, China finished expansion projects on about 20 helipads or airstrips bordering India, says Sim Tack, a former military analyst for Stratfor, a private intelligence firm.

Both Indian prime minister Narendra Modi and Chinese president Xi Jinping have equated infrastructure with national security. After Indian and Chinese troops clashed last summer, Modi vowed to triple spending on border infrastructure and assured troops in Ladakh that India’s enemies had tasted its “fire and fury”. This year, Xi traveled to Tibet for the first time to inspect a new railway leading to the Indian border, then told People’s Liberation Army officers at a command centre to, “comprehensively strengthen training and preparation work”.

Wang Xiaojian, spokesman for the Chinese embassy in New Delhi, said China was committed to peace at the border and considered the situation “stable and controllable”, while adding that China would firmly safeguard its territorial sovereignty. Indian ministry of external affairs spokesman Arindam Bagchi said the two countries’ foreign ministers met most recently in September in Tajikistan and agreed to continue talks between diplomats and military commanders to resolve the remaining issues.

Christopher Clary, an expert on India-China military relations at the US University of Albany, said the border buildup has been “asymmetrically” more taxing for India than China, which has a defence budget that is 3.5 times larger and a GDP six times greater. Chinese leaders have historically been wary of antagonising India, Clary says, but they could afford to prolong the standoff as a way to punish India for its growing closeness with the US and its allies.

“There must be concern… and Beijing may want to use demonstrative force to show there are red lines,” Clary says, noting that Mao attacked India in 1962 after sensing Nehru’s closeness with his rival, Soviet leader Nikita Khrushchev.

In the decades following India’s defeat in 1962, Nehru intentionally avoided building infrastructure in Ladakh, fearing that roads might help the Chinese army descend the Himalayas and march on the Indian capital, says Srikanth Kondapalli, a professor of Chinese studies at Jawaharlal Nehru University.

But today, the thinking in New Delhi has flipped. On the road to Ladakh on a recent afternoon before the start of the snow season, dozens of heavy trucks painted with pictures of Sufi saints idled at a weigh station, their drivers milling about.

“I have been travelling on this road for the past 35 years but never seen it as busy as it is now,” says Nazir Ahmad Wani, 65, a Kashmiri driver who was bringing machinery and winter supplies to the border.

He recalls volunteering to shuttle goods during the 1999 Kargil War, when Pakistan shelled the road. Now, about 200 out of 500 trucks every day are again carrying military supplies, Wani estimates. There’s no shooting, he says, but a familiar sense of tension.

“It’s scary to see lots of men and weapons being ferried every day to Ladakh,” Wani says. “It’s as if something big is about to happen.”

Pei Lin Wu in Taipei contributed to this report.