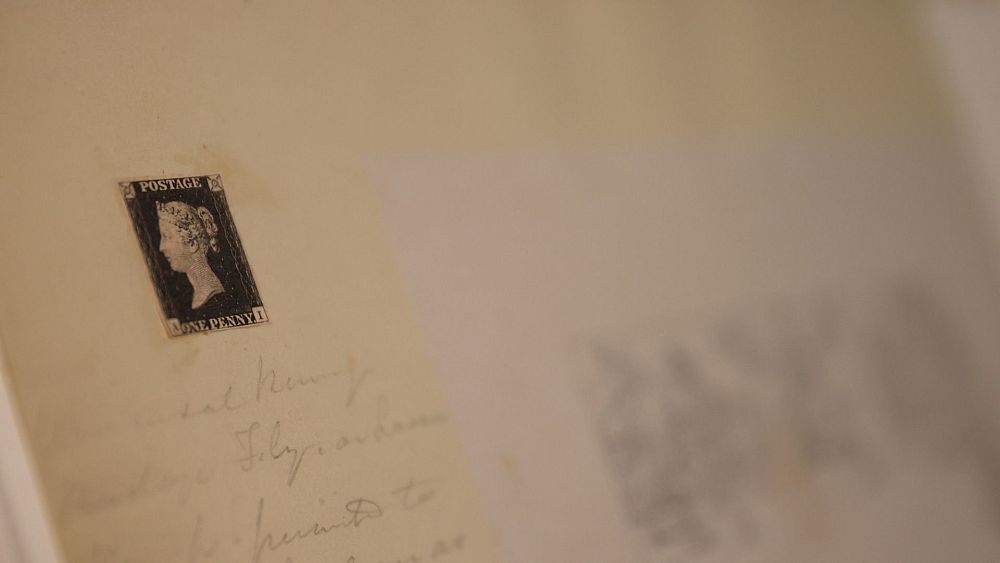 The world”s first-ever stamp will go up for auction in a few weeks’ time.

An unused Penny Black is part of a document that’s expected to sell for between €4 and 7 million.

The Penny Black was the world’s first stamp – and this one is from the very first sheet of them ever printed.

It’s part of a paper known as The Wallace Document, which came from the scrapbook of leading British postal reformer, MP Robert Wallace.

It was created in 1840 but is still in absolutely pristine condition.

One of three stamps from the world’s first sheet

There are believed to be only two other examples of perfect, ungummed Penny Blacks from the first printing, both in the collection of the British Postal Museum.

The Wallace Document is owned by philatelist and businessman Alan Holyoake.

As one of the world’s leading stamp collectors, he’s seen many rare items in his time. But for him, this one is extra special.

“It is a world icon,” he says. “A stamp that came from the very first sheet of stamps that were printed.”

How did a British businessman find and purchase the world’s first stamp?

At the time, rumours circulated that the stamp was one of the first Penny Blacks ever printed.

But it took three years of painstaking research to prove that was true and get official authentication from The Royal Philatelic Society, London and the British Philatelic Association.

That certification has raised its value significantly.

And a recent stamp sale has stoked Holyoake’s hopes that The Wallace Document will fetch a record-breaking price when it’s auctioned later this year.

“The value that’s being put at the moment for the auction of the Wallace Document is in sterling between four and six million. So, it’s a bit different to the price I paid,” he explains.

The beginning of mass communication

Holyoake believes says he’ll be disappointed if it doesn’t reach similar figures to the Guyanan sale. He believes his treasure represents the “beginning of mass communication”.

Also included in the Wallace Document is a proof of the ‘Mulready Stationary’.

Essentially an official, printed envelope, it was designed to be the primary method of prepaying postage, with the Penny Black stamp simply a top-up option for excess postage costs.

But it was the little Penny Black, rather than the ornate Mulready, which proved a success, and the rest, as they say, is postal history.

“I’m a philatelist, so I would hope a philatelist would buy it. I don’t believe that will happen, because few philatelists could afford what we’re now talking about,” he says.

“I do hope that someone who buys it actually understands its importance as being a world icon. A world icon, not as a stamp, but a world icon as being an important first when it comes to social history and communication.”

The world’s first Penny Black and The Wallace Document will be auctioned by Sotheby’s on December 7.